Claressa Shields Injured; Habazin Fight To Be Rescheduled For Fall 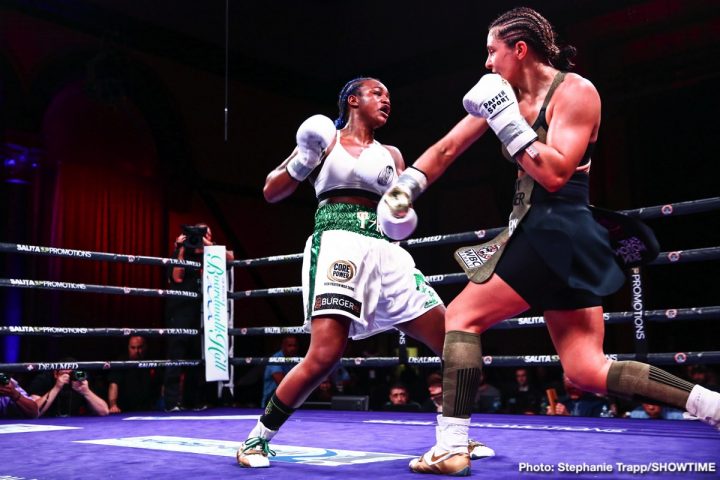 A minor injury in training has forced undisputed middleweight world champion Claressa Shields to suspend training and postpone her bid to become the fastest fighter in boxing history, male or female, to become a three-division world champion.

24-year-old Shields (9-0, 2 KOs) says she looks forward to resuming training and having the fight take place this fall.

“There’s nothing I love to do more than boxing, and I train hard for all of my fights. It’s going to be tough for them to keep me out of the gym for a few weeks,” said undisputed champion Claressa Shields. “But I will heal quickly and then go to training camp, so I can make history in front of all my fans in the fall. I can promise you this – I’ll be training harder than ever soon again, and I will provide a spectacular performance and make history for everyone in attendance and for the viewers on SHOWTIME.”

Shields’ promoter, Dmitriy Salita, says a new date for the fight is already being hammered out, as he works feverishly behind the scenes.

“Claressa will bounce back quickly,” said Salita. “Unfortunately, training injuries are part of the sport. A great champion like her will take it in stride and move forward to the new fight date we are currently working to finalize. The fight will be rescheduled for the fall and we will announce the new date shortly.”

Undisputed middleweight world champion Claressa Shields will aim to make history by becoming the fastest fighter in boxing, male or female, to become a three-division world champion when she takes on former world champion Ivana Habazin Saturday, August 17 live on SHOWTIME. The showdown for the vacant WBO Junior Middleweight Title headlines a SHOWTIME BOXING: SPECIAL EDITION telecast at 9 p.m. ET/PT from Dort Federal Event Center in Shields’ hometown of Flint, Mich. The vacant WBC Women’s Diamond Super Welterweight Championship will also be on the line in Shields’ first professional fight in her hometown.

Ticket information for Shields vs. Habazin

Shields vs. Habazin is promoted by Salita Promotions. Ticket for the live event go on sale Thursday, June 20 at 3 p.m. ET and can be purchased at Ticketmaster.com and at the Dort Center box office.

Shields coming off of win over Christina Hammer

The 24-year-old Shields (9-0, 2 KOs) is a two-division titlist who became the undisputed middleweight champion with a near-shutout victory over Christina Hammer in April on SHOWTIME. In doing so, she joined Terrence Crawford, Jermain Taylor, Bernard Hopkins, Oleksandr Usyk and Cecilia Braekhus as the only fighters to have unified all four major world titles in any weight class (Katie Taylor has since joined the prestigious list).

Now, the Flint star seeks to make even more history in her sixth headlining appearance on SHOWTIME. With a win over Habazin on August 17, Shields would become a three-division champion in just 10 bouts, breaking the record of Vasiliy Lomachenko, who accomplished the feat in 12 fights.

“It’s hard to even put into words how excited I am to be returning home as undisputed champion and fighting in front of all my fans in Flint,” said Shields. “And having the opportunity to become world champion in a third weight division faster than any man or woman in boxing history will make August 17 a night I will cherish forever. It’s another big step forward in lifting women’s boxing on the road to equality.”

Habazin (20-3, 7 KOs), of Zagreb, Croatia, is ranked No. 1 by the WBO at 154 pounds. The 29-year-old, who will be making her U.S. debut, won the IBF Welterweight Title over Sabrina Giuliani in 2014. In her next fight, Habazin dropped a unanimous decision to Braekhus in a historic unification bout where Braekhus picked up all four major world title belts. Most recently, Habazin avenged one of only three losses in her career to Eva Bajic in Zagreb.

“I’m honored to fight on SHOWTIME and to be making my debut in the U.S.,” said Habazin. “It’s a dream come true and this is a huge chance for me to prove that I am one of boxing’s elite fighters. I will not let this opportunity pass. I’m not just coming to the U.S. to fight, I’m coming for victory.

“I’m actually a big fan of Claressa. She made history for women’s boxing and will be a great opponent for me. She’s very confident in herself, she’s aggressive, she can move, she has speed and good defense. But I have all of this too, and I can punch. I can’t wait to see what she is made of. They said her fight against Hammer was the biggest of all time, but I think this one will be the greatest ever.”

“Without question, Claressa Shields is the face of women’s boxing and we’re excited to present yet another historic milestone in her career as she looks to capture a third division championship in record time,” said Gordon Hall, Executive Producer of SHOWTIME BOXING: SPECIAL EDITION. “From the amateurs to the pros, Claressa has faced the best opposition available and won every test in dominant fashion. With a victory over Habazin in her sixth appearance on SHOWTIME, Claressa will further solidify herself as the top female fighter in boxing and continue her personal quest to become the greatest of all time.”

“I am delighted to promote another historic event featuring Claressa Shields, who strives to make history at a record-setting pace when she challenges herself to go down in weight to win a third division title against a very skilled and motivated fighter in Ivana Habazin,” said Dmitriy Salita, President of Salita Promotions. “Fans attending the fight at the Dort Center in Flint, as well as those watching the fight live on SHOWTIME, will be treated to another historic and exciting night of boxing featuring Shields.”

“August 17 will be a magnificent event for Claressa Shields, for women’s boxing, and for Claressa’s hometown city of Flint,” said Mark Taffet, manager of Claressa Shields. “Claressa continues to shine a beacon of light on the sport, making history in each and every fight and reaching levels previously unimaginable. She is a once in a lifetime athlete and young woman, and if she is victorious on August 17 she will move one step closer to realizing her dreams by becoming the fastest man or woman in boxing history to win a world title in a third weight division.”

“The world’s attention will be on women’s’ sports this summer with two of its’ biggest events in the FIFA women’s World Cup, which is just getting started, and another Shields’ blockbuster event happening in August,” added Salita. “We’re continuing our goal of advancing the state of women’s sports to new heights and Claressa’s greatness helps make this happen.”

The undercard for the telecast will be announced in the coming weeks.