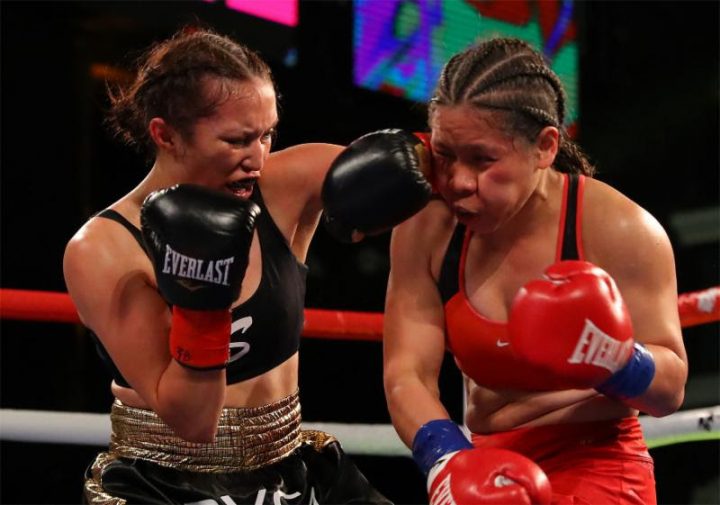 Seniesa “Superbad” Estrada (17-0, 7 KOs) overcame her toughest challenge yet as she defeated Gretchen “Chen Chen” Abaniel (18-11, 6 KOs) via technical knockout to defend her WBC Silver Light Flyweight Championship in the scheduled 10-round main event of the June 13 edition of Golden Boy DAZN Thursday Night Fights at Avalon Hollywood. Abaniel was not able to continue after the fourth round, handing Estrada the victory.

“Everyone knows about the rivalry between me and Marlen Esparza,” said Seniesa Estrada. “Eventually, that fight is going to happen. She can get it any time. For now, I want a title shot. I want to face Yesenia Gomez. Let’s make it happen in September.”

Armenian contender Azat Hovhannisyan (17-3, 14 KOs) overpowered Glen Porras (32-9, 20 KOs) of Cotabato, Philippines en route to a fourth-round technical knockout in a super bantamweight battle originally scheduled for 10 rounds. The fight was stopped at 2:08 of the aforementioned round.

“I had a great preparation,” said Azat Hovhannisyan. “I sparred very hard and everything went well in camp. I’m boxing more in my fights, but I also bring a lot of action. I want T.J. Doheny, and then I want Danny Roman, Rey Vargas [again] and Emanuel Navarrete.”

Carlos Caraballo (12-0, 12 KOs) of Guayanilla, Puerto Rico defeated Esteban Aquino (12-7, 7 KOs) of La Romana, Dominican Republic via knockout in the second round of a super bantamweight fight originally slated for six rounds. Caraballo won with time of 1:52 of the aforementioned round.

“That’s what I was trying to do, get a spectacular knockout,” said Carlos Caraballo. “I have the power to do it, and that’s what I trained for at the gym. I noticed he wasn’t really attacking in the second round. We take things round by round, so I saw the opportunity and took it.”

“We knew he was a hard hitter,” said Cesar Valenzeula. “We knew he would come in throwing wild punches and that he had no defense, footwork or head movement. So, I used my distance, jab, and footwork. I also was able to get him with my straight right hand, which he could not see coming.”

Bektemir Melikuziev (1-0, 1 KO) made a successful professional debut by stopping Marin Rios (23-20-4, 13 KOs) of La Pampa, Argentina via knockout in a scheduled six-round light heavyweight fight. Melikuziev ended at matters at 1:39 of the first round.

“What happened is what always happens,” said Bektemir Melikzuiev.”I wanted the toughest challenge out there, and I went in there and took care of business. Now it’s time for me to keep going and stay busy.”

Estrada vs. Abaniel was a 10-round fight for the WBC Silver Light Flyweight Title presented by Golden Boy. The event was sponsored by Tecate,”THE OFFICIAL BEER OF BOXING.” The fights took place Thursday, June 13 at Avalon Hollywood. The event was streamed live on RingTV.com and on Facebook Watch via the Golden Boy Fight Night Page. The series is also available on regional sports networks around the nation.

The 46-year-old Rivera fought professionally for the 50th and final time, at home in “Quest For 50,” presented by Shearns Boxing Promotions and Rivera Promotions Entertainment, Rivera (43-6-1, 25 KOs) stalked his elusive opponent, cutting off the ring and firing punches to the head and body of 38-year-old Scott (19-6, 5 KOs). His aggression, guile and the same determination and displayed throughout his career.

The only knockdown of the fight came near the end of the fifth round, when Scott caught Rivera with a right on the top of the head. The three judges scored the fight: 77-74 and 76-75 for Rivera, 76-75 for Scott.

“I thought I was winning the fight,” Rivera aid after the fight,” but I felt that I had to put my punches together in the last few rounds. It was a flash knockdown; I wasn’t hurt at all. It all comes down to training. I tell young fighters to train, train, train until they’ve given 100-percent and train a little more. I was the busier fight and kept throwing multipole punches to his one at a time.

“This was definitely my last fight. It’s time for my new career. (Rivera was recently promoted to Associate Chief Court Officer.) Every time you go into the ring, you want to win, especially the last one. It was great to win my last fight in my hometown of Worcester.”

Rivera lost 40-pounds in five months to prepare for his fight. He improved his pro record in Worcester to 15-1 (6 KOs).

In the co-featured event, New England middleweight champion Kendrick “Peppa” Bell, Jr. (13-1-2, 9 KOs), another Worcester fighter, got into a rough firefight with the unorthodox Honduran super middleweight Juan Celin Zapata (6-15-2, 4 KOs) in a non-title fight. Ball floored Zapata twice in the opening round, once in the second, and three times in the third. Referee Paul Casey called off the fight after the seventh final knockdown in round three.

Worcester favorite Owen “The Problem” Minor (2-0, 2 KOs, arguably the most promising Massachusetts-born heavyweight prospect of this century, needed only 31-seconds to take care of pro-debuting Jpseph Raposo (0-1), knocking him out with a single left hook.

The New England junior welterweight title remains vacant, because the fight between Sydney “Keelo” Maccow (6-8, 3 KOs) and Anthony Everett (1-7, 1 KO), on the advice of the ring physician Dr. Peter Warner, their fight was stopped after two rounds due to a massive hematoma on Everett’s forehead, resulting from an unintentional headbutt.

Hartford welterweight “The Special One” Sharad Collier (2-0-1, 2 KOs), a two-time New England Golden Gloves champion, overwhelmed his opponent, Bruno Dias (0-8), knocking him to the canvas three times. The last trip resulted in referee Kevin Hope waving off the fight with 30-seconds left in round one.

Worcester junior lightweight Philip “Rock Solid” Davis (2-1-1, 1 KO) and Henry Garcia
(0-3-1), from New Bedford, MA, put on quite a show, pounding each other from the opening bell until the final whistle in a very entertaining match. Davis won each round on all three judges’ scorecards for a win by way of a four-round unanimous decision.

Providence welterweight Elijah Peixoto (1-0, 1 KO) turned in a superlative pro debut, dropping Carlos Galindo (1-12) three times in the opening round and twice in the second, the last with a vicious body shot after which referee Hope immediately halted the fight.

Welterweight prospect Angel Ruiz (14-0, 11 KOs), who said in prefight interviews that he wanted to deliver a knockout win in his main event debut, did just that in dispatching veteran Miguel Zamudio (43-13-1, 27 KOs) at the 1:37 mark of the first round.

Ruiz, 21, nailed Zamudio with a left hand from his southpaw stance. He quickly followed up with a bevy of punches that overwhelmed Zamudio and earned Ruiz his fifth straight win by stoppage.

“I did what I came here to do,” said Ruiz, who was born in Mexico, but lives in Los Angeles. “I’m just happy I was able to finish this early and give the fans something to talk about.”

Ruiz came out fast as lightening, as his nickname, “Relampago,” suggests.

“He looked really sharp and in command right from the start,” said Doug Fischer, TB Presents color commentator. “I wanted to see more of him, but that’s what happens when you end a fight early.”

Ruiz, indeed, looked crisp and polished. Sporting a ripped physique, Ruiz jumped on Zamudio from the opening bell, shooting a rapid fire right jab and following it up with the powerful left hand.

“My jab opens up a lot of angles,” Ruiz said. “I caught him with that left and it was over after that.”

In the co-feature, junior middleweight prospect Richard Brewart (6-0, 2 KOs) outpointed late replacement Antonio Duarte (2-1) through six rounds. Brewart, who was fighting in his first six round fight, was able to use his size to walk down the smaller Duarte.

Brewart gained control of the fight with his steady pressure and versatile punching. He worked the body effectively and landed clean shots to the head when Duarte failed to cover up.

Hernandez was his usual self, firing punches from a variety of angles that restricted Garcia from gaining any kind of foothold. Garcia countered Hernandez on a numerous occasions, but it wasn’t enough to produce a victory.

Heavyweight Oscar Torrez (6-0, 3 KOs) knocked out late replacement Allen Ruiz (0-2) at the 1:08 mark of the third round. Torrez, who hit the canvas for the first time in his career in the opening round, dropped Ruiz twice in the second to set up the stoppage finish.

Torrez showed fast hands and strong combinations and was clearly the superior boxer. The knockdown he suffered in the first had more to do with being off balance than anything Ruiz cooked up.

Sanchez, who is trained by Joel Diaz, was the aggressor and landed nearly all the quality punches throughout the four round fight. Sanchez, 19, displayed advanced skills and periodically switched to southpaw in an attempt to confuse the more experienced Melo.

“Path to Glory” was presented by Thompson Boxing Promotions.

Mexicali native Dilan Loza took the WBF Mexico Welterweight title from reigning champion Ramon Barajas, with an impressive performance over ten rounds to win by wide unanimous decision. Barajas survived a first-round knock-down and fought back valiantly, but Loza controlled most of the fight with disciplined boxing.


« Sergey Kovalev and Anthony Yarde have agreed to terms