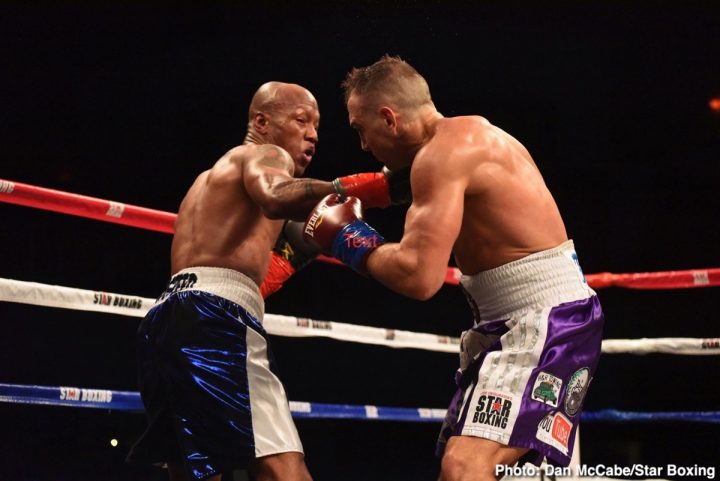 UPDATE ON ZAB JUDAH: After the fight, Zab Judah was brought to the hospital. He is currently admitted in the hospital. He is awake and communicating and making progress. At the present he & his family are just requesting privacy with respect to anything further and will have update Tuesday. All of us at Star Boxing are praying for him and his family and appreciate everyone’s concern.

The packed and enthusiastic crowd at the annual International Boxing Hall of Fame, Star Boxing promoted show at Turning Stone Casino, were treated to a throwback main event reminiscent of the 1950’s. CLETUS “THE HEBREW HAMMER” SELDIN (now 24-1 20KO’s)had a career best win over 6-time world champion ZAB “SUPER” JUDAH (now 44-10 30KO’s). Over the eleven rounds, Seldin threw, on average, over one hundred punches a round. From the opening bell, in his signature style, Seldin pounced on Judah and did not deviate from this plan until the ref called a stop to the onslaught at 1:40 into the eleventh round. At the time of the stoppage Seldin was pounding the 6-time world champion, Judah, against the ropes. According to Seldin, this was all part of the plan, “I knew I was in control from when the first bell rang . . . I am very awkward to fight, and my plan was to keep him off guard, and try and bring the fight forward,” and forward he clearly did, for literally every second of every round. The style was intoxicating to boxing fans and experts watching the fight who were astonished at the pace and pressure of Seldin.

Seldin implemented a crouched, bobbing and weaving, relentless come forward style, reminiscent of the 1950’s. Multiple times over the eleven rounds, Seldin turned southpaw, to keep the dangerous upper cut of Zab Judah at bay. In the third round, Seldin left Judah on unsteady legs after a monstrous right hand landed clean. Judah was able to tie up and survive the round. Judah attempted to subdue Seldin’s attack but found himself in survival mode for most of the fight as Seldin literally smothered him with continuous punches.

“We wanted [Cletus Seldin] to come out very fast in the first two rounds, like a bullet. Judah is a great fighter, but we knew down the stretch Seldin would have the advantage…” said one of Seldin’s trainers, SCOTT LOPECK, at the post fight press-conference. Those instructions and the shear tenancity of Seldin were the key to Cletus Seldin’s success and his earning the NABA Super Lightweight Title. Many did not give the Long Island product a chance for victory against the much more experienced Judah, but in the end it was Seldin’s consistent attack that broke down the six-time world champion.

What’s next for the new NABA Super Lightweight Champion? Star Boxing’s JOE DEGUARDIA knows that this was a huge win for Long Island’s warrior, but as for what is next, “it’s all about timing . . . [Seldin] just fought a six-time world champion, and we won’t find another name that big, even with the current champions. We want to keep him busy,” DeGuardia then joked, “Cletus has already asked to fight again at our June 28th show.”

Fans that came out to Turning Stone or watched live on FITE.TV saw a fantastic undercard. DAVID PAPOT (now 22-0-1 3KO’s) and JAMES MCGIRT JR. (now 23-7-5 14KO’s)went to battle over a 12-round Middleweight tilt. Both men attempted to gain the edge, working different angles, attempting to exploit the others’ weakness, however the fight went the full distance. The bout was scored to a split decision draw, and the vacant WBO International, and WBA Intercontinental Middleweight Titles remain vacant as a result of the draw. (scores were: 117-111 Papot, 115-113 McGirt Jr., 114-114 Draw)

Italian, “SUPER” MARIO ALFANO (now 14-1-1 3KO’s), ran into a buzz saw when he met Rochester’s LAVISAS “RED” WILLIAMS (now 9-1-1 3KO’s). Alfano attempted to press the action from the opening bell, coming forward for most of the fight, using combinations to the body and the head to score on Williams. However, Williams countered by using his impressive boxing abilities, fighting behind his stinging jab, and great movement. At the final bell, the judges ruled in favor of Williams, by unanimous decision. (78-74, 77-75 (2x))

WENDY “HAITIAN FIRE” TOUSSAINT (now 10-0 4KO’s) took on LUCIUS “BULLDOG” JOHNSON (now 4-6-1 3KO’s) in a tense battle, that had both fighters extreme boxing skills on display. Toussaint and Johnson began taunting one another in the middle rounds, both looking to mentally edge the other. In the end it was Toussaint, who used his length and incredible stamina to pitch a shutout on the game Johnson, by unanimous decision. (60-54 3x). Toussaint said “it felt really good to be back in there. I haven’t fought in while, and I really wanted to put him to sleep tonight, and landed a few punches that I thought would, but he fought hard and stayed on his feet. I am ready to get back into the ring as soon as I can.”

BOUBACAR “BOOBY TRAP” SYLLA (now 10-0 7KO’s) made his Star Boxing debut on Friday, when he faced off against the incredibly tough MARQUISE “THE HAWK” HAWTHORNE (now 7-11 1KO). Hawthorne, coming off of a unanimous decision win in April, which was his second win in a row against undefeated prospects and he looked to continue his success against Sylla. This was the fifth undefeated opponent for Hawthorne, in his last six fights. Sylla, attempted to rid himself of any ring rust and traded big shots with Hawthorne over the 6-rounds. Hawthorne came on late, but it proved to not be enough as Sylla earned the unanimous decision victory. (58-56 (2X), 59-55). “It felt great to be in the ring again,” said Sylla, “I was a little rusty at the beginning, but happy to come out with the win. I plan on speaking with my team and seeing what is next for me.”

In a 4-round battle of the undefeated, ROBERT DURAN JR. (now 3-0 2KO’s) narrowly outpointed a very tough JONATHAN “THE BOOGIE MAN” PIERRE (now 3-1) in a highly skilled outing from two young fighters. It was a pleasing battle in which Duran, the son of boxing legend Roberto Duran, pressed the action against the skilled boxer Pierre. Finally, ERIC ABRAHAM (now 6-4-1 3KO’s) earned the KO of the night when he went to battle with ALEX “LIGHTS OUT” VANASSE (now 4-1 4KO’s) in a cruiserweight bout, that brought the knockout of the night. With Abraham down on the cards, he turned it around with one punch in the third, violently dropping Vanasse, and finished off the fight four punches later, dropping Vanasse a second time, to earn the KO victory.

“George and Charles continued to prove they have all the attributes to fight for world titles in the future and I look forward to providing them the opportunities,” said Lou DiBella, President of DiBella Entertainment. “We’re very proud of both. They’ve worked very hard and now our job is put them in the best position to continue their climb in their respective divisions.”

Fighting in Athens, Greece, on Friday night, June 7, the 25-year-old Greek Aussie Kambosos (17-0, 10 KOs), of Sydney, Australia, stopped Richard Pena (11-3-1, 9 KOs) in the sixth round in front of a loud, supportive crowd at the Olympic Hall Galatsi. Dropping Pena in the fourth and fifth rounds, Kambosos continued to control the action as the referee called a halt to the action in round six following a barrage of unanswered punches.

“I fought a very smart, patient and explosive fight against a very tough young fighter who had an opportunity of a lifetime. Pena is a good young fighter who made a great account of himself with his long and awkward frame.

“I am a proud Greek and a proud Australian. Fighting in Athens, Greece, was an amazing experience,” said Kambosos, whose paternal grandfather originally came to Australia from Greece to begin a new life and raise a family.

Heading into the fight, Kambosos was world ranked #5 by the IBF and #9 by the WBO.

“This was another step toward a world title. My next fight will be in America. Jose Pedraza, I’m coming for you.”

Fighting at Madison Square Garden on the undercard of the Gennadiy Golovkin-Steve Rolls middleweight clash, the 21-year-old Conwell (10-0, 7 KOs), from Cleveland, OH, won a 10-round unanimous decision versus Brooklyn, NY’s Courtney Pennington (12-4-3, 5 KOs), earning the vacant USBA Super Welterweight Title. Scorecards read 97-92 twice, and 96-93. Streamed live on DAZN, Conwell used his advantage in strength to score at will throughout his first 10-round contest.

“I’m very happy with my performance. Pennington was a tough fighter, but we got the victory,” said Conwell. “Now it’s back to the gym to continue learning and growing as a fighter. It was an honor to fight at Madison Square Garden for the first time. Thanks to my promoter Lou DiBella for bringing me here and I hope to return in the near future.”

At the Complexe Sportif Pech Meja, 35-year-old Arzalier, who held the WBF World Strawweight title in 2016 and is also a former European Light Flyweight title-holder, won a clear unanimous decision in the main event of s show staged by Ring Olympique Boxe.

After ten quality rounds of boxing, judges Mohamed Hireche and Jerome Lades both scored the fight 100-90, while judge Jean-Marcel Nartz had it slightly closer at 98-92, all for Arzalier who improved her record to 14-1 (3). Also a former two-time, two-weight WBF World Champion, Da Costa (36) drops to 28-6 (11).

Many felt that Torres Lopez had done enough to deserve the victory, as did judge Fernando Renteria who scored in 97-92 in his favour, but judges Carlos de la Rocha and Roman Cruz had it 95-94 and 96-93 respectively for Sanchez.

Sanchez, still only twenty years of age, takes his professional ledger to 13-0 (7), while Torres Lopez (22) is now 10-4-2 (8). Promoter was Terrazas Boxing Promotions, and a rematch would not be uncalled for to settle the score.

Sylla boxed well, and scored by working behind an accurate jab. Sylla used his almost 6’1″ frame to his advantage to keep Hawthorne at the end of his work, before mixing it up on the inside. Hawthorne, who had defeated four undefeated foes, put up a good effort, but in the end, it was the technically sound Sylla that came home with the victory by scores of 58-56 twice and 59-55.

Sylla of Cincinnati, Ohio who is now trained by world championship trainer Brian McIntyre, continues to stay unblemished at 10-0.

Arum says Joshua could be finished after loss to Ruiz »