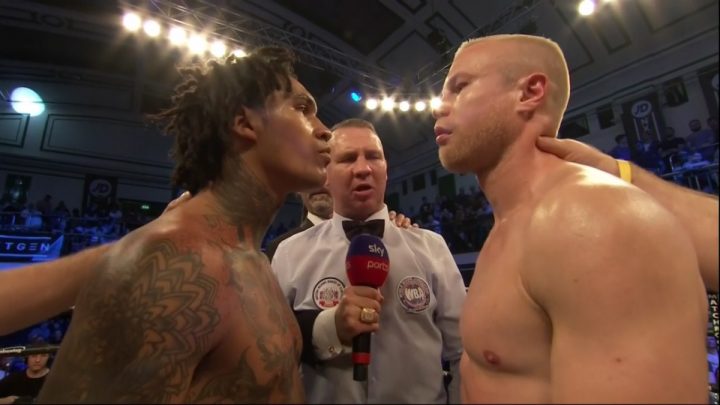 By Trevor McIntyre: Conor Benn (15-0, 10 KOs) successfully defended his WBA Continental welterweight title in stopping 35-year-old Jussi Koivula (24-7-1, 9 KOs) in the second round on Friday night at the York Hall, in Bethnal Green. Benn, 22, knocked Koivula down twice in the second round. After the second knockdown, Benn unloaded with a mini-flurry of shots that led to the referee stepped in and stopped the contest.

#8 WBA Benn looked far from impressive in round one, and in the early part of round two. He was taking heavy shots from Koivula, and looking vulnerable and hurt. Despite’s Benn’s reputation for being a puncher, he was actually the weaker of the two fighters, and he looked less skilled. Koivula, with his 28% KO percentage, was surprisingly the bigger puncher of the two. Five times, Koivula hit Benn with shots that knocked him off balance, and shook him up. Benn never went down, but he was getting knocked off balance repeatedly by shots.

Benn looked pretty desperate because he was getting worked over by the 35-year-old, who came into the fight having lost three out of his last six fights. Jussi continued to nail Benn with straight rights the entire first round. Benn was throwing wild shots, and looking slower, weaker, less accurate version of his famous father Nigel Benn.

In the second round, Benn dropped Jussi with a left to the head that sent him down in delayed reaction. Jussi got back to his feet, but was dropped a second time moments later. Benn then teed off on the badly hurt Jussi until the referee stepped in to stop the fight.

The positive about Benn’s performance

Benn showed decent punching power, and took Jussi’s shots well enough. His aggression was good, and his wildness made him difficult for Jussi to deal with.

It was troubling to see Benn getting hurt repeatedly by a very limited fighter in Jussi. Benn showed very little improvement in his game from his two fights against Cedrick Peynaud. Benn appeared to be the same flawed fighter that was given a gift decision over Peynaud in 2017, and looked equally poor in the rematch. Although Benn fights a lot like his famous dad Nigel, he lacks his hand speed, power and overall talent. Conor is a badly watered down version of his father. Unless something changes in his game in the future, he’s going to get knocked out as soon as he steps up against better fighter.

“He thought he could bully me around, but I was having nothing of it,” Benn said about Jussi.

It looked more like Benn was the one doing the roughhouse tactics when the two were in the clinch. The hitting on the break that Benn pulled on one occasion showed that he wasn’t playing nice.