Arum wants Wilder vs. Fury rematch next without interim fight 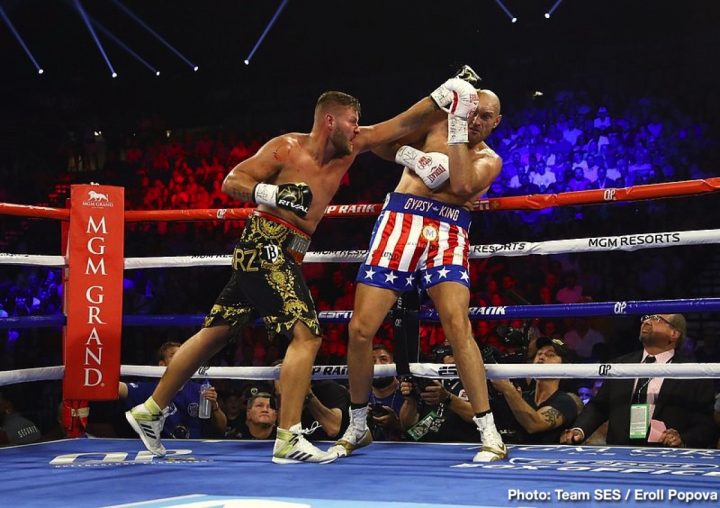 By Barry Holbrook: Tyson Fury’s promoter Bob Arum says he wants to forget about him and Deontay Wilder taking anymore interim fights before meeting in their rematch. Arum says he’s ready to do the rematch next this year without them fighting anyone else.

Arum feels that ESPN did a good enough job of exposing lineal heavyweight champion Fury (28-0-1, 20 KOs) to the American fans with his fight last Saturday night against Tom Schwarz at the MGM Grand Garden Arena in Las Vegas, Nevada.

Fury stopped Schwarz in the second round in dominating performance. That fight was enough to make the rematch with Wilder a huge one, Arum believes. He’d rather not take the chance of putting either fighter in any additional interim fights before putting them back in with one other. Arum is a little late though, because Wilder is already planning on fighting a rematch Luis ‘King’ Kong Ortiz later this year.

“I think we should think about stop fooling around with interim fights where we saw with the Joshua vs. Ruiz fight anything can happen,” said Arum to Helen Yee Sports. “Right now, we’re planning an interim fight for Fury. They have talked about a fight between Wilder and Ortiz. I’m saying until those fights happen and they’re over, I would be very, very nervous. I think that’s a great fight [Wilder vs. Ortiz rematch], because that’s the problem. Ortiz, as old as he is, still has a good punch. I remember their first fight, the fight they had where Wilder had a lot of problems with Ortiz, and Ortiz almost had him out of there. I don’t want to go through that again,” said Arum.

It works in Top Rank’s best interest if they make the Wilder vs. Fury 2 rematch in the next fight rather than waiting until early 2020 to put the fight together. The reason for that is Fury’s next interim fight will likely need to be against a far better opponent than the guy they found for him to shine against last Saturday in little known Tom Schwarz. A far better contender like Kubrat Pulev, for example, wouldn’t come cheap for Top Rank. They would have to pay him a lot of money on top of the huge money that Fury is getting per fight.

Since it wouldn’t be a pay-per-view bout, there likely wouldn’t be any profit from the fight. It would cost a lot of money for Fury and a talented opponent like Pulev to face each other. It’s nice that Top Rank keeps calling Fury the “lineal heavyweight champion,” but that won’t help pay for him and his opponent. In order for Fury to make money, he needs to be on pay-per-view, and there’s no way the boxing public in the U.S will pay to see Fury-Pulev.

The only guys in that division that Fury can fight on PPV is Wilder, Anthony Joshua and possibly Andy Ruiz Jr. For that reason, it’s important that Top Rank goes straight to the Wilder fight for Fury in his next match. It’ll cost too much for Top Rank and ESPN if they have to find an actual good opponent for Fury to fight next. They got Schwarz on the cheap with him only costing $250,000. If Top Rank wants to get Pulev to agree to a fight with Fury, it would likely cost millions. That fight wouldn’t be on PPV, so it would cost a fortune to put together. There would also be the risk of Fury losing. Pulev could beat Fury.

There’s a chance of that happening. Arum is wearing his promoter hat in saying how great Fury looked against Schwarz last Saturday. The truth is, Fury didn’t look good. He looked slow, weak, flabby and hittable. Arum had to have seen what everyone else saw of Fury. The way that Fury looked, he’ll never beat Wilder in the rematch or any of the other good heavyweights in the division. For that reason, it’s not surprising that Arum is interested in speeding up the time table to make the Wilder vs. Fury rematch. Arum can save money that way, minimize risk, and start looking to turn a profit. There’s no profit in matching Fury against expensive contenders on non-PPV, and then seeing him lose. Arum compared Fury to Muhammad Ali last week, but the truth is he’s nothing a young Ali. Fury is more Gerry Cooney than Ali.

“I’ll be up to ESPN and Fox,” said Arum about whether the rematch between Wilder and Fury takes place next or in 2020. “Maybe we can get to that fight right now. I felt like I needed two fights with Tyson Fury in order to have the public take a look at him, and realize what a phenomenal athlete and entertainer he is. But since ESPN did such a magnificent job of helping us promote his last fight with Schwarz, maybe we can go right now into a Wilder fight. That would depend on how the other side [Wilder’s management at Premier Boxing Champions], how PBC and Fox,” said Arum.

Wilder and Fury fought to a 12 round draw last December in Los Angeles, California. Arum says Fury wasn’t at his best for that fight because he had recently lost 145 pounds. Fury had actually lost only 20 pounds from his previous fight against Sefer Seferi earlier last year. It’s true that Fury had lost over 100 pounds from the near 400 lbs. that he’d weighed during his three years out of the ring, but didn’t lose that weight in the last six months before the Wilder fight. He only lost 20 pounds in going from 276 lbs. that he weighed for the Seferi fight to 256 pounds for the Wilder match. Fury weighed 263 pounds for the Schwarz fight, and that extra weight wasn’t muscle. It appears Fury is backsliding to his old ways of overeating.

Arum: Fury wasn’t at his best when he fought Wilder

“I really believe Tyson Fury is the best heavyweight on the world,” Arum said. “I know going into the Deontay Wilder fight, he had lost 145 pounds. When you lose that kind of weight, you’re not at your best. Now that he’s gotten used to the weight, he’s a much, much better fighter. So I believe the fight will end with a knockout victory for Tyson Fury. The odds reflect it’s going to be a close fight,” said Arum.

It does get a little tiresome to hear Fury, his boxing fans and now his co-promoter Arum making excuses for why he wasn’t able to beat Wilder last year. Blaming it on the weight is a convenient excuse for why Fury couldn’t get the job done against the 6’7″ Deontay. It looked more like the case of Fury just not being able to handle Wilder’s punching power. Fury was doing a bang up job through most of the fight in dodging Wilder’s best shots, but Wilder took over the fight in second half.

The fact that Fury had recently lost 145 pounds in the past year, not in the last six months, had nothing to do with why he couldn’t take Wilder’s right hand power. It was more of a case of Wilder’s raw power being too much for Fury to handle. The referee chose not to stop the fight after Fury went down, so he’s lucky that he was a given a chance to continue fighting. 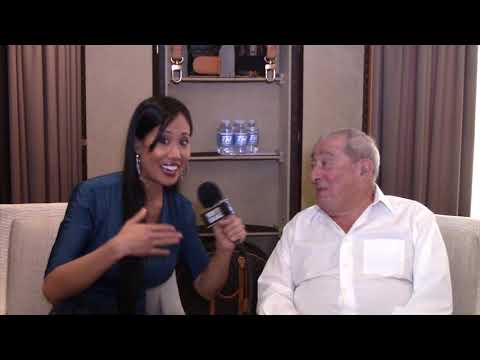