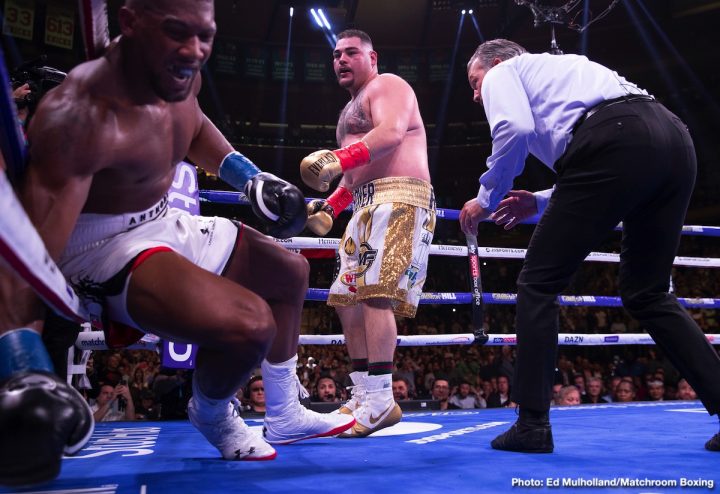 By Daniel Reed: In the boxing business, the act of letting fights marinate can be very risky. For the last 3 years, Wilder vs. Joshua has been THE Heavyweight fight to make in the sport of boxing. It would’ve been America vs. England, two undefeated knockout artists who held belts, one of the biggest fights in the last decade. Tonight’s main event was meant to be a set up for that. Anthony Joshua was originally supposed to be fighting Jarrell Miller on this date in Madison Square Garden, however Miller tested positive for PEDs…lots of them.

On one month’s notice, California’s own Andy Ruiz Jr. stepped up to challenge Joshua in his American debut. Ruiz came in with a respectable 32-1 record (21 knockouts) but was never seen by the mainstream public as being any sort of serious contender for the heavyweight crown. Prior to tonight, the only real big name on Ruiz’s record was Joseph Parker, a fight he lost by Majority Decision. Ruiz had beaten Alexander Dimitrenko (RTD 5) and Kevin Johnson (UD 10) in his last two fights, respectable fighters but not elite or even Top 10 Heavyweights.

When the fight was made, Ruiz was ridiculed in many outlets. Many people poked fun at his appearance, stated how he didn’t have a chance, and moaned about how this was clearly just a “showcase fight” for Joshua’s American debut. Well, as of right now, we have a battered and beaten former Heavyweight Champion flying back to Britain with no belts, and the first ever Mexican American Heavyweight Champion in the history of Boxing. A man that was virtually unknown in mainstream circles a month ago now holds the IBF, IBO, WBA, and WBO World Heavyweight Championship belts.

This is why letting fights marinate is a risky business for the powers-that-be in the world of boxing. For Joshua, the Wilder fight has all but gone up in smoke. But, this is also what keeps the fans coming back for more. This is why we love the sport. This is the theater of the unexpected. Joshua was a -2500-favorite tonight, one of the biggest upsets boxing has seen in a very long time. Everyone seemed to be disrespecting Ruiz before tonight; media, fans, Joshua’s team, and certainly Anthony Joshua. It was apparent in the fight that Joshua had little respect for Ruiz’s inside-fighting skills and deceptively fast hands.

It’s not exactly clear where Anthony Joshua goes from here, perhaps a rematch is likely. Either way, history has been made, boxing was given a boost, excitement was generated, and Andy Ruiz has suddenly been thrust into greatness. It was a memorable night for all involved and is a reminder that you can never truly count anyone out when it comes to the world of championship heavyweight boxing. It may be a cliché, but it’s true; when it comes to boxing, a fight ain’t over til’ it’s over.