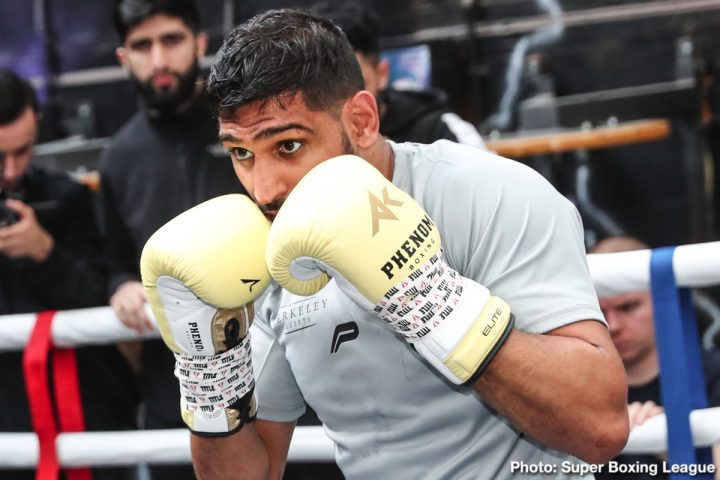 Amir Khan will now fight Two-Time World Champion Billy Dib on Friday 12th July in Jeddah, Saudi Arabia, for the WBC Pearl Welterweight Championship on the line after his original opponent Neeraj Goyat was involved in a car accident.

Two-Time World Champion Khan was due to face Goyat at the King Abdullah Sports City Stadium in the first ever Pakistan-India showdown in a boxing ring.

Khan will still headline the groundbreaking boxing extravaganza in the Middle East that also features Hughie Fury, Prince Patel and Dave Penasola all in championship title action, exclusively live in the UK on Channel 5 and 5Spike.

It’s clear that Goyat’s will not recover in time and be fully fit to fight Khan on the scheduled date and promoter Bill Dosanjh of The Super Boxing League has moved quickly to secure Khan a new opponent in the World class former two-time World champion Dibb.

Khan said, “First of all my heart goes out to Neeraj and I pray for him to make a full recovery and is fit and healthy again to resume his boxing career,” said Khan.

“We’ve had to make the decision to find a replacement and we’ve done extremely well in securing Dib to now be in the opposite corner.”

“This fight is a landmark moment for boxing in Saudi Arabia and myself, Bill, the Saudi GSA and the government have worked tirelessly to put this event together. We wanted to keep the event on during the important Saudi Season and ensure the fans in Saudi get to watch this great event,”

“I’ve been a professional for nearly 14 years now and I’ve seen and dealt with near enough everything in that time so adjusting to a new opponent and challenge is part and parcel of the boxing business so I’ve just got to sit down with my team and work on the new plan,”

“I’m really excited the fight is still on, I would have been absolutely distraught if my dream of fighting in Saudi had to be put on hold. Dib is a respected and experienced two-time World Champion so I’m looking forward to pitting my skill against him.”

Amir Khan vs. Billy Dib – where to watch?

Khan v Dib is exclusively live on Channel 5 and the undercard on 5Spike on Friday 12th July.