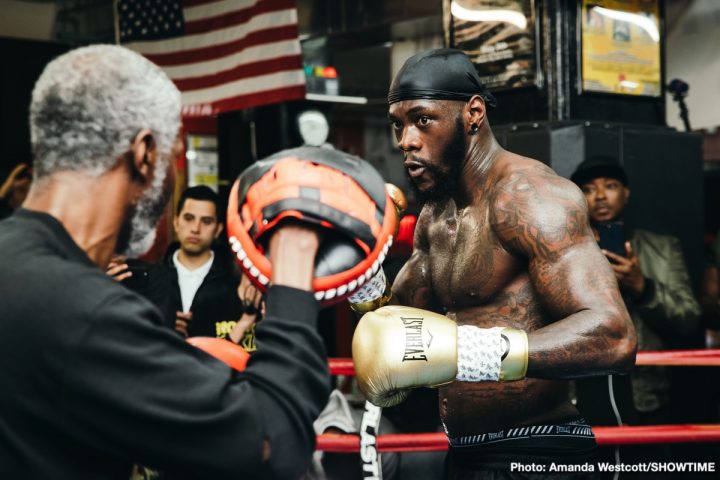 By Allan Fox: WBC president Mauricio Sulaiman says heavyweight champion Deontay Wilder be facing a hearing to discuss his recent comments about him still trying to get a “body” on his resume going into his fight this Saturday night against Dominic Breazeale. Sulaiman is highly upset about the comments from Wilder, saying they’re against the WBC’s code of ethics.

Breazeale (20-1, 18 KOs) has taken the comments from Wilder as a sign that he’s “scared”, and doesn’t know what else to say to boost up his self-confidence going into their fight this Saturday night on Premier Boxing Champions on Showtime at the Barclays Center in Brooklyn, New York.

I have seen Deontay Wilder comments which are regrettable and completely against the spirit of our sport. I have known Wilder for a long time and he is not the person he portrays in such comments. His metaphors are against the WBC code of ethics and will be addressed in a hearing

It’s unknown what type of action the WBC could take to discipline Wilder for his comments. They could perhaps fine him. It’s unlikely the World Boxing Council would strip him of his title, because he’s a popular champion. Giving Wilder a suspension is another option. It’s unlikely the sanctioning body would suspend Wilder. A suspension would get in the way of a possible big money rematch between Wilder and lineal heavyweight champion Tyson Fury. There’s a chance that Wilder and Fury could face each other in a rematch in December.

“His life is on the line for this fight. And I do mean his life. I’m still trying to get a body on my record. This is the only sport where you can kill a man and get paid for it at the same time. It’s legal. Why not use my right to do so?” Wilder said via Michael Benson.

The options for the WBC’s punishment of Wilder are as follows:

– strip him of his WBC title

– order Wilder to attend sensitivity classes of some sort

– scold him via social media

If the WBC strips Wilder of his heavyweight title, they wouldn’t be hurting him too much. Wilder is already popular, and he could still make just as much money fighting Fury and IBF/WBA/WBO champion Anthony Joshua as he would if he were the WBC champion. The title no longer matters for Wilder. He’s seen as one of the best fighters in the heavyweight division by boxing fans whether he has a title in his possession or not. If the WBC strips Wilder, then they won’t be able to get some of the sanctioning fees for when he faces Joshua or Fury again. It works against the WBC if they strip Wilder of his title.

The WBC scolding Wilder for his comments on social media would be a harmless way for them to let him know that what he’s saying isn’t what they believe in. If Wilder changes the way he talks about his opponents in the future after being scolded, then the WBC’s public scolding will have worked. If not, then the sanctioning body will need to come up with another idea.