Spence to Thurman: “Don’t disappear IF you win” against Pacquiao 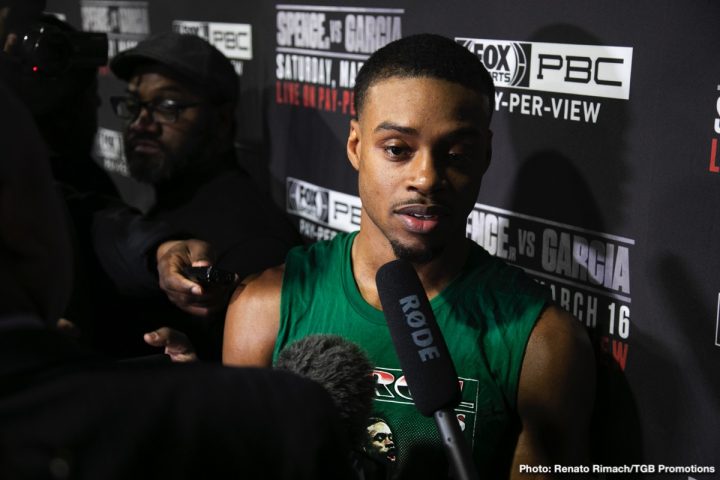 By Dan Ambrose: Errol Spence Jr. sent Keith Thurman a strong message on social media in telling him not to vanish if he beats Manny Pacquiao on July 20 in their fight on Fox Sports pay-per-view. Thurman has been talking about how the 40-year-old Pacquiao (61-7-2, 39 KOs) is going to “disappear” completely from the sport of boxing after he beats him on July 20th.

Thurman says Pacquiao will be beaten so convincingly that he’ll never lace up a pair of gloves again.

“It’s a new era of boxing. Floyd is gone, Pacquiao is here — but come July 20th he will disappear!” Thurman said.

Spence said this about Thurman in response to his remark about Pacquiao disappearing:

Thurman disappeared in the past

Two years ago, Thurman pulled a disappearing act following his narrow 12 round split decision win over Danny Garcia on March 4, 2017. Thurman took two years off from boxing because of an elbow injury. When Thurman tried to come back too soon, he injured a hand. That led to more time off. It wasn’t until January 2019 that Thurman came back against Josesito Lopez, and beat him by a close 12 round majority decision.

What’s interesting is Thurman says that’ll be him, Danny Garcia, Shawn Porter and Spence as the guys that will rule the 147-pound weight division. Thurman says that, but he isn’t saying when he’ll be fighting Spence. Thurman says it’s too soon for the fight with Spence to be made. He thinks Spence still needs to become more popular before he’ll agree to fight him.

Pacquiao could be trouble for Thurman

The way that Thurman fought in his comeback fight against Josesito Lopez (36-8, 19 KOs) on January 26 in Brooklyn, New York, he could lose to Manny. Thurman’s footwork was sloppy, and he was throwing wild shots that were leaving him open to being countered by the 34-year-old Lopez. Worst of all, Thurman looked tired from the fourth round. He was running from Lopez, and that looked bad. Thurman would throw a punch and run. For the boxing fans that have become accustomed to watching fighters like Gennady Golovkin, it was hard on the eyes to see Thurman running after throwing single punches. It was the same thing Thurman did in the Danny Garcia fight.

Thurman needs to beat Pacquiao, and then look to fight Spence for him to show the fans that he’s more than just talk.