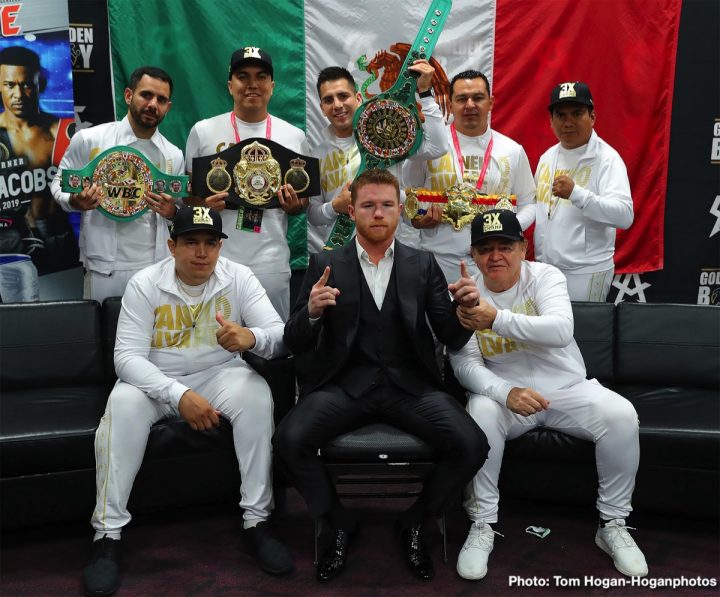 By Dan Ambrose: Trainer Eddy Reynoso insists that Saul Canelo Alvarez will one day be the #1 Mexican fighter ever when he retires from the sport. Right now, it’s still too early to consider Canelo anything more than just a good fighter.

Alvarez didn’t look good in his last fight against IBF middleweight champion Daniel Jacobs. Likewise, Canelo’s two matches against Gennady Golovkin were highly controversial, and not the type fights that one would consider for an all-time #1 Mexican boxing great. When you compare how Canelo fought against GGG to how Mexican legend Salvador Sanchez dealt with Wilfredo Gomez, Ruben Castillo and Azumah Nelson, there’s no comparison. Sanchez was an incredible fighter.

“What if Canelo is among the top 10 fighters that Mexico has given? The day you retire will be the best!” Eddy Reynoso said on his social media site.

Canelo, 28, is considered the face of boxing by his promoters at Golden Boy Promotions. But whether Canelo will be the #1 Mexican boxer of all time when he finishes his career is uncertain. Past greats like Julio Cesar Chavez and Salvador Sanchez are hard to ignore.

These are the Mexican fighters that Canelo will be measured against:

Boxing great Salvador Sanchez’s career was cut short after he was killed an automobile accident in August 1982 shortly after his win over Azumah Nelson. Sanchez (44-1-1, 32 KOs) was only 23-years-old, and he’d already beaten Nelson, Wilfredo Gomez, Rocky Garcia, Juan Laporte, Danny ‘Little Red’ Lopez, Ruben Castillo, and Pat Ford. Sanchez was just starting out, and yet he’d already beaten some great fighters. Sanchez completely outclassed Wilfredo Gomez, who had knocking everyone out at the time those two fought each other in August 1981.

It’s hard to say that Canelo is even the best Golden Boy fighter, let alone the best fighter in the history of Mexican boxing. Oscar De La Hoya captured six division world titles during his pro career, and he arguably wasn’t as dedicated towards the end of his career as Canelo is looking now. Oscar (39-6, 30 KOs) made it look so effortless with the way he was able to move through the different weight classes, winning world titles every where he went. De La Hoya had a care free approach to his career. One never got the sense that he was super ambitious. He just wanted to fight the best guys, and the titles came to him. Canelo is trying to win division titles for the sake of it. De La Hoya wasn’t that way. He moved up in weight to get the bigger fights. De La Hoya went after Bernard Hopkins at middleweight, and Felix Sturm. If De La Hoya had wanted to, he likely could have wound up as eight division world champion.

To be considered the #1 Mexican boxer ever, Canelo will need to beat the top dogs at 168 and. It’s unlikely that Canelo will match De La Hoya in winning six division world titles. For Canelo to do that, he would need to win a world title at light heavyweight and then cruiserweight. While it’s possible Canelo might be able to capture a title at 175 if he faces someone like WBO light heavyweight champion Sergey Kovalev, who is getting old at 35, and not the fighter he once was seven years ago. Canelo, 5’8″, would be likely be too small to move up to cruiserweight to take on one of the champions in that weight class. If Canelo faces one of the light heavyweights like Dmitry Bivol, Artur Beterbiev or Oleksandr Gvozdyk, it probably wouldn’t go well for him at all. Beterbiev looked devastating last Saturday night in beating Radivoje Kalajdric by a fifth round knockout on ESPN.

Beterbiev can fight on the inside like no one else in the 175 lb. weight class. Canelo vs. Beterbiev would be a lot funner to watch than Canelo-Kovalev. Beterbiev would stand in the trenches and battle Canelo on the inside. Kovalev will stay at range and box Canelo, and it’ll likely be dull to watch similar to how Kovalev beat Bernard Hopkins in 2014. That was a boring fight. Kovalev took no chances, and stayed on the outside for 12 rounds. Beterbiev would challenge Canelo in close, and it would be devastating to watch. It’s doubtful that Canelo would agree to fight Beterbiev though, because he’s unbeaten at 14-0 with 14 knockouts, and looking hard to beat for anyone in the light heavyweight division. It would be interesting to see if Canelo’s faster hands and counter punching would be a match for Beterbiev on the inside. The way that Beterbiev took care of Kalajdric last weekend would likely be how he would deal with Canelo.