Michael Hunter vs Fabio Maldonado on May 25, live on DAZN 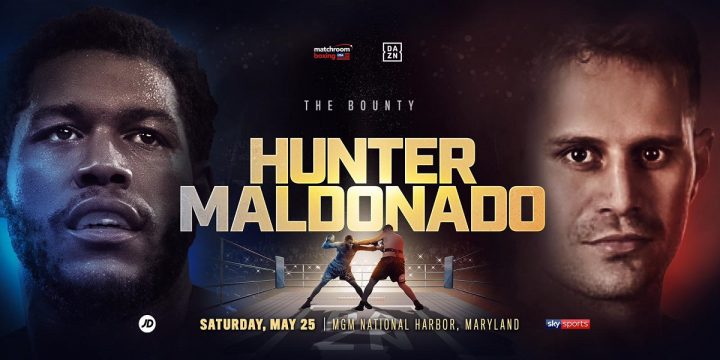 Michael Hunter will step up his pursuit of major fights in the Heavyweight division as he faces Fabio Maldonado at the MGM National Harbor in Oxon Hill, Maryland on Saturday May 25, live on DAZN in the US and on Sky Sports in the UK.

Hunter (16-1 11 KOs) has notched four wins at Heavyweight since moving up from Cruiserweight, with his last three coming inside the distance and impressively in his last two outings, stopping the touted Martin Bakole in the tenth and final round of their clash in London in October and then travelling to Monte Carlo to stop former World title challenger Alexander Ustinov in the ninth round of their battle a month later.

‘The Bounty’ is already in the reckoning for major fights amongst the big boys, having found himself in the conversation to face Anthony Joshua on the Heavyweight rulers American debut at Madison Square Garden in New York on June 1.

That honor has landed to Mexican Andy Ruiz Jr but with the Heavyweight scene as vibrant as ever and ready to come into focus over the next couple of months with champions and top contenders all in action, Hunter’s clash with the dangerous Brazilian banger Maldonado (26-2 25 KOs) is a pivotal one for him to remain in the reckoning for massive fights later in the year.

“I’m here to stay at Heavyweight whatever is next,” said Hunter. “There’s a lot of avenues for me, a number of big fights out there and I will take anyone on. I’m always in the gym and I’m a real, traditional fighter that will take anyone. I have a lot more doors open for me but the first task is to win and win well against Maldonado, who is a dangerous and experienced guy.

“Here I am now as a Heavyweight, my dream was always to be a Heavyweight, nothing else. I didn’t really think about Cruiserweight until I found out about the different divisions were, because as a kid you know the biggest, baddest man on the planet is the Heavyweight World champion and that’s what I want to be.”

Hunter’s clash with Maldonado is part of a huge night of action in Maryland as one of the world’s hottest talents, Devin Haney, is closing in on a first World title shot, and the 20 year old Lightweight sensation faces Antonio Moran on his DAZN debut.

Fans looking to get a refund following the injury to original headliner Oleksandr Usyk should contact their point of purchase.

Boxing » Press News » Michael Hunter vs Fabio Maldonado on May 25, live on DAZN