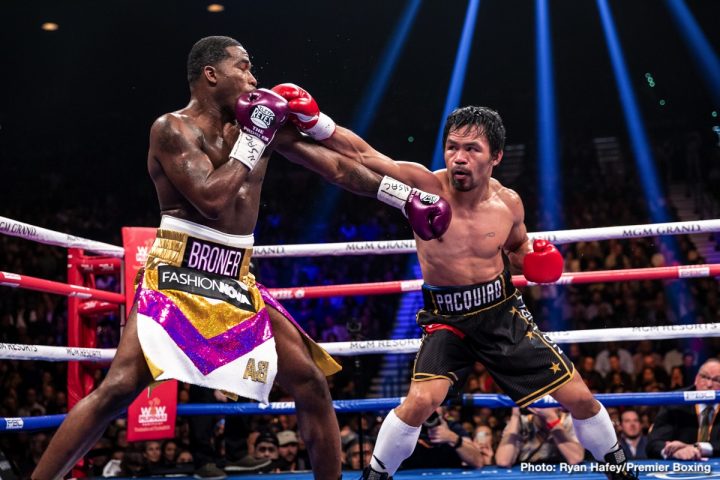 By Sean Jones: Manny Pacquiao chose not to fight IBF welterweight champion Errol Spence Jr. despite agreeing to the face him, but instead he’s got an excellent opponent in WBA Super World welterweight champion Keith ‘One Time’ Thurman that he’ll be facing on July 20 on Premier Boxing Champions on Fox Sports pay-per-view at a still to be determined venue in Las Vega, Nevada. There’s still no word on the undercard for the fight.

The news of the WBA ‘regular’ welterweight Pacquiao (61-7-2, 39 KOs) vs. Thurman (29-0, 22 KOs) fight was announced last Saturday night during the Jarrett Hurd vs. Julian Williams card. Also, the super middleweight clash between IBF 168-pound champion Caleb Plant (18-0, 10 KOs) vs. fringe contender Mike Lee (21-0, 11 KOs) was also announced for the same night on July 20. There’s not quite as much buzz for the Plant-Lee fight as the Pacquiao-Thurman fight for obvious reasons. Lee has never fought any major players during his career, and it’s unclear why he’s getting a world title shot other than him having an unbeaten record. Plant vs. Lee figures to be a mismatch unfortunately. It would have been nicer to see Plant face one of the talented super middleweights like David Benavidez, Chris Eubank Jr., Juergen Braehmer, Jose Uzcategui or even David Lemieux.

Thurman, 30, and the 40-year-old Pacquiao aren’t the fighters they once were. Thurman recently came back after two years out of the ring and struggled to defeat fringe contender Josesito Lopez (36-8, 19 KOs) by a 12 round majority decision on January 26 at the Barclays Center in Brooklyn, New York. Although Thurman dropped Lopez in round two, he faded in the second half of the fight and was on the verge of being knocked out by the 34-year-old ‘Riverside Rocky.’ If there was a little more time left in the seventh round, Thurman would have likely been knocked out. All in all, it wasn’t an impressive performance by Thurman, who performed nothing like the guy that had defeated Danny Garcia and Shawn Porter in the past. The two years out of the ring from 2017 to 2019 clearly didn’t help Thurman’s game any. At this point in Thurman and former eight division world champion Pacquiao’s careers, neither of them are the best in the 147-pound division or even the second best. You can argue that Pacquiao and Thurman are below these welterweights in terms of ability at this point in their respective careers:

Before taking his two-year layoff from boxing, Thurman edged Danny Garcia and Porter in close 12 round fights. Those fights were a long time ago, and Thurman doesn’t appear to be the same fighter that defeated those two in razor thin fights. While some fighters can take two years off and come and look almost as good as they once were, Thurman isn’t one of them. He looked nowhere near the fighter that he was in the past in his last fight against Josesito Lopez last January. If this is as good as it gets for the 30-year-old Thurman, he might not beat Pacquiao on July 20, and he obviously can forget about defeating the likes of Errol Spence Jr. or Terence Crawford, if he ever agrees fight either of them. Spence has been trying to get a fight against Thurman since 2016 with no luck.

Pacquiao is coming off of a 12 round unanimous decision victory over former four division world champion Adrien ‘The Problem’ Broner on January 19 at the MGM Grand in Las Vegas, Nevada. Pacquiao won that fight over the shot-looking Broner by the scores 117-109, 115-111 and 113-113. Pacquiao took advantage of the fact that Broner can no longer pull the trigger on his punches at this point in his career. Age and the wear and tear of too many hard fights has taken something out of Broner’s game.

Pacquiao vs. Thurman: Is this battle for welterweight supremacy?

This fight is being talked about as a ”battle for welterweight supremacy,” but is it? Pacquiao-Thurman is certainly an interesting fight on paper, but the part about it being a fight for “welterweight supremacy” makes little sense. Pacquiao is no longer performing at the level that he once was at, and he arguably dodged the Spence fight, which he had agreed to take when he accepted the challenge from Errol on March 16. Pacquiao went into the ring moments after Spence’s one-sided 12 round unanimous decision victory over Mikey Garcia at AT&T Stadium in Arlington, Texas, and he agreed to fight Spence when he was asked by him whether he would be willing to face him. It looked bad that Pacquiao backed out of the Spence fight to take the arguably easier contest against Thurman. It’s not that Thurman isn’t a good fighter. He’s still undefeated, and he has an excellent resume of victories over Luis Collazo, Porter, Danny Garcia, Josesito Lopez, Robert Guerrero, Leonard Bundu, Julio Diaz, Diego Chaves, Jesus Soto Karass and Carlos Quintana. It’s just that Thurman doesn’t look like the fighter he was, and when he was at his best, he didn’t look as talented as Spence and Crawford.

This fight could be a step too far for the soon to be 41-year-old Pacquiao in him choosing to face a better fighter than himself in Thurman. Pacquiao has been looking an older guy in his recent fights against Broner, Jeff Horn and Jessie Vargas. You can’t include Pacquiao’s fight against Lucas Matthysse last year in July as an example of how he’s fighting now, because he was facing a guy that was clearly over-the-hill, and he looked like the terminator in that match. Pacquiao was really muscular for that fight, which took place at the Axiata Arena, in Kuala Lumpur, Malaysia. Manny wasn’t that cut up or seemingly as powerful for his last match against Broner nor was he that way in his loss to Horn in 2017. If Pacquiao can fight at that level against Thurman, he has a shot at to win, but he probably can’t. Pacquiao lacks the size to beat a fighter like Thurman. When Thurman is rehydrated, he’s huge, fast and powerful. He moves well, and that’s a style that Pacquiao has problems with. There are guys that Thurman would have tremendous issues trying to beat like Crawford, Spence, Porter, Garcia and Ugas, but the short 5’6 1/2″ is made to order for him more or less.

If Pacquiao can use a lot of angles, and move his feet quickly to get in position to throw shots like he did at times in his win over Matthysse, he could score a knockout of Thurman. As we’ve seen in the past, Thurman’s punch resistance isn’t that great.

Pacquiao vs. Thurman is a good fight. Whether or not one can call it a PPV worthy match is unclear. Thurman hasn’t proven himself since he’s been back from his two-year layoff, and it’s hard for boxing fan to wrap their teeth around the fact that they’ll have to pay to see ‘One Time’ fight Pacquiao, who hasn’t looked like the guy that he used to be since 2012. It’s been a long, slow fall from where Pacquiao was many years ago. If Thurman didn’t look so awful in his last fight against Josesito Lopez, it wouldn’t be as much of a big deal that he’s fighting on FOX Sports PPV against Manny. But he looked dreadful against Lopez, and he should be fighting him again rather than moving on and counting as a victory. There are situations where a fighter can move forward with their career after beating an opponent, but Thurman’s win over Lopez wasn’t decisive enough for him to march passed that one, as if he achieved anything. Thurman is coming into the Pacquiao in bad shape in terms of him performing poorly in his last match against Lopez, and having fought only once in the last two years.