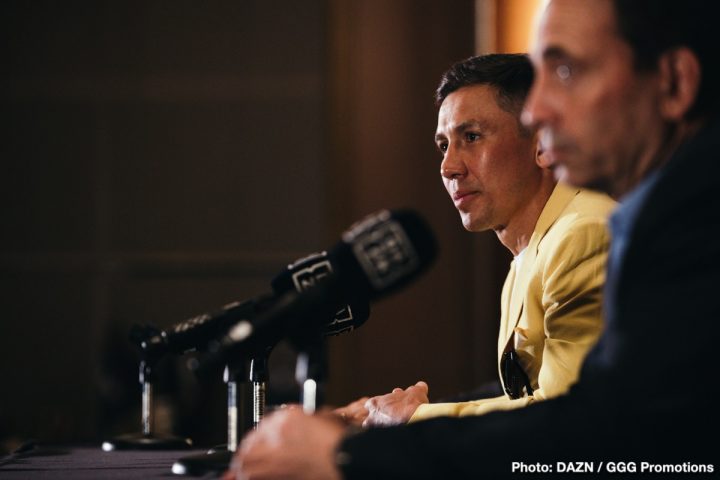 By Barry Holbrook: Gennady Golovkin’s promoter Tom Loeffler says DAZN wants the trilogy fight between GGG and IBF/WBA/WBC middleweight champion Saul Canelo Alvarez to take place. Loeffler says the huge contracts that DAZN gave the two stars Canelo and Triple G wasn’t so that they could fight guys like Rocky Fielding and Steve Rolls, who aren’t big names. They want GGG and Canelo to fight each other already. Loeffler is hoping to arrange the Canelo vs. Golovkin 3 fight for September, but he’ll need Golden Boy Promotions to cooperate with him to make that a reality.

Canelo (52-1-2, 35 KOs) and his promoters at Golden Boy Promotions are talking about wanting to a different direction from GGG by facing the likes of Callum Smith, Demetrius Andrade or Sergey Kovalev in September. Although Golovkin’s name was mentioned by Golden Boy Promotions CEO Oscar De La Hoya last Saturday night as a potential option for Canelo’s next fight in September on DAZN, he wouldn’t commit to making the fight. De La Hoya said that he’s going to sit down with Golden Boy president Eric Gomez, Robert Diaz and the other members of the team and make a decision about who Canelo will fight next.

”That’s a fight that we’ve been trying to get for GGG,” Loeffler said to IFL TV about a fight between Golovkin and Carl Froch. ”So now with these new economics in boxing, maybe that’s enough for Carl. The caveat Eddie [Hearn] said he just straightened his nose, and he didn’t want to have it crooked again. Look, GGG and Carl Froch at Wembley Stadium, that would be huge. Then he [Froch] coud say 90,000 instead of 80,000 fans, which would be good,” Loeffler said.

Loeffler mentions Froch’s surgically straightened nose. The big question is would Froch want to risk having his nose knocked askew or flattened by one of GGG’s hard shots? To come out of retirement, Froch would need to do a lot of hard sparring to get ready for Golovkin, and there would be a high chance of his nose being reshaped by the punches that he receives during his training. The positive for Froch is the huge money he would make fighting Golovkin would more than help pay for a new nose job. If Froch’s vanity more important than him making millions in a mega-fight against Golovkin?

Froch has recently started talking about wanting to fight a trilogy match against now retired George Groves, who he knocked out twice in the past in 2013 and 2014. Groves (28-4, 20 KOs) was stopped in the seventh round in his last fight against unbeaten Callum Smith in the World Boxing Super Series super middleweight tournament on September 28 in Jeddah, Saudi Arabia. Groves has had left shoulder problems since his fight against Chris Eubank Jr. last year in February 2018 in the quarterfinal of the WBSS tourney.

It’s unclear whether Groves’ shoulder would allow him to fight at 100%. Froch hasn’t fought in five years since his 8th round knockout win over Groves on May 31, 2014 at Wembley Stadium. It’s unlikely that Froch is anywhere near the level he was at when he last fought Groves five years ago. It’s unlikely that Groves will want to come back to fight Froch in what would be for all intents and purposes a circus level fight.

Froch hasn’t said anything about wanting to come out of retirement to fight GGG. You would have to assume that Froch would have ZERO interest in fighting a still very lethal 37-year-old GGG, even though the two of them are only four years apart in terms of their ages. Froch’s brawling of fighting would be made to order for Golovkin. It likely wouldn’t end well for Froch, who has never been knocked out before during his career. If Froch were to come out of retirement to fight Triple G, there would be an excellent chance that he would be stopped for the first time in his pro career.

”There’s a lot of pressure for GGG and [Johnathon] Banks to look good on June 8,” Loeffler said. ”Steve Rolls is undefeated, he’s hungry, and he can upset the applecart. Gennady’s plan is to do a rematch with Canelo. He won’t get that unless he’s successful on June 8th. Gennady has become one of the most marketable fighters. There’s AJ [Anthony Joshua], Canelo and Gennady. They stand out among the other fighters in the world in terms of not only boxing top 10 pound-for-pound list, but also marketable fighters,” Loeffler said.

With Golovkin-Rolls be a mismatch between an unknown 35-year-old fighter with a weak resume, who has never fought a world class level opponent before, it puts more pressure on GGG to not only win but do it an impressive fashion. That’s why it a rotten idea for Golovkin and Loeffler to pick out Rolls as an opponent for his June 8th fight. Surely there had to have been someone better than Rolls for Golovkin to fight on his debut on DAZN for June 8 instead of Rolls. The streaming company might be thinking casual boxing will be impressed with Rolls being an undefeated fighter. When the commentators briefly point out that Rolls is unbeaten at 19-0, the casual fans will latch on to that and think Golovkin has got an excellent opponent for his June 8th fight. That’s not how it goes though. The casual fans will hear about the GGG vs. Rolls fight the week of the match, and make up their mind whether they want to watch it or not based on promotion and the hype. Given the 35-year-old Rolls’ complete lack of experience against quality opposition during his 10-year pro career, it’s safe to say there will be little hype for the Golovkin-Rolls fight.

”There’s a big emphasis that if GGG wins [against Steve Rolls], that’s the direction is looking to go in,” Loeffler said about DAZN wanting Canelo vs. Golovkin III in September. ”They didn’t sign this big deal for fights against Rocky Fielding or Steve Rolls. No offense to either of those fighters. They’re [DAZN] looking at a trilogy with GGG and Canelo. They’re looking at a rematch with Danny Jacobs and GGG. If Gennady doesn’t win against Steve Rolls…That’s why the pressure is on here. He has to look good in order to get those type of fights,” Loeffler said.

DAZN obviously aren’t paying Golovkin and Canelo Alvarez massive money to see them fight guys that won’t bring in the subscribers. DAZN has been patient thus far in letting Canelo fighting a no name in Rocky Fielding, and Golovkin taking on little known Steve Rolls, but these fighters are going to need to make sure they take the high profile fights if they want to bring in the subscribers to DAZN. Sergey Kovalev vs. Canelo would be an excellent fight on DAZN. However, it would be a shared network deal, as Kovalev has a co-promotional deal with Top Rank Boxing, and fights on ESPN. The amount of subscribers might not be as big as one would think for a fight between Canelo and Kovalev, given that a lot of fans will be watching the contest on ESPN. Canelo vs. Callum Smith would play out huge in the UK, but not in the U.S. Smith isn’t well known in the States.

Johnathon Banks: ‘Wladimir Klitschko is NOT coming back’ »