Joshua: ‘Tyson Fury and Deontay Wilder have been fighting cab drivers and binmen’ 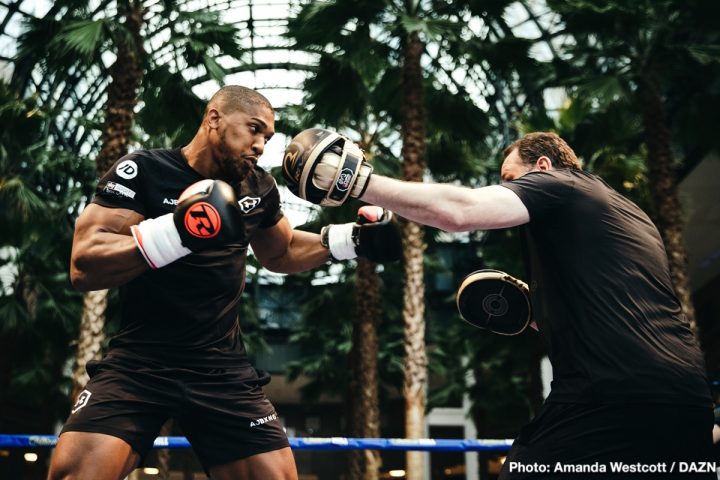 By Tim Royner: A frustrating sounding Anthony Joshua is lashing out at Deontay Wilder and Tyson Fury for their reluctance to accept the offers made to them to take a fight with him. An upset looking IBF/WBA/WBO heavyweight Joshua says Wilder and Fury have both been fighting trash men and cab drivers during their careers as professionals, and he feels he’s better opposition at a faster pace since turning in 2013.

What Joshua isn’t saying is the offers that his promoter Eddie Hearn has been making to Wilder and Fury likely isn’t a 50-50 offer, which is what both want. Joshua has wanted the lion’s share of the money in fights with those two fighters, and for that reasons, he’s come close to facing each other them.

“He’s a credible fighter, and that’s why we’ve chased this fight,” Joshua said to ESPN’s First Take about wanting a fight against Tyson Fury. “I put in a massive offer to fight Tyson Fury in London on April 13th. The other name he has on his record that is better of equal to mine is Deontay Wilder. I fought Wladimir [Klitschko]. He fought Wladimir. I fought other good fighters as well, Joseph Parker and [Alexander] Povetkin. I think Tyson Fury had Wladimir Klitschko and Wilder. That’s the end of his 10-year career. I understand he’s frustrated as well. He wants to promote himself on the world stage, and I do too. We put in an offer for Tyson Fury, and hopefully I’ll meet him very, very soon in the boxing ring. Talking about it is irrelevant. Let’s do it in the boxing ring,” Joshua said.

Fury wants the fight with Joshua, but the fight likely won’t ever get made due to the purse offers. Fury wants a 50-50 deal to fight Joshua, and he might not ever get that from him. To his credit, Wilder was willing to give Fury the 50-50 split that he wanted to sign for the fight.

“I’ve tried to fight Joshua five times, and all of a sudden he comes to America where he said he would never come,” Wilder said to ESPN’s First Take. “‘Let’s stay in our country [the UK] here. You deserve it here, yeah,’ Wilder said in imitating Joshua. “‘We don’t need to go nowhere. We do the job here, yeah. The fans deserve it.’ But all of a sudden he’s coming to my country [U.S], and he’s not fighting a champion. He’s fighting lower opposition [fringe contender Andy Ruiz Jr.],” Wilder said in criticizing Joshua for coming to the U.S to fight a bottom dweller level contender in the chubby Ruiz Jr., who was already beaten by one of Joshua’s past victims Joseph Parker in 2016.

Wilder (41-0-1, 40 KOs) views Joshua’s efforts at creating pressure on him by fighting in the U.S as a weak move on his part. Joshua’s decision to come to the U.S to try and force public pressure by boxing fans on Wilder to face him was a good move. What’s clearly a wrong move on Joshua’s part is to face an overweight looking heavyweight in Andy Ruiz Jr. (32-1, 21 KOs), who he’ll be fighting this Saturday night at Madison Square Garden in New York. Before Ruiz Jr. was picked out, Joshua was scheduled to face another flabby American heavyweight in Jarrell ‘Big Baby’ Miller. When the fight fell through, Ruiz Jr. was picked out by Joshua’s promoter Eddie Hearn to fight him on June 1 at MSG. Wilder sees Joshua as picking soft opposition to fight in the U.S in showcase fights instead of tough fighters like Luis Ortiz, who Hearn failed to give a big enough offer to in order to make the fight.

“Why sit here and talk about it? Let’s just meet in the ring and get it on,” Joshua said about Wilder. “Talk is cheap now. I’ve done enough of the talking business. I’m a fighter, and that’s how I want to handle my business. Deontay Wilder, when you’re ready, come see me at the [negotiating] table. Don’t come through your promoter no more. Come sit with me man-to-man across the table, and let’s get the fight sorted. Then there’s no, ‘He said, she said.’ It’s me and him one on one, and hopefully me and him can negotiate the fight ourselves,” said Joshua.

Joshua’s attempt to goad Wilder into negotiating with him without a promoter looks to be a grandstanding move by him, and one doomed for failure. It’s highly likely that Joshua isn’t serious about wanting to negotiate with Wilder without his longtime promoter Eddie Hearn of Matchroom Boxing by his side to do the talking. What Joshua appears to be attempting to do is to shame Wilder into negotiating with him. What would be a better negotiating tactic to pressure Wilder into signing would be for Joshua to tell the public what percentage split he’s willing to give Wilder. If Joshua is only willing to give Wilder a 60-40 split, then he should tell the boxing public that’s what he’s offering him. The public expects Wilder to get a 50-50 deal for the Joshua fight. If Joshua isn’t willing to give Wilder that, then there’s no point in him playing games by talking about meeting with him one on one to negotiate the fight.

“I think people are realizing that Tyson Fury and Wilder have been professionals for 11 years, and their whole careers they’ve been fighting cab drivers and binmen [trash men],” Joshua said. “Now they’re seeing another kid that has come up four years after them [Joshua refereeing to himself], and doing it at a quicker pace. We need to step our game up. We came to a situation where they blacklisted me. They didn’t want to fight me,” Joshua said.

Fury has fought Wladimir Klitschko, Dereck Chisora and Wilder. For his part, Wilder has fought Fury, Dominic Breazeale and Luis Ortiz. Joshua’s best fights have been against Klitschko, Joseph Parker, Carlos Takam and Breazeale. There’s not much difference between the three. It’s hard for Joshua to be taken seriously when he criticizes Fury and Wilder’s opposition, but he’s in the same boat. Parker, Wladimir and Povetkin were nothing special by the time Joshua fought them. Wladimir and Povetkin were both 40-years-old when Joshua fought them. They weren’t exactly in their prime. In the Joshua-Parker fight, the referee that was assigned to the contest, prevented inside fighting, which gave Joshua a HUGE advantage. It was an unreal advantage that Joshua had due to the referee that worked the Parker fight. It was embarrassing how bad the referee was. It was as if he was working his first fight, and he didn’t understand the rules of boxing about how inside fighting is allowed.

“With [Luis] Ortiz, we offered Ortiz the fight. How can someone say I didn’t want to fight these guys when I’ve made them proper solid contractual [offers],” Joshua said about the failed negotiations for the Luis Ortiz fight. “No, man. Everyone is entitled to their opinions,” Joshua said when told that the perception by boxing fans is he doesn’t want to fight Wilder and Fury. “I know what’s real. Opinion is opinion. I know what’s fact. We’ve given them offers. If they want to fight, the rings there, the contracts there, and I’m here, ready to defend my titles. What more can I say? Opinions are opinions. I know the reality of the situation. As a fighter, that’s what I do for a living. I live off these challenges. I’m not afraid of any man. Whoever is serious and ready like Andy Ruiz Jr. He put his name on the contract, and the fight was made. No nonsense. It will be good for me and Deontay Wilder to sit down and get the fight negotiated after this fight [with Ruiz Jr.]. I’ve spoken to my promoter, and told him, ‘You know what I want next. How are we going to make this happen?’ I’ve just come to the decision where it’s important for me and Wilder to sit down man to man to iron out our differences in the game, and get this fight made. Me and him should talk 100%. Look at the situation with [Luis] Ortiz. We offered him a big deal. His promoter turned down the deal, then Ortiz said he wanted the fight. It’s just back and forth back and forth. Hopefully, we [Joshua and Wilder] can go direct and see who’s serious. I’m coming here [to the U.S]. I could have stayed in London, fighting in front of 50-60,000 people, fighting the guy from around the corner, but I wanted these challenges. If I could make it happen out there, coming out here not to take part, but aim to take over sooner or later. I believe they want the fight,” Joshua said about Wilder and Fury.

Sooner or later, Joshua and Wilder will likely face each other if the two of them can agree on a contract.