Buatsi vs. Periban on June 1 at MSG, NY 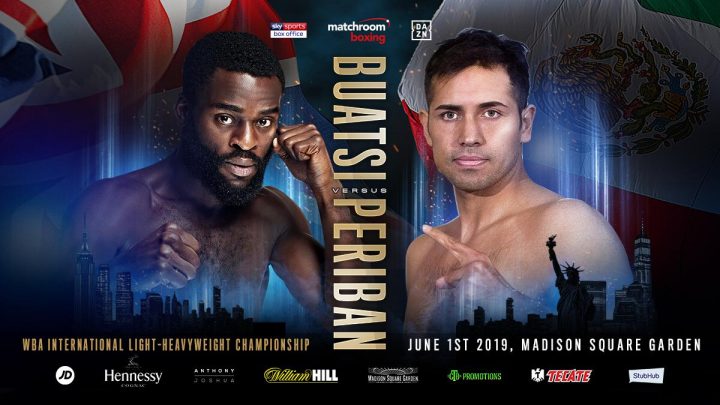 By Scott Gilfoid: Unbeaten rising light heavyweight contender Joshua Buatsi will be making his U.S debut against super middleweight journeyman Marco Antonio Periban on June 1 on the undercard of Anthony Joshua vs. Andy Ruiz Jr. on DAZN in the United States, and Sky Sports Box Office in the UK at Madison Square Garden in New York.

Buatsi’s promoter Eddie Hearn of Matchroom Boxing has picked an opponent in Periban, who hasn’t fought in two years, since losing to Avni Yildirim by a one-sided 12 round unanimous decision on May 13, 2017. Yildirim is hardly a world beat at 168, but he had an easy time beating Periban by the scores 116-111, 117-110 and 117-110. There’s obviously a rationale for Hearn selecting a weaker opponent like Periban for the 26-year-old Buatsi to fight on June 1 instead of a talented one that could test him, and show the American whether he’s got the goods to ever become a world champion. The first obvious reason why Hearn selected Periban for Buatsi to fight is he wants to have him in a showcase match to make him look exceptional in front of casual boxing fans that has never seen him fight before. For a lot of Americans, they’ve never heard of Buatsi. So if they see him destroy Periban, they might get on board and want to tune in to watch him on DAZN in the U.S in the future. The other reason why Hearn may have selected Periban is he’s hoping that a lot of Mexican boxing fans will show interest in the Buatsi-Periban fight due to Periban coming from Mexico.

In the main event, Joshua is facing a Mexican-American fighter in Andy Ruiz Jr. (32-1, 21 KOs), and Hearn is counting on a lot of Mexican fans tuning in to see the fight on DAZN. Still, it’s not doing Buatsi or the U.S fans any favors for a mismatch like this to be taking place. Periban hasn’t fought in 2 years, is coming off of a loss to Yildirim, and has beaten in the past when he stepped up against James DeGale, Sakio Bika and J’Leon Love. Periban does have a highly controversial 10 round draw on his record against former two division world champion Badou Jack in September 2013, but he appeared to lose that fight. That was a fight that took place in Las Vegas, Nevada, and the scoring made no sense. This writer had Jack beating Periban 9 rounds to 1. It wasn’t even a remotely close fight.

Buatsi will be defending his World Boxing Association International 175-pound title against Periban. It’s unclear why Buatsi is defending his WBA International strap against a fighter from the 168-pound weight class. That’s the weird part about this. If Hearn wanted Buatsi to defend his trinket strap against someone, why didn’t he select an opponent from the light heavyweight division instead of selecting him from the super middleweight division? Secondly, why did Hearn pick a fighter that is coming off of a defeat and a TWO year layoff like Periban? Anthony Joshua fought 40-year-old Wladimir Klitschko when he was coming off of a two-year-old layoff and a loss, but that was a different situation somewhat. It was still bad, but not nearly as bad as Hearn matching Buatsi against a 2nd tier fighter that is coming off of a loss, and hasn’t fought in two years. Why is Hearn matching Buatsi against such an obviously poor opponent like Periban?

“As Britain takes over the Mecca of boxing next week in NY, it’s only right that one of our biggest rising stars gets the chance to shine,” Hearn said. “Joshua Buatsi has been sensational since turning professional and next week gets the chance to make his US debut on the biggest stage of all. We expect a tough challenge from Periban who will have big support at the arena from the Mexican fans hoping Andy Ruiz can make history for his country. Periban has mixed in great company and this is the perfect test for Josh as he closes in at shot at the World title. Next week is going to be special in so many ways, I can’t wait,” Hearn said.

Buatsi recently captured the vacant British light heavyweight title with a third round stoppage win over Liam Conroy (17-4-1, 9 KOs) on March 23 at the Copper Box Arena in London, England. Before that, Buatsi had a pair of first round knockout wins over former IBO super middleweight champion Renold Quinlan and journeyman Tony Averlant. It’s hard to tell how good Buatsi is because the match-making has been on the poor side for him since he turned pro in 2016 after participating in the Olympians in Rio de Janeiro. In the 2016 Olympics, Buatsi lost to Adilbek Niyazymbetov (Kazakhstan) by a 3-0 score. That was the last time Buatsi fought a quality opponent.

Hearn is looking to get Buatsi in position to fight for a world title. Presumably, Hearn is targeting WBA 175-pound champion Dmitry Bivol. Buatsi is not going to be ready when the time comes to challenge Bivol if all Hearn is going to do is put him in with fodder like Periban. On the positive side, Buatsi has age in his favor when it comes to older light heavyweight champions like 34-year-old Artur Beterbiev and 35-year-old Sergey Kovalev. However, that’s not a guarantee for future success. Right now, you would have to favor both of those guys to easily beat Buatsi. When the time comes for those fighters to be beaten, there will likely be a lot of newer lions that have come up, and Buatsi still will never become a world champion. Buatsi is a good fighter, but he’s not the shown the kind of talent that suggests that he’ll become a world champion. He’s like a step up from Anthony Yarde, but not a big step up. He’s just a little less flawed as Yarde.

The June 1 card on MSG, New York is filled with a lot of disappointing mismatches similar to the Buatsi v. Periban fight. Hearn appears to have assembled an undercard of showcase fights in which his Matchroom fighters are pitted against guys that have little chance of winning.

Here are the notable fights on the Joshua-Ruiz Jr. card:

– Anthony Joshua vs. Andy Ruiz Jr: This bout is perceived as a mismatch/showcase fight for Joshua to look good in the eyes of U.S boxing fans for his debut fight in the States.

– Joshua Buatsi vs. Marco Antonio Periban: Ditto. This is same situation as the Joshua vs. Ruiz Jr. fight. Buatsi put in with a guy that has no shot of beating him, which is kind of sad, because Buatsi is going to need to have experience when he eventually challenges for a world title against WBA light heavyweight champion Dmitry Bivol or IBF champ Artur Beterbiev

– Callum Smith vs. Hassan N’Dam: This fight is just as bad a mismatch-up as the Buatsi-Periban and Joshua-Ruiz Jr. fights. The unbeaten WBA Super World super middleweight champion Callum (25-0, 18 KOs) is one of the best fighters in the 168-pound division facing 35-year-old former WBA ‘regular’ middleweight champion N’Dam (37-3, 21 KOs), who has fought only once in the past two years. N’Dam was stopped in the seventh round by Ryota Murata in October 2017. After that, N’Dam didn’t fight again for 14 months until coming back last December to defeat Martin Murray by a 12 round majority decision. “N’Dam-Callum; some bloke came to me and said, ‘You criticized Billy Joe Saunders’ opponent [Shefat Isufi],'” Hearn said to IFL TV. “N’Dam is a former world champion. He beat [David] Lemieux. He’s beaten Ryota Murata. He’s a decent world level fighter, but will he beat Callum Smith? I don’t believe so. Callum Smith is going to defend his world title at Madison Square Garden in a competitive fight,” Hearn said. If this is a competitive fight, then it won’t say much about Callum. He should be able to smash N’Dam if he’s truly the best fighter in the 168-pound division like Hearn believes him to be. It’s just kind of troubling that Hearn chose to match Smith against a struggling middleweight like N’Dam rather than one of the top contenders from the 168-pound division. The way that Hearn is matching Callum in this fight is closely similar to the way he’s matching Buatsi by putting him in with a fighter from a division below him.