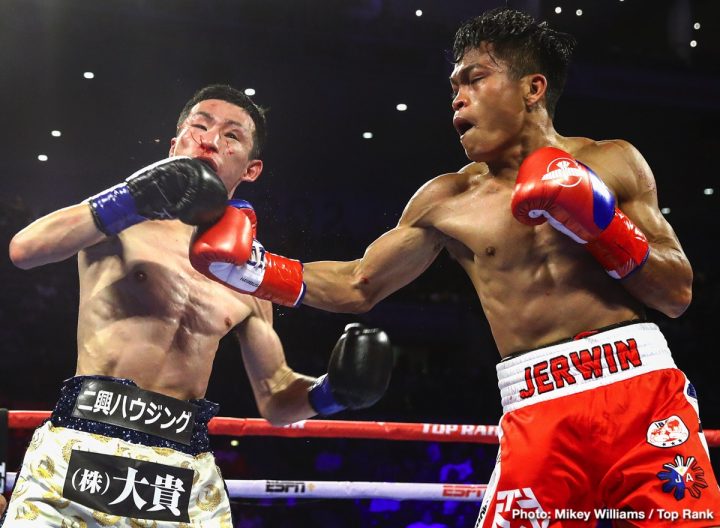 By Barry Holbrook: IBF super flyweight champion Jerwin Ancajas (31-1-2, 21 KOs) destroyed #1 IBF Ryuchi Funai (31-8, 22 KOs) in stopping him in the seventh round on Saturday night in a one-sided contest on the undercard of Artur Beterbiev vs. Radivoje Kalajdric at the Stockton Arena in Stockton, California.

Funai took a lot of punishment in this fight. It wasn’t competitive after the third round. Ancajas just battered Funai.

This was another good performance by Ancajas in showing off his punching power. Funai, 33, was there to be hit the entire fight. He suffered a bloody nose in the early going, and that was a target for Ancajas to aim his heavy shots. Funai was willing to slug with Ancajas, and that made it worse for him because he was getting thrashed by the powerful Filipino knockout artist.

Albuquerque-born welterweight prospect Brian Mendoza (17-0, 12 KOs) impressed in his Top Rank debut, knocking out Carlos Rodriguez (12-8-1, 5 KOs) with a single left hook in the second round.

Mendoza had not fought in nearly 18 months, but he found his rhythm after a shaky first round.

“My trainer actually called the {knockout punch} before the second round. He was expecting the 1-2, and I came back with the hook,” Mendoza said. “I missed it a few times, but I caught him, and it was over.

“I’ve been out of the ring a long time, and it took me only one round to shake off the ring rust. I’m back.”

Light heavyweight contender Felix Valera (18-2, 15 KOs) notched his third consecutive victory, stopping Mario Aguilar (20-7, 17 KOs) with a barrage of punches in the fourth round. Referee Marcos Rosales halted the bout as Aguilar took a beating against the ropes.