Jermain Franklin and Otto Wallin in action on July 12 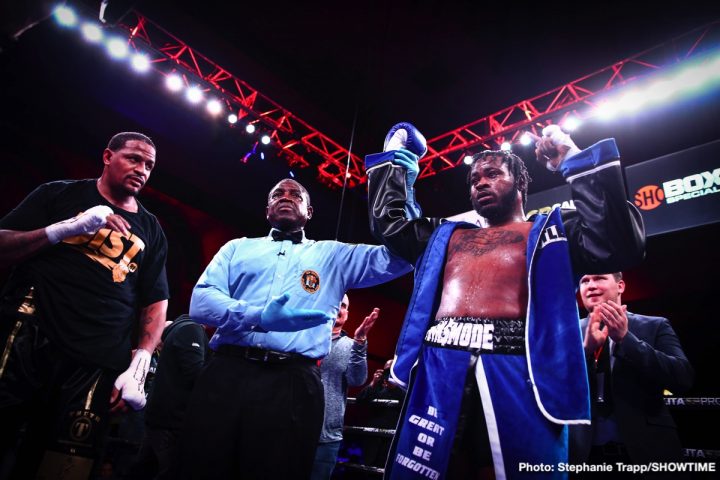 Two top undefeated heavyweight prospects will put their unblemished records on the line when they fight in separate bouts on ShoBox: The New Generation Friday, July 12 live on SHOWTIME from Emerald Queen Casino in Tacoma, Wash.

Top American heavyweight prospect Jermaine Franklin returns for his second consecutive test of 2018 on ShoBox against the streaking Jerry Forrest in the 10-round headliner. In the co-featured bout, undefeated Swedish heavyweight and top-10 ranked contender Otto Wallin will battle former world title challenger BJ Flores in a 10-round clash on the seventh ShoBox telecast of 2019.

“The heavyweight division is the strongest it’s been in a generation with a number of new faces looking to position themselves for an eventual title shot,” said Gordon Hall, Executive Producer of ShoBox. “Otto Wallin is on the doorstep based on his rankings in the top 10 but he needs that statement win to get there. BJ Flores is not coming to test Wallin. He is coming to win and feels he has what it takes to teach Wallin a lesson.

“Jermaine Franklin is the best American heavyweight prospect and, at only 25 years old, still has a ton of growth potential. He passed his first test on ShoBox in April and we look forward to getting a second look at him in another step-up fight. Forrest is far more experienced than Franklin. This will be his fifth fight of 2019, and he is fully aware of what a win will do for his career.”

Tickets for the event, which is promoted by Salita Promotions in association with Brian Halquist Productions, go on sale Saturday, June 1 and are available via Ticketmaster and the Emerald Queen Box Office.

“This is an exciting time for the heavyweight division and on July 12 boxing fans will have an opportunity to witness two of the division’s best new faces in significant tests,” said promoter Dmitriy Salita. “Jermaine Franklin’s goal is to be an American heavyweight world champion, and an impressive performance in a tough matchup with Jerry Forrest will be a significant step in his quest to the title.

“Otto Wallin is an example of what happens when you combine dreams and hard work. He grew up in a small town in Sweden and aims to challenge for the heavyweight world title and follow in the footsteps of Ingemar Johansson. Otto is fighting a proven veteran in BJ Flores who’s only losses have been in world title fights, so I expect it will be an exciting matchup from the opening bell.”

The 25-year-old Franklin (18-0, 13 KOs), from Saginaw, Mich., is a former amateur standout and a 2014 National Golden Gloves Champion. A likely candidate to represent the U.S. at the 2016 Olympic Games, Franklin turned down the opportunity to compete for a spot on the team and instead chose to begin his professional career in 2015. Widely regarded as the top American heavyweight prospect, Franklin has built his undefeated record with relative ease since turning pro, knocking out nine of his first 10 professional opponents. Franklin made his SHOWTIME debut in the co-featured bout of the Claressa Shields vs. Christina Hammer event in April, earning a unanimous decision over former No. 1-ranked U.S. amateur Rydell Booker.

“In my SHOWTIME debut earlier this year, I felt I could have put on a better show but I won and that’s most important,” Franklin said. “Winning this fight is an important step toward my dreams of fighting for a heavyweight championship. This fight also is a chance for the fans to see me more focused and prepared. Jerry Forrest has been around the game for a while and he brings a lot of skills to the ring. I will be ready for him.”

“This is a long time coming for me,” said Forrest. “My record and my potential are definitely worthy to fight in the main event on national television. This is where I should be. I’m very comfortable and I’m not at all overwhelmed. I’ve fought in the Nationals and big tournaments and I’m not afraid of the spotlight. Franklin throws a lot of punches and tries to bully you out. He’s not super accurate from what I see. He’s a heavyweight who will try to outwork you. I see him as a very similar fighter to Andy Ruiz. My training is going great, I haven’t been out of shape in two years. I’ve been in the gym grinding and doing it old school.”

Wallin (20-0, 13 KOs, 1 ND) made his U.S. debut on SHOWTIME in April, also on the undercard of Shields-Hammer, but his fight with Nick Kisner was cut short after an accidental headbutt left Kisner unable to continue, resulting in a No Decision. The 6-foot-5 Wallin turned pro in 2013 and has gradually risen in the rankings by recording 20 straight wins in Europe prior to his American debut. The 28-year-old southpaw won the Swedish Boxing Championship at 16-years-old, fought against Anthony Joshua twice as an amateur and was a member of the Swedish National Boxing Team. Currently ranked in the top-ten by both the WBA and IBF, Wallin now has his sights set on becoming his country’s first Heavyweight Champion since Ingemar Johansson in 1960.

“My U.S. debut did not go the way I had hoped and I didn’t get a chance to show off my skills,” said Wallin. “I’m really looking forward to going out there again getting a chance to show a lot more. This is a fight I need to win if I want to go somewhere. I need to win and I need to look good doing it. I need to be sharp at all times and not take anything for granted. This is a sport where everything can change in the blink of an eye.”

Flores (34-4-1, 21 KOs) turned pro in 2003 and has enjoyed a long, successful career competing mostly as a cruiserweight. Undefeated through the first seven years and 25 fights of his career, Flores suffered his first setback when he traveled to Australia to challenge Danny Green for his IBO Cruiserweight world title, dropping a unanimous decision. The Arizona native bounced back by winning eight of his next nine fights before getting a second chance at a world title, again traveling to his opponent’s hometown. This time, Flores was stopped by WBC Cruiserweight champion Tony Bellew in Liverpool. Flores has since moved to heavyweight, where he has won two of his three fights.

“Not only is this a winnable fight for me, I am 100 percent winning this,” said Flores. “I’m working with [trainers] Angel Heredia and Ibn Cason and world class heavyweight Kubrat Pulev. Working with this team is perfect for getting my strength and conditioning up for this fight, and sparring with one of the top guys in the world in Pulev is making me very sharp. I know Wallin is undefeated and has a good amateur style. He’s tall and has good boxing ability. I know he’s got some talent and is a young up and coming guy. He’ll be trying to make a name for himself off of my name, so I’ll be ready for that.”