Francesco Patera vs Paul Hyland on June 28, live on DAZN 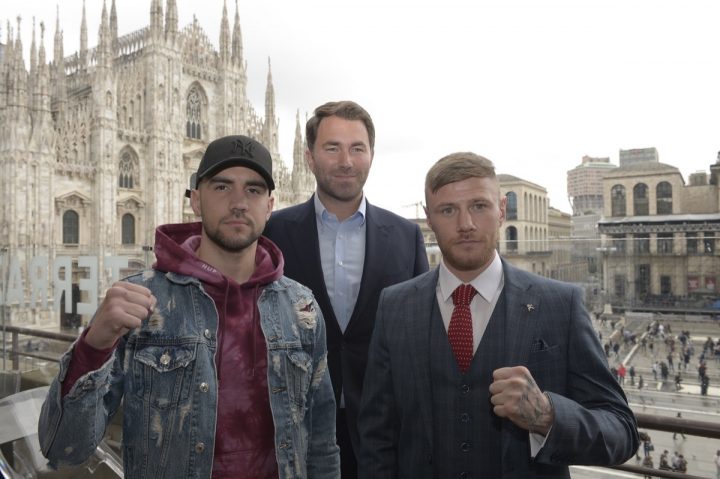 Francesco Patera will defend his EBU European Lightweight title against Paul Hyland Jr on the same night that Daniele Scardina defends his IBF International Super-Middleweight title in an all-Italian clash with Allesandro Goddi at the historic Allianz Cloud, formerly Palalido, in Piazzale Stuparich, Milan on Friday June 28, live on DAZN.

Patera (21-3, 7 KOs) wrestled the European title from Newcastle’s Lewis Ritson in the former champion’s hometown back in October with a well-earned split decision that saw the Belgium resident reclaim the belt he lost against Edis Tatli, before making a successful defence against Frenchman Marvin Petit in February.

The 26-year-old is honoured to be fighting in his parent’s homeland for the first time in his career and is promising to deliver a special performance as he works towards securing a World title shot later in the year.

Hyland Jr (20-1, 7 KOs) suffered his sole career loss to Ritson last year in a failed bid for the British title in Newcastle but bounced back with wins over Giovanny Martinez and Miroslav Serban in Ireland, and the Belfast fighter will be hoping to land the full European crown having previously held the IBF’s version of the title.

Rozzano’s Scardina (16-0, 14 KOs) makes the first defence of the IBF International belt that he landed against Finland’s Henri Kekalainen at the Superstudio in Milan in March, the Miami resident was taken the distance for only the second time in his career and is aiming to return with a big KO against Sestu’s Goddi (35-4-1, 17 KOs) next month.

Elsewhere on the card, unbeaten Bergamo Welterweight talent Dario Morello (14-0, 2 KOs) clashes with Belgium’s Steve Jamoye (26-7-2, 5 KOs) for the WBO Global title, with further exciting additions to the undercard to be announced soon.

“I’m delighted to be back in Milan for what is our strongest Matchroom Boxing Italy show to date,” said promoter Eddie Hearn. “The main event features an all Italian Super-Middleweight war between Scardinia and Goddi and the impressive European Lightweight champ Francesco Patera makes his second defence of his title against Belfast’s popular Paul Hyland Jr. Rising stars Morello, Zucco and Prodan also star as we return to the stunning Allianz Cloud arena, former venue to iconic Italian fights. Don’t miss the action in Milan or watch live on DAZN!”

“We are very happy to return to the Allianz Cloud, formerly known as Palalido, where we have many great memories,” said Salvatore Cherchi, President of OPI Since 82. “We have staged major European and World title bouts at the famed venue and history will continue on June 28 with three exciting championship bouts and a host of emerging Italian prospects.”

“We are very happy to be among the first to host a great sport event within a venue that, after having made the history of the city of Milan, renovates and becomes again the “theater’ of Italian boxing,” affirms Veronica Diquattro, Executive Vice President Southern Europe of DAZN. “This is a further proof of DAZN’s will of being an active protagonist in the growth of international boxing, that also goes through a strong relaunch in our country.”

Patera vst Hyland Jr At The Allianz Cloud In Milan

Today in Milan, at the trendy and luxurious Terrazza Duomo 21, in the heart of the city right in front of the Duomo Cathedral, a big crowd of journalists, photographers and boxing people attended the press conference organized by Opi Since 82, Matchroom Boxing Italy and DAZN to present the June 28th event at historic Palalido-Allianz Cloud arena: in the double main event IBF International super middleweight champion Daniele Scardina (16-0 with 14 KOs) will defend against Alessandro Goddi (35-4-1) and European lightweight champion Francesco Patera (21-3) will defend against Paul Hyland Jr. (20-1). The show will be streamed live by DAZN.

Matchroom Boxing Italy President Eddie Hearn is happy to promote at Palalido: “This is the 4th event promoted by us with Opi Since 82 and DAZN, the first one in a legendary arena which greatly contributed to the history of boxing in Italy. I’m glad to see that so many journalists showed up today. No sport can grow up without media coverage and live television or live streaming. I expect the Milanesi fans to show up in great numbers and maybe sellout the venue as we offer high caliber Italian fighters. This show is a major step toward our goal to bring world title fights back to Italy soon. Our schedule is to make it happen in one year.”

On the same page Opi Since 82 President Salvatore Cherchi: “I promoted many shows at Palalido and I have wonderful memories. My dream is to bring back to Milan a world title fight. With Eddie Hearn and DAZN we are working to make it a reality.”

Miami Beach resident Daniele Scardina came back to Italy only for the press conference: “This fight is important to me because is my first defence of the IBF International belt. I must go back soon to Miami Beach to train at 5th Street Gym with the many world champions who train there. I want to be in top shape on June 28th to keep my belt and one day fight for the world title and win it.”

Francesco Patera was thrilled to fight in Italy for the first time: “I was born in Belgium and I was part of the national team, but I feel Italian and fighting in this country as European lightweight champion is my dream. My brother Biagio was a pro in the light heavyweight division. We got passion for boxing from our father. I consider Paul Hyland Jr. a very good fighter, but I’m sure to win on June 28th at Palalido.”

Paul Hyland Jr. is also very confident: “I saw some Patera’s fights and I know that he is an excellent champion, but I have fought many tough opponents and I am in perfect shape. I was training for another fight when they told me that I could fight for the Euro belt and want to make the most of this opportunity. I will become European lightweight champion in Milan.”

The show will provide a 3rd title fight: Dario Morello (14-0) will fight Belgian Steve Jamoye (26-7-2) for the vacant WBO Global welterweight title on the 10 rounds distance.

On June 28th some talented fighters will show how much they are worth. Maxim Prodan (16-0-1), Ivan Zucco (7-0), Luca Capuano (9-0), Riccardo Merafina (5-0) and Nicholas Esposito (9-0) will fight on the 6 rounds distance. The names of their opponents will be announced soon.