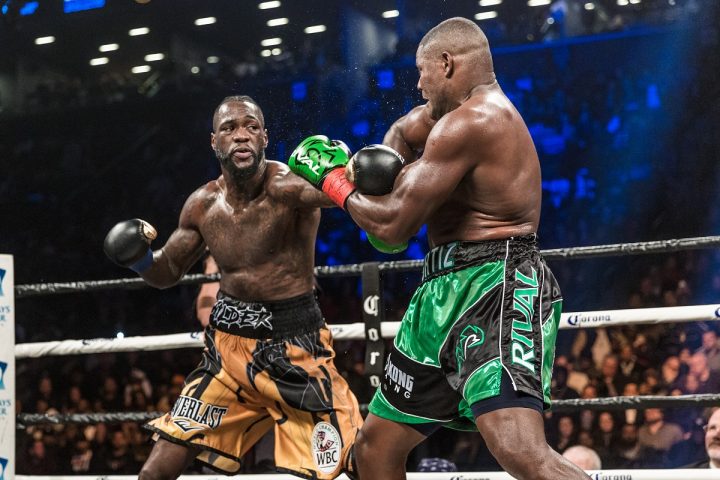 By Sean Jones: It’s now official that Deontay Wilder will be defending his WBC heavyweight title against Luis ‘King Kong’ Ortiz in a rematch with the date and venue to be announced. Wilder (41-0-1, 40 KOs) revealed the news on Tuesday night on his social media site in letting his millions of followers know that his next title defense will be against the 40-year-old Ortiz (31, 26 KOs).

Wilder’s rationale for making the rematch with Ortiz is because he wants to clear up his “controversial fights,” and that was one of them. Wilder, 33, beat Ortiz by a tenth round knockout last year in March 2018 at the Barclays Center in Brooklyn, New York.

Wilder’s move in announcing the Ortiz rematch was a brilliant one, enabling him to neutralize IBF/WBA/WBO heavyweight champion Anthony Joshua’s attempts to call him out on Saturday night after his fight against Andy Ruiz Jr. on DAZN and Sky Box Office at Madison Square Garden in New York. In what appears to be a strategy by Joshua and his promoter Eddie Hearn, he’s been calling out Wilder since Monday. It’s obvious by now that Joshua is going to spend the entire fight week name dropping Wilder’s name, calling him out, and trying to goad him into making the fight with him in November or December. With Wilder having officially announced his rematch with Ortiz, Joshua can’t call him out for a fight in 2019, because he’s now booked for the remainder of the year. It was a smart move by Wilder to announce the Ortiz fight now rather than later.

Joshua is going to have to get in line

There’s three guys that are now in front of Joshua waiting to get a fight with Wilder. The front of the line now starts with Ortiz followed by Adam Kownacki, and then Tyson Fury bringing up the rear. Right now, Joshua is at #4 in the queue. That could change with someone else getting in front of him. It depends on how Wilder’s matches against Ortiz, Kownacki and Fury go. If those fights have controversial outcomes, then Wilder will want to fix that.

The Wilder-Ortiz fight was controversial due to the New York State Athletic Commission checking Wilder out before letting him go out for the eighth round. Deontay had been badly hurt in the seventh round by Ortiz, and he barely made out of the round. Wilder still looked hurt as he walked out of his corner at the start of the eighth. The New York Commission delayed the start of the eighth round so that they could checkout Wilder to see if he was fine.

It makes sense why Ortiz turned down Joshua fight

It’s now clear why Ortiz rejected the offer from Matchroom Boxing to fight Joshua for his June 1 date at MSG. The money wasn’t enough for Ortiz to take the fight, but also he already had the rematch with Wilder in the oven. That fight was already happening, and the only way the plans could have changed is if Hearn offered Ortiz the $9 million that he wanted for the fight. Since that didn’t happen, Joshua had to settle for defending against the Ruiz Jr., who will never be mistaken for a bodybuilder. Joshua got an opponent, but not an A-level guy like Ortiz, and not someone that is going to attract fans; hence, Joshua is talking about Wilder and Tyson Fury this week instead of his opponent Ruiz Jr. Joshua could talk about Ruiz Jr. until he’s blue in the face, and it wouldn’t help.

The fans are complaining right now that Wilder isn’t giving them the fight that they want against Joshua, but there’s a reason for that. First off, Joshua and Hearn haven’t offered Wilder the 50-50 deal that he wants for him to take the fight. Wilder has told them repeatedly that he wants 50% of the revenue for that fight, but they haven’t given him what he’s asking for. Secondly, Wilder has unfinished business with both Ortiz and Tyson Fury that he needs to take care of first before he faces Joshua. Wilder and Fury fought to a controversial draw last December. Wilder would have won the fight if the referee had simply stopped the match after Fury was knocked down in the 12th. Nevertheless, the fight was scored a draw, and a lot of boxing fans want to see a rematch.

Joshua had a chance to fight Ortiz

Ortiz was trying to get a fight with Joshua since 2016. It wasn’t until recently that Joshua’s promoter Eddie Hearn made an effort to make a fight between him and Ortiz. They waited until he was 40 before they tried to make the match, and then they didn’t stay in the negotiations long before giving up and signing Ruiz Jr.

As the saying goes, ‘all good things come to those who wait.’ Joshua will eventually get the fight with Wilder, as long as he’s willing to wait. Patience is the key. Joshua needs to keep his head on straight, and not get frustrated by the process. His fight with Wilder is going to get bigger the longer he waits.