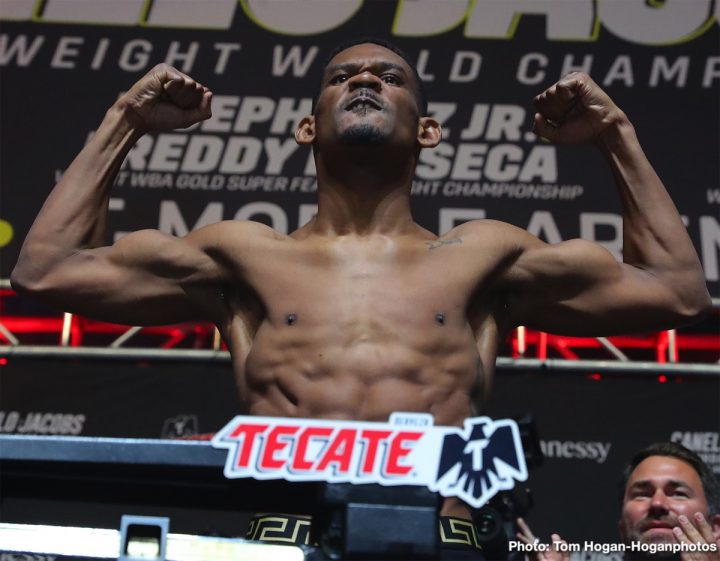 By Dan Ambrose: Oscar De La Hoya of Golden Boy Promotions says his team didn’t change the IBF’s 10-pound rehydration rules for tonight’s fight between WBA/WBC middleweight champion Saul Canelo Alvarez and IBF champ Daniel Jacobs at the T-Mobile Arena in Las Vegas, Nevada. According to De La Hoya, Golden Boy just made sure the IBF’s 10-lb. rehydration rule was in effect for the safety of the two fighters. Jacobs maintains that the IBF’s rehydration rule doesn’t apply for unification fights; only for regular title defenses by an IBF title.

“We’re not one to change the rules or to implement rules. We’re just going by what the IBF rule has been for many years,” De La Hoya said to Fighthub about the rehydration limit of 10 lbs for this Saturday morning. “It does make sense for the safety of the fighters, and we understand that. No, that’s not the case [that Golden Boy implemented the rehydration clause where it’s not needed in order to try and weaken Jacobs]. Fighters sometimes get a little delusional when making weight. They tend to come up with all these philosophies of why everyone is against us. Look, we’re just going by the rules of what the IBF made us aware of. There are no motives here or bad intentions. It’s just a rule is a rule,” De La Hoya said.

Someone from the IBF would obviously be the one to clear up this bit of confusion, because De La Hoya is saying that Golden Boy Promotions is just following the IBF’s rules by making sure there was a 10 lb rehydration rule that was in effect for the fight, which limits the amount of weight the two fighters can rehydrate to. They can’t come in over 170 lbs for this morning’s secondary weigh-in at 8:00 a.m. What’s hard to understand is where the $100,000 per pound weight penalty came from? Is that the IBF’s rule or is that something that Golden Boy Promotions came up with. Jacobs says they initially wanted over $200,000 for the weight penalty, but then changed it to $100K.

“It’ll be his speed and power. A lot of people don’t realize that Canelo is the bigger guy,” De La Hoya said. “He’s smaller, but he’s thicker. He’s always been a guy with a thick neck, and thick legs. Canelo has always been the one to drop weight. Canelo walks around at 190, 185. So a lot of people will be very surprised when they step inside the ring and see the minimal difference in size,” De La Hoya said.

It doesn’t make sense for De La Hoya and Golden Boy to be insisting on a rehydration clause if Canelo were actually bigger than Jacobs, does it? If Canelo was struggling with the weight, why would Golden Boy insist that there be a rehydration clause for the fight? Wouldn’t that make things more difficult for Canelo to make weight and perform at a high level for the fight? It doesn’t make sense what De La Hoya is saying. If anything, Golden Boy and De La Hoya would want to make sure there wasn’t a secondary weigh-in if Canelo would be potentially weakened.

Jacobs did sign the contract that had the rehydration language written into it, but he says he to agree to the stipulations otherwise he wouldn’t have gotten the fight with Canelo. In other words, Jacobs didn’t believe he would still get the fight with the Mexican star Canelo (51-1-2, 35 KOs) if he’d said no to the 170 lb. secondary weigh-in limit for today’s weigh-in.

The promoter for Jacobs, Eddie Hearn of Matchroom Boxing, jokingly said that he would pay the weight penalty if he came in over today’s 10-lb rehydration limit for the fight, but it didn’t look like he was serious. As wealthy as Hearn is, he could easily handle Jacobs coming in four to five pounds over the limit at say 174 lbs. this morning without it hurting him. It would be an extra $400,000 that Jacobs or Hearn would need to pay. Is it worth paying that extra money in order to win the fight? The massive money that Jacobs would make in a rematch with Canelo would more than make up for the initial loss of $400K by him coming in over the 170-pound weigh-in limit for today’s secondary weigh-in. Jacobs would make massive money in a second fight with Canelo, and Hearn would be a very happy camper with his fighter bringing in lots of money to his Matchroom Boxing USA promotion.

Canelo isn’t still growing. He’s almost 30-years-old. He’ll be turning 29 in July, and there’s little chance that he’s going to grow anymore at this stage in his career other than getting heavier as the years go by. If that’s what De La Hoya is talking about when he says Canelo is “still growing,” then of course, a lot of fighters continue to add weight as they get older due to their metabolism slowing down. It’s not always the case though. A lot of fighters stay the same with their weight, but those are the ones that aren’t pigging out with lots of carbohydrate laden foods in between fights. If Canelo is going to pack on the pounds by eating a lot in between fights, his weight will creep upwards steadily until he has no option but to move up to 168, and then possibly 175