Chris Algieri vs. Tommy Coyle on June 1 at MSG, NY 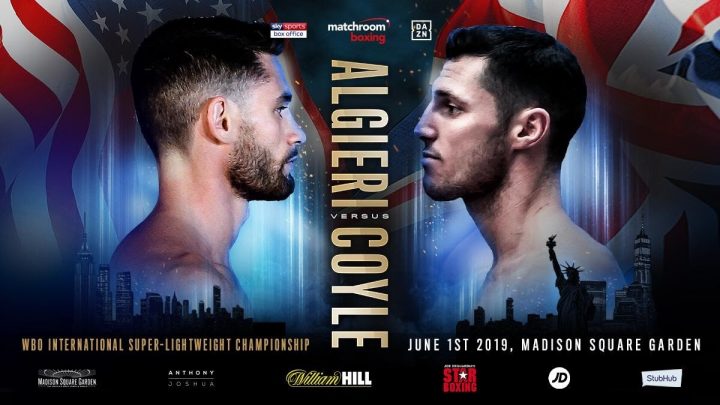 By Barry Holbrook: Chris Algieri (23-3, 8 KOs) will be facing British fighter Tommy Coyle (25-4, 12 KOs) in a 10 round fight on June 1 on the undercard of the heavyweight fight between IBF/WBA/WBO champion Anthony Joshua and Andy Ruiz Jr. on DAZN at Madison Square Garden in New York.

This will be former WBO light welterweight champion Algieri’s third fight since 2016. He’s not been a busy fighter since being blown out in five rounds by Errol Spence Jr. in April 2016.

Algieri lives in Huntington, New York, so he’s perfect for the card. Matchroom Boxing USA promoter Eddie Hearn wants to have some east coast fighters to bring in the fans from the nearby area. In the main event on the card, Joshua was originally scheduled to fight New Yorker Jarrell “Big Baby” Miller, but he tested positive for banned drugs, and taken off the card and replaced by Southern California native Andy Ruiz Jr. The loss of Miller to the card created the opportunity for New Yorker Algeri to be added to it.

Algieri looked poor in his last fight on January 18 against Daniel Gonzalez (17-2-1, 7 KOs) at Madison Square Garden. Algieri, 35, gassed out after the second round, and was backing up the last eight rounds of the contest against the 29-year-old Gonzalez. Although Gonzalez isn’t considered a puncher, he was was giving Algieri all kinds of problems with his power and his pressure. Algieri won the fight by the scores 96-94, 97-93 and 98-92. A lot of boxing fans felt that Gonzalez did enough to get the win. Of the scores handed in by the judges, the 96-94 score was the more representative of the outcome. Boxing News 24 had Algieri winning narrowly by a 96-94 score. Coyle is about on the same level as Daniel Gonzalez in terms of talent, so this is another fight that is winnable for Algieri if he has the gas tank to fight hard for more than two rounds this time. If Algieri fades after the second round against Coyle, he’ll lose, because the British fighter will put a lot of pressure on him to wear him down. The 29-year-old Coyle isn’t a puncher though. He’s not going to knockout Algieri.

“I’m very excited to be fighting once again at the ‘Mecca of Boxing,’ Madison Square Garden on June 1,” said Algieri. “I know that Tommy Coyle is another tough test for me and that a victory will bring me one step closer to another world title fight.”

Tommy Coyle isn’t ranked in the top 15 at 140 at this time. Algieri is rated #5 by the World Boxing Organization. If Algieri struggles against Coyle like he did in his last fight against Daniel Gonzalez, it might not be a good idea for Hearn to put him in with Hooker. Ideally, Algieri should fight one or two quality contenders before being given a world title shot against Hooker. Gonzalez isn’t a top 15 ranked contender, and neither is Coyle. Algieri should be fighting contenders to earn a title shot against Hooker. Algieri is pretty old at 35, and his best wins came many years ago. Algieri has lost three out of his six fights in defeats against Amir Khan, Spence and Manny Pacquiao. Those are good fighters obviously, but the fact of the matter if, Algieri lost to all of them, and he hasn’t beaten anyone good since his 12 round split decision victory over Ruslan Provodnikov in June 2014. That was five years ago. It might as well have been a lifetime ago for Algieri. His win over Provodnikov was a big upset at the time, as the Russian fighter was expected to win easily. Algieri was down twice in the first round of that fight, but he was able to come back and win a close decision. Unfortunately, Algieri hasn’t beaten anyone good since then. Algieri’s only three victories in the last five years of his career has come against lower level fighters in Angel Hernandez, Daniel Gonzalez and Erick Bone.

Coyle has put together a small three-fight winning streak since losing to Tyrone Nurse in July 2016. Coyle’s recent wins have come against Ryan Kielczweski, Sean Dodd and Rakeem Noble. In other words, Coyle has been beating non-ranked fighters.

During Coyle’s best years of his career, he defeated a shot Michael Katsidis, John Simpson, Daniel Eduardo Brizuela, and Martin Gethin. Those are Coyle’s best career wins along with his recent victories over Dodd and Kielczweski. When Coyle tried stepping it up against Luke Campbell, Derry Mathews, Gary Sykes and Tyrone Nurse, he was soundly beaten. Coyle lacked the talent to beat those guys. With Hearn backing Coyle off from fighting good opposition, he’d one well and put together a mini-winning streak.

I’m expecting [an Arturo] Gatti versus [Micky] Ward style fight, I really am. I know how tough Chris is,” Coyle said. “I think we’re both cut from the same cloth. It can only go one way, and I think that’s a war. I honestly believe that this fight has come at the perfect time for me.”

Coyle and Algieri are not on the same level, and they never have been. But if Algieri is unable to beat this level of opponent at this point of his pro career, then it’s obviously a sign that he would need to retire from boxing. Coyle is a second tier fighter, not a world class guy. If Algieri can’t beat Coyle, then it’s time to move on and focus on his job a a nutritionist for fighters. The way that Algieri looked in his recent fight against Gonzalez, he would have no chance against WBO champion Maurice Hooker, who is considered by many as the weakest link among the current champions at 140.

Some boxing fans are already grumbling about the undercard of the Joshua-Ruiz fight being a poor one. Eddie Hearn of Matchroom Sport had said that he was going to stack the Joshua vs. Ruiz Jr. undercard with great fights, but thus far that hasn’t happened. Although Hearn does have a lot of good fighters on the card, he doesn’t have opponents for them as of yet. Algieri vs. Coyle is not a good fight. Coyle is a domestic level fighter at best.

As of today, this is what the Joshua vs. Ruiz undercard is looking like:

Callum Smith vs. TBA: It’s likely to be Hassan N’Dam as
Callum’s opponent