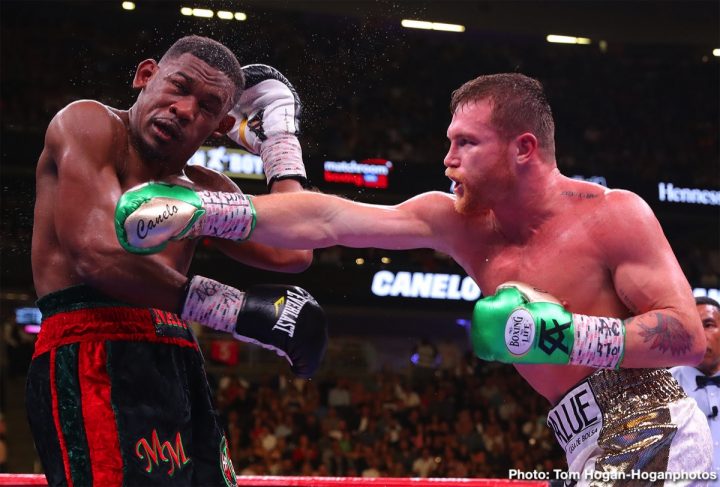 Canelo Alvarez (52-1-2, 34 KOs) successfully defended his WBC, WBA, Lineal and Ring Magazine Middleweight World Titles and became the new IBF Middleweight World Champion by defeating Daniel “Miracle Man” Jacobs (35-3, 29 KOs) via 12-round unanimous decision. Canelo with with two scores of 115-113 and one score of 116-112. The champion-vs.-champion event took place at T-Mobile Arena in Las Vegas and was streamed exclusively live on DAZN

On Daniel Jacobs switching to southpaw during the fight: “It’s normal. It’s obviously just a matter of adapting when they switch rightie to leftie.”

Who does he want next? “I’m just looking for the biggest challenge. That’s all I want.”

Is there unfinished business with GGG? “No, for me, it’s over. But if the people want another fight, we’ll do it again, and I’ll beat him again.”

“That’s why I’m here. That’s what I was born for. To fight. To defend what’s mine. I’ll fight anyone.”

“I feel accomplished, l feel great,” said Daniel Jacobs. “I have to go back to look at the tapes to see exactly what the judges thought. They said to me, that I was up, so I was still pushing forward because I wanted to finish strong. He’s a tremendous champion and I tip my hat to him. I gave my all out there. You’ll see Daniel Jacobs bigger and better next time.”

“It definitely took me a couple rounds to get my wits about me, to figure out his rhythm, because he’s a pop shotter. He was a fast guy, very slippery. It was a great contest today, I look forward to the future. I feel like I gave enough tonight to get the victory so I’ll have to go back to the tapes to see exactly what happened.”

“I didn’t feel any different. I’m just a naturally big middleweight. I made the sacrifice of coming in 173 and paying a hefty fine for it but at the end of the day, I made sacrifices. I got the short end of the stick, but to my fans, to all my survivors out there who appreciate me and my story for what I represent, I thank you. The journey is not over. I continue to strive for success and be the best I can be.”

On what he said to his son right after the fight: “I asked him, ‘do you think Daddy did a good job?’ He said, ‘yes Dad, you did a great job.’ That’s all that matters to me, I’ll go home and be the best I can be.”

John Ryder (28-4, 16 KOs) of London stopped Bilal Akkawy (20-1-1, 16 KOs) of Sydney, Australia via TKO in the third round to capture vacant Interim WBA Super Middleweight World Title. Ryder won with time of 2:12 in the aforementioned round.

“I felt great all week and it showed in there,” said John Ryder. “I’m delighted with the stoppage but even more so because I didn’t panic or rush when I had him hurt/ I picked my shots and put him away. To fight in Las Vegas was amazing and to put on a performance like that, possibly the best of my career, makes it all the more sweeter.”

“That was for the interim title. I’ve won an eliminator, and I’m number one in the WBA so the message is clear, I want Callum Smith next. He’s got a fight on June 1 on the AJ card and if he wins that, I want to fight him next. I’ve paid my dues and got into position for it. Callum is a brilliant fighter, and I know it’s a tough fight but it’s one that I want and I’d love. It would be a big fight in the UK and it would be a great fight too.”