Canelo has until August 4 to fight Derevyanchenko 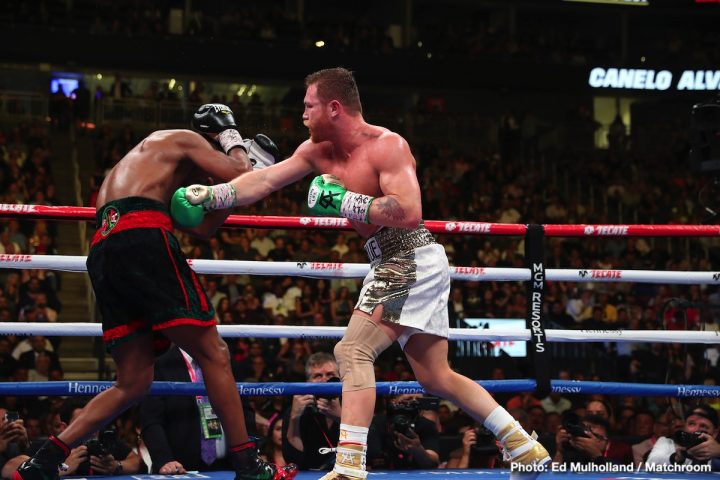 By Sean Jones: On Wednesday, the IBF ordered Saul Canelo Alvarez to start negotiations with IBF mandatory Sergiy Derevyanchenko for a fight that must take place by August 4. Canelo just recently picked up the IBF 160-pound title with a 12 round unanimous decision win over IBF champion Daniel Jacobs 12 days ago on May 4 in Las Vegas, Nevada.

The IBF isn’t leaving Canelo much time to savor his win over Jacobs. They want Alvarez’s promoters at Golden Boy Promotions to begin negotiations NOW with Derevyanchenko’s management.

There’s a couple of problems with Canelo agreeing to defend his IBF title against the 33-year-old Derevyanchenko (13-1, 10 KOs). Firstly, Canelo plans on fighting on the Mexican holiday on September 14 on DAZN against Gennady Golovkin in a trilogy fight that will bring in massive subscribers to DAZN. If Canelo faces Derevyanchenko by August 4th, the way the IBF wants him to, then he can’t fight on September 14. There won’t be enough time for Canelo to prepare for that fight. Secondly, Derevyanchenko is not a big enough mame for it to be worthwhile for Canelo to defend the IBF title against him, Derevyanchenko is arguably another Rocky Fielding in terms of popularity in the U.S. Although Derevyanchenko now lives in Brooklyn, New York, he doesn’t have a big fan base. The casual boxing fans in the States know Derevyanchenko for him losing recently to Daniel Jacobs last October in a fight for the vacant IBF middleweight crown.

The IBF’s requirements that Canelo defend his IBF title against Derevyanchenko puts the wheels in motion for the Mexican star to vacate the IBF belt, which would leave it vacant for Sergiy to fight for it against the next highest ranked contender in the sanctioning bodies’ rankings that’s willing to take the fight. The next highest ranked contender is Golovkin at #3 IBF, but he’s not likely going to want to waste one of his important fights with DAZN to face a non-star like Derevyanchenko. Golovkin just signed a six-fight deal with DAZN, and he’s already burning up his first fight with them by fighting an unknown 35-year-old fringe contender named Steve Rolls on June 8. DAZN wants to see GGG fight a rematch with Canelo Alvarez. They’re probably not going to be on board in favor of seeing Golovkin face another fighter without a big fan base in Derevyanchenko. If Golovkin took that fight, it would be his second match against a guy that likely won’t bring in a lot of subscribers to DAZN. After GGG, the next highest ranked contender in the IBF’s rankings is #4 IBF Kamil Szeremeta. That’s a fighter with zero experience against world class level opposition. Derevyanchenko would likely be a HUGE favor in beating the little known Szeremeta. The IBF might as well give Derevyanchenko their middleweight title if he’s going to be fighting Szeremeta for the strap.

“Negotiations should commence immediately and be concluded by June 15, 2019,” the International Boxing Federation said in a letter to Canelo’s promoters at Golden Boy Promotions via ESPN.com.

Canelo will try and get extension from IBF

The next move on Canelo and Golden Boy Promotions’ part is for him to attempt to get an extension by the IBF to allow him to take the fight on September 14 against GGG, and then face Derevyanchenko. That move workout well for Alvarez, because he’ll be just kicking the can down the road without facing the problem. Canelo will still likely need to fight Derevyanchenko in his next match after his September fight, which means he’ll still be wasting one of his valuable fights on his 12-fight, five-year, $365 million contract with DAZN. There isn’t a demand by the U.S boxing public in wanting to see Canelo fight Derevyanchenko. That fight won’t attract interest. The fans want to see Canelo face guys like Golovkin, Jermall Charlo, Callum Smith, Dmitry Bivol, Sergey Kovalev and Artur Beterbiev. Those are all great fights for Canelo. Derevyanchenko is NOT a good fight. That’s another wasted match for Alvarez. If you’re DAZN, you don’t want to see Canelo having to make mandatory defenses repeatedly against guys that bring nothing to the table in terms of increasing subscribers. That’s why it’s so much better if Canelo gives up on his goal of unifying the 160-pound division. It would be a great idea for Canelo to unify the weight class if he wasn’t recently given a huge contract by DAZN. If this was a situation where Canelo’s purse for the fights was dependent on the amount of PPV buys he brought in, then it would be on him and Golden Boy Promotions to pick out opponents that will produce the PPV buys. It’s different though with Canelo being given a huge contract with DAZN. Canelo take opponents that the fan have no interest in seeing him fight, and he’ll still get his money from DAZN. That’s it’s important for DAZN to make sure Canelo is fighting only guys that the fan care to see him fight. Since Canelo already wasted his first fight with DAZN by facing the no name Rocky Fielding, he can’t continue to fight obscure fighters just so that he can hang onto his paper titles. Canelo needs to be mature about this, and see the big picture. The casual boxing fans could care less if Canelo accumulates a bunch of meaningless paper titles. The fans only want to see Canelo fight great fighters. Given that Derevyanchenko was recently beaten by Canelo’s last opponent Jacobs, he’s clearly not a great fighter.

“It’s really surprising and unfortunate that we didn’t get a congratulations letter [from the IBF] like we would in the past,” Golden Boy Promotions president Eric Gomez said to Dan Rafael of ESPN.com. “We will be meeting with Canelo in the next week or so to see what he would like to do.”

Unifying middleweight division not worth the trouble for Canelo

If Canelo chooses to continue with his goal of unifying the middleweight division, it means he’ll need to the following things:

It might not be worth the trouble for Canelo to bother unifying the 160-pound weight class, because he’ll have to face two unpopular fighters in Derevyanchenko and Andrade for him to unify the weight class. Canelo would be better off skipping the idea of unifying, vacating all his middleeight belts, and going to 168 and 175 so that he can take on the likes of David Benavidez, Caleb Plant, Callum Smith, Dmitry Bivol, Sergey Kovalev and Artur Beterbiev. Canelo would receive much more attention from the boxing public in facing those guys than he ever will in fighting Andrade and Derevyanchenko.

Boxing » Canelo Alvarez » Canelo has until August 4 to fight Derevyanchenko