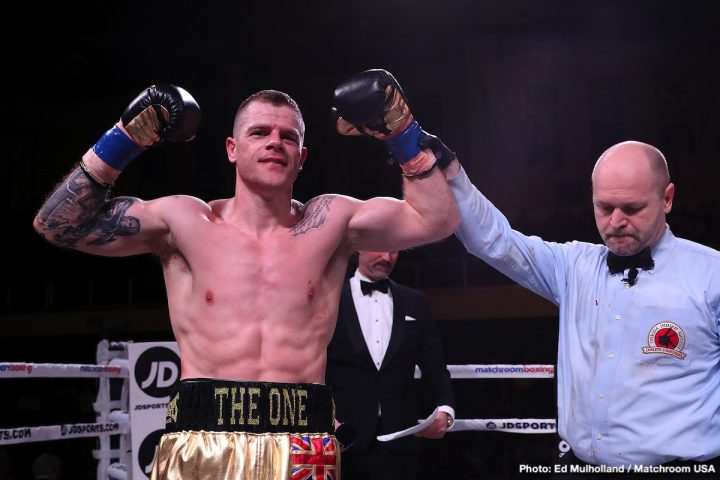 Smith defeated Sean Monaghan by a third round knockout last March. That was an impressive performance by the 33-year-old Smith, who had been stopped in his previous fight by IBF light heavyweight champion Artur Beterbiev last October.

“You’ve got the Callum Johnson fight, which is a great fight, but Callum is probably fighting Joe Smith Jr. over here,” Hearn said.

Smith Jr. lost to WBA 175-pound champion Dmitry Bivol by a 12 round unanimous decision on March 9 in Verona, New York. Johnson fought on the undercard against Monaghan, and easily won that fight.

“It’s a great fight for Buatsi,” Hearn said about his match this Saturday night against Periban. “A few people say he’s been inactive, Periban, and he’s a super middleweight. He struggled at super middleweight for a long time. Even when he boxed James DeGale, he had three or four attempts to make the weight. That was a long time ago. His last fight was a points defeat to [Avni] Yildirim, who probably now should be WBC world champion after the [Anthony] Dirrell fight. At super middleweight, he’s in excellent condition,” Hearn said.

Joshua Buatsi (10-0, 6 KOs) will be fighting the 6’1″ Mexican fighter Marco Antonio Periban (25-4-1, 16 KOs) in a 10 round fight this Saturday night on June 1. Buatsi-Periban is one of the undercard fights on the Anthony Joshua vs. Andy Ruiz Jr. card, and it’s not one of the better ones on paper. The fights will be streamed on DAZN in the United States, and on televised on Sky Box Office.

The 34-year-old Periban hasn’t fought in two years since his 12 round unanimous decision loss to Avni Yildirim on May 13, 2017. That large period of inactivity for Periban, which is precisely why many boxing fans view his fight with Buatsi being a bad one for the Joshua-Ruiz Jr. card. The fans want to see Buatsi fight relevant fighters.

“He’s coming to win,” Hearn said about Periban. “Obviously, another Mexican opponent is a good experience for Joshua Buatsi. I really feel Joshua Buatsi is going to go on and become a world champion, and these kinds of experiences are going to put him in good stead. Maybe that world title fight will come in America. Hopefully it’ll come in the UK. I just think Buatsi is an incredible talent. It’s going to be difficult to match him domestically,” Hearn said.

It won’t be difficult to match Buatsi if Hearn is willing to put him with talented contenders, but he seems reluctant to do that. For instance, Marcus Browne, Eleider Alvarez and Sullivan Barrera are interested in taking on top fighters. So, if Hearn wants to test out whether Buatisi has the goods to be the best at 175, he needs to put him in with those kinds of fighters.

With Buatsi fighting an old guy coming off of a 2-year layoff in Periban, it’s a no win situation. In other words, Buatsi won’t get credit for destroying Periban, because he’s been out of the ring for ages. Periban has losses to Sakio Bika, James DeGale, Yildirim and J’Leon Love. David Benavidez recently destroyed Love by a second round knockout victory last March, and that tells him all you need to know about him.

Buatsi has talent, but he’s not been able to show it due to the match-making by Hearn. Eddie means well, but he’s stunting Buatsi’s career.


« Spence to Thurman: “Don’t disappear IF you win” against Pacquiao

‘Joshua must put it on Wilder’ says Hearn »