Bunn vs Harth: Weigh In Results from Germany 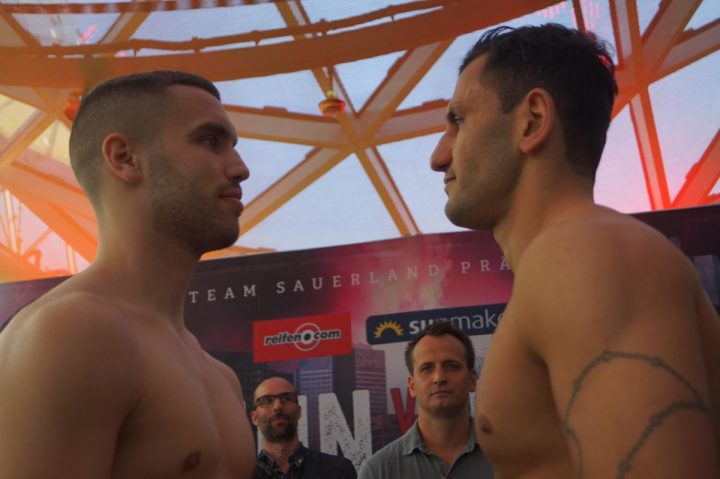 Bunn is looking to take the next steps in his promising career by claiming his first professional title, while Harth, a seasoned cruiserweight campaigner, is enjoying a fine run of form having moved down to light heavyweight, and will be hoping to further his World title claim with a victory in Frankfurt.

Leon Bunn (13-0, 7 KOs) and Leon Harth (18-3, 12 KOs) met today at the final press conference ahead of their IBF International Light Heavyweight title showdown on Saturday at the Fraport Arena in Frankfurt.

Bunn is gunning for first title as he headlines his hometown arena but will face stiff competition from his countryman Harth, who having made the move down from cruiserweight has claimed the IBO International and WBC Asian Light Heavyweight titles in his last two contests.

“There are no doubts about my victory, very good sparring partners, great preparation, no weight problems,” said Harth. “My switch from cruiser to light heavyweight was the best thing I could do – Leon Bunn will feel that on Saturday and I will take the belt to Munich.”

Leon Bunn was equally confident. “I’m boxing at home, my fans will drive me to victory, there’s no doubt about that,” Bunn said. “I’ll never stop. The title will remain in Frankfurt and I can’t wait for it to start.”

Harth’s head coach Alexander Bich believes his knowledge of Bunn will help his fighter become victorious. “I know Leon Bunn from the amateurs,” said Bich. “He is certainly a good boxer, but on Saturday Leon Harth will prevail, there is no doubt.”

Legendary trainer Ulli Wegner has other ideas. “We want and must win, said Wegner, who celebrated his birthday earlier this week. “I am looking forward to the fight, but I am very sorry for Leon Harth’s team. I like his team and himself and he’s a good boxer, but it will definitely be a win for Leon Bunn, even if it’s going to be a close fight.”

Harth’s promoter, Alexander Petkovic shared his thoughts. “You are playing great football here in Frankfurt and I hope that Eintracht will win against Chelsea today, but on Saturday the city of Frankfurt and Team Sauerland will lose,” said Petkovic. “The IBF International title will be ours!”

Promoter Nisse Sauerland reflected on Team Sauerland’s last promotion in Frankfurt. “I like to remember the fight between Yoan Pablo Hernandez and Steve Cunningham, I expect a similarly great fight between Leon Bunn and Leon Harth,” said Sauerland. “I’m sure that Leon Bunn will win the fight and get his first title. the Fraport Arena will be a cauldron and boxing fans in Frankfurt can look forward to many more great fights!” 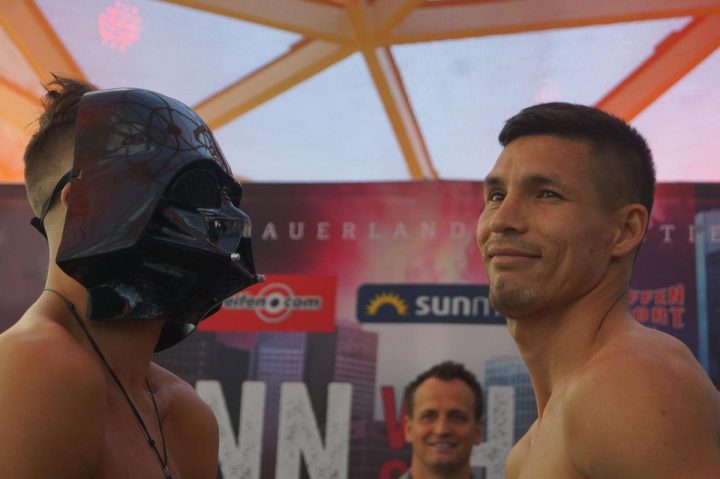 Anthony Yigit surprised fans by dressing as Darth Vader at the weigh-in today in Frankfurt ahead of his fight with Sandro Hernandez at the Fraport Arena.

The former World title challenger went undercover as the famous Star Wars villain, posing for pictures with unsuspecting spectators before taking to the scales and making weight for his eight-round super lightweight clash.

“Tomorrow is May 4th, Star Wars Day, so I wanted to do something fun to commemorate that,” explains Yigit. “I was in the crowd taking photos and challenging people to light sabre fights before my name was called. No one knew it was me so everyone was pretty shocked when I took off the mask.”

And after coming face-to-face with his opponent, ‘Darth Dig It’ had the following to say: “The force is strong with him, but not strong enough. He will feel the full power of the dark side when we meet in the ring tomorrow!”

Yigit fights on he undercard of the IBF International Light Heavyweight title clash between German rivals Leon Bunn and Leon Harth. All the action is available to watch live on Sport 1 in Germany and Viaplay in Sweden.

Kem Ljungquist (7-0, 5 KOs) is weighed in and ready for his eight-round heavyweight battle with Dominik Musil (3-1, 2 KOs) tomorrow night at the Fraport Arena in Frankfurt, available to watch live on Viaplay in Denmark.

The Danish heavyweight hope, who tipped the scales at 106.7 kg, is looking forward to testing his skills against Musil, who came in at 117.0 kg.

“I’m feeling good and I’m ready to go,” said Ljungquist, who returns to action following a first-round knockout win over Boldizsar Balazs Czagler at the Struer Energi Park on January 19. “I’ve been training hard and I can’t wait to fight.”

Having had the opportunity to size up his Czech opponent, Ljungquist believes Musil will provide a good test, and says fans can expect an exciting contest.

“He looks like a big guy,” he says. “He looks strong and looks likes he coming to win, but I’m coming for the win also, which should make an explosive fight.”

Bunn tops the bill in his hometown as Team Sauerland return to the Fraport Arena for the first time in seven years following a memorable cruiserweight showdown between Yoan Pablo Hernandez and Steve Cunningham in 2012.

The 26-year-old from Frankfurt is back in action after a unanimous points win over Viktor Polyakov on February 16 in Koblenz, and will have the chance to claim his first professional title as he goes toe-to-toe with countryman Harth.

“I would like to thank my promoter Team Sauerland for the opportunity and the confidence they’ve shown in me,” said the highly rated light heavyweight.

“To fight for my first title in my hometown is amazing! I’m looking forward to a great evening with a great atmosphere. Everyone knows that my fans support me everywhere I am boxing, but here in Frankfurt, it’s going to be even better!

“It’s time to step up. I want to climb the rankings and box for the big titles, and to do that I have to beat Leon Harth, even though I know he’s very strong.”

Having campaigned at cruiserweight, Harth has returned to light heavyweight, where he remains undefeated, and has captured the IBO Continental and WBC Asia 175lb titles in his last two contests.

The only blemishes on the Detmold-boxer’s resume come from defeats to former World Champions Murat Gassiev and Krzysztof Wlodarczyk, and World title challenger Artur Mann, who meets Kevin Lerena for the IBO crown on March 16.

“It’s great that my promoter Petko’s Box Promotion with Team Sauerland has been able to agree this fight,” said Harth. “Leon Bunn is a good boxer with a good amateur pedigree, but I have fought at a higher level. My switch from cruiserweight down to light heavyweight has also served me well. Here, I can play to my strengths much better, as Leon Bunn will find out on May 4.”

Harth’s promoter Alexander Petkovic adds: “We worked very well with Team Sauerland at last June’s Petko’s Fight Night, and the negotiations for this fight were just as simple, within 24 hours we were in agreement. This is exactly the type of fight we have to deliver for the German audience. We know that Leon Bunn is a strong boxer and his fans will support him in many ways, but our Leon will fight bravely and produce a big fight for all boxing fans, I promise!”

Promoter Nisse Sauerland says: “Leon Harth will provide a tough test for Leon Bunn, but if he wants to step up, he must be prepared to face tougher opponents, and Harth is a tough opponent. I am very happy that Harth and Petko’s Boxing Promotions have accepted this fight. We look forward to returning to Frankfurt for an action-packed evening of boxing, and we will be announcing some great fights for the undercard in the coming weeks!”

Limited tickets for the Team Sauerland show at the Fraport Arena in Frankfurt are still available via www.eventim.de