Berchelt vs. Vargas, Navarrete vs. Dogboe media quotes for Saturday 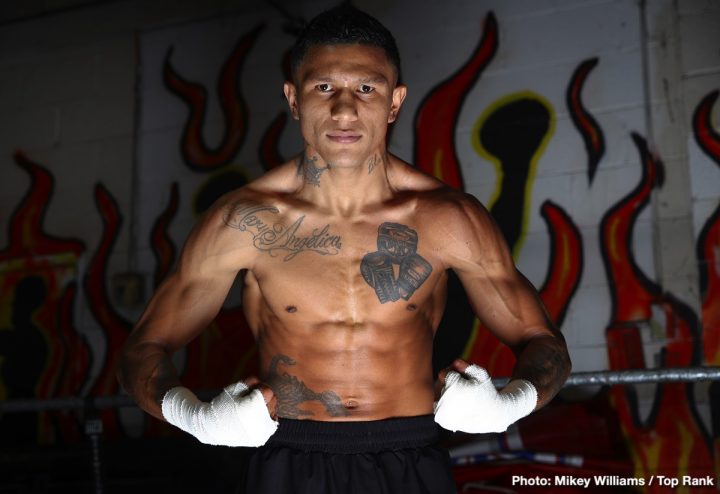 In the main event, WBC super featherweight world champion Miguel “El Alacran” Berchelt (35-1, 31 KOs) and Francisco “El Bandido” Vargas (25-1-2, 18 KOs) will look to repeat the thrills of their January 2017 match, won by Berchelt via 11th-round knockout. And, in the co-feature, Emanuel Navarrete (26-1, 22 KOs) will defend his WBO junior featherweight world title against Isaac Dogboe (20-1, 14 KOs), the man he defeated by unanimous decision to win the title back on Dec. 8.

After working out for the media Wednesday at Southwest Boxing Gym, this is what the fighters had to say.

“The people of Tucson and watching on ESPN are in for a great show. Vargas and I fought a great fight back in 2017, and our 2019 rematch will be no different. We are proud Mexican warriors who leave it all in the ring.”

“You will see the same ‘Alacran’ from the first fight with Vargas. I will enter the ring with a lot of desire to win and defend my title. I will defend this belt with everything that I have. This belt belongs to me.”

“The strategy is the same, which is to go out there to solve the problem that Vargas represents. I will leave it all in the ring. I will give all my heart to this battle.”

“Every time the ‘Alacran’ fights, it’s a guarantee that the fans will see a knockout.”

On a potential Lomachenko fight

“That is the fight we want. We want big challenges, without a doubt. I’d love to fight Lomachenko.”

“I’ve been patient. I’ve been waiting for this fight for two years and now it’s finally here. It’s going to be a war. I did a few different things in preparation for this fight. I worked on different strategies, but we’ll see how the fight goes. You know, when two Mexicans get into the ring, they leave everything behind. My goal is to reclaim the world title.”

On the first Dogboe fight

“It was a surreal moment when they announced me as the new champion. I was very happy to meet my goal, and now I am ready to defend the title successfully. It motivates me to know that the first fight was so good that everyone wants an immediate rematch.”

“This is a very attractive card. Many good fighters will be in action and you can’t ask for anything better than two world title rematches. I’m going to try and give the fans a big knockout win.”

“Navarrete couldn’t knock me out when I was at my worst, and now am I at my best. I am a much more fit boxer this time around, and it is my mission to become world champion once again. The ‘Royal Storm’ is back.”

“I have fought in Arizona before (first-round KO over Hidenori Otake in Glendale), and the fans there are tremendous. I know a lot of Mexican fans will be in attendance to see Navarrete, but I am coming for my title. He’s a nice guy and a great champion, but this is about redemption for me. I am ready to go to war.”

“I don’t see this as a distance fight. I am came coming for the knockout and to regain my title in spectacular fashion.”

Promoted by Top Rank, in association with Peltz Boxing Promotions and Golden Boy Promotions, tickets priced at $102, $77, $52 and $27 can be purchased at any Ticketmaster outlet, online at www.Ticketmaster.com, by phone at (800) 745-3000, or at the Tucson Convention Center ticket office.

Hearn: ‘If Ortiz wants Joshua next, he can have it’ »