Gaibnazarov vs. Fox Featured on Berchelt vs Vargas 2 Undercard 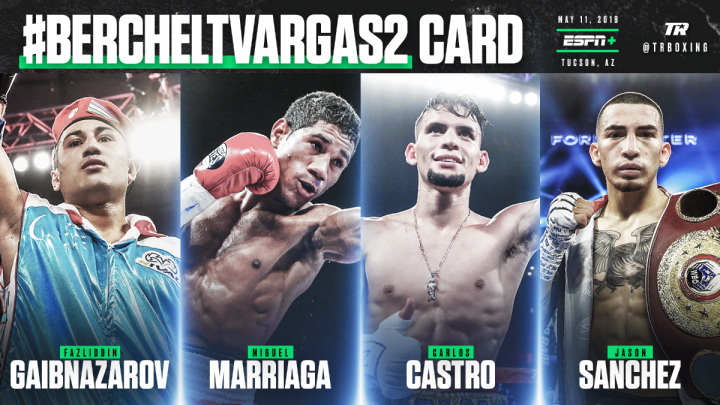 Fazliddin “Fayzi” Gaibnazarov is on the fast track to world title contention. Gaibnazarov, a 2016 Olympic gold medalist for his native Uzbekistan, will face the toughest — and tallest — test of his career against the 6-foot-3 Mykal “The Professor” Fox in a 10-round super lightweight showdown from the Tucson Arena. Fox will have a roughly nine-inch height advantage over Gaibnazarov.

The main card, dubbed “Twice as Nice,” will feature a pair of world championship rematches and will be televised live on ESPN and ESPN Deportes at 10 p.m. ET/7 p.m. ET. WBC super featherweight champion Miguel “El Alacrán” Berchelt will make the fifth defense of his belt against Francisco “El Bandido” Vargas in a rematch of their 2017 Fight of the Year contender, won by Berchelt via 11th-round knockout. In the co-feature, WBO junior featherweight champion Emanuel Navarrete will look to repeat the deed against Isaac “Royal Storm” Dogboe in a rematch of their Dec. 8 bout, won by Navarrete via unanimous decision.

Promoted by Top Rank, in association with Peltz Boxing Promotions and Golden Boy Promotions, tickets priced at $102, $77, $52 and $27 can be purchased at any Ticketmaster outlet, online at www.Ticketmaster.com, by phone at (800) 745-3000, or at the Tucson Convention Center ticket office.

“I want the best fighters at 140 pounds, and I want them soon,” Gaibnazarov said. “Fox is a step up for me, but I always rise to the occasion as my opposition gets better. I fought and beat the world’s best fighters as an amateur, and I will do the same as a professional. 2019 is going to be my year.”

“Most guys would take a step down in competition after a loss, but there is nothing to gain from that. Gaibnazorov is not to be taken lightly but neither am I,” Fox said. “I’m looking to secure a win and get back on the ball. An undefeated Olympian is a hell of a choice to try and do that with, but nothing ventured, nothing gained. Plus, the list of guys who will fight me, despite losing, is very short. I’m grateful and looking forward to doing battle with an Olympian.”

Gaibnazarov (7-0, 4 KOs) turned pro in 2017 following a storied amateur career that included a pair of Olympic berths, the gold medal in 2016 and victories over the likes of current promotional stablemate and WBC super lightweight champion Jose Ramirez. He turned pro in scheduled eight-rounders and has yet to be seriously challenged in the paid ranks. After going 3-0 in 2018, he made his 2019 debut on Jan. 19 in Verona, New York, stopping Ricardo Garcia in four rounds.

Fox (19-1, 5 KOs), a native of Forestville, Maryland, has befuddled most of his professional opponents with his long southpaw jab. In his last outing, Feb. 15 in Mulvane, Kansas, the upset-minded Fox was on the short end of a 10-round unanimous decision to top prospect Shohjahon Ergashev. Despite a pair of 98-92 scorecards, many ringside observers believed Fox did enough to earn a draw.

Tucson-based middleweight prospect Manny Guajardo (4-0, 0 KOs) will look to impress the hometown fans in a four-rounder against Jonathan Espino (2-3, 2 KOs).

Phoenix native Carlos Velasquez (1-0, 0 KOs) will face an opponent to be named in a four-rounder at lightweight.


« Mikey Garcia to fight in Aug. or Sep., mentions Prograis