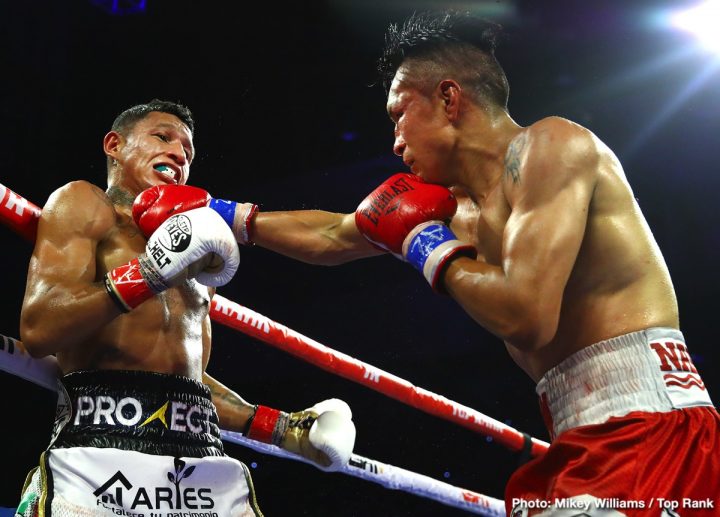 It was pure savagery in the desert. Miguel Berchelt defended his WBC super featherweight world title over Francisco Vargas after Vargas retired on his stool following the sixth round of a brawl in front of 4,424 fans at Tucson Arena.

“I did what I said I was going to do in the ring,” Berchelt said. “More importantly, I want to thank Francisco ‘Bandito’ Vargas. He’s a true Mexican warrior, and more than anything, let me tell you, he gave me my first opportunity at a world title. So, it was only fair that I would give him a shot to win his world title back. But his corner did the right thing in saving him from more punishment.”

“I want to prove that I’m the best 130-pounder in the world. In {two weeks}, it will be Jamel Herring taking on {WBO champion Masayuki} Ito. I want the winner of that fight because I don’t want to leave any doubt as to who the best super featherweight in the world is.”

Said Vargas: I am going to speak with my team, and we’ll see what happens in the future.”

Emanuel Navarrete did it again. The WBO junior bantamweight world champion defended his title against the man he beat five months prior, Isaac “Royal Storm” Dogboe, via 12th-round TKO. Navarrete won a unanimous decision versus Dogboe (20-2, 14 KOs) in their first meeting last Dec. 8 at Hulu Theater at Madison Square Garden, and the rematch was more of the same.

Navarrete (27-1, 23 KOs) scored knockdowns in the sixth and 12th rounds. Following the knockdown in the 12th, Dogboe’s father and trainer, Paul Dogboe, threw in the towel.

“It really surprised me that he took so many hard shots, but at the same time, he continued to throw strong punches,” Navarrete said. “I want to thank Dogboe because he gave me the opportunity to become a world champion, and now in this second fight, he gave me the opportunity to demonstrate that my first triumph wasn’t by accident and that there is a reason why I have the title. And to all the fighters at 122 pounds, I tell them that if they want my title, then they can come and try and take it. ‘El Vaquero’ is here!”

“It’s not over until the final bell. Hats off to Navarrete. He did a great job,” Dogboe said. “Making super bantamweight is getting too difficult. My next fight, I will be moving up to {featherweight}. I will be much more comfortable there.”

The CompuBox stats told the story of the bout. Navarrete landed 314 punches, 215 of which were power shots. Meanwhile, Dogboe landed only 121 of 523 punches.

Phoenix native Carlos Castro (23-0, 9 KOs) defended his WBC Continental Americas super bantamweight belt for the first time, outlasting the game Mario Diaz (18-3, 7 KOs) by scores of 100-89 2x and 98-91. Castro knocked down Diaz in the second round and kept him at bay with his 70-inch reach.

“We knew it was a tough fight, and that’s why we prepared so hard for this battle. But this is my title, and no one is going to take it from me,” Castro said My next step is to keep working hard and to move closer to a world title shot. I love fighting in front of my home state fans. The fans in Tucson are special.”

Marriaga scored a pair of knockdowns in the second round, while Cervera notched a flash knockdown of his own in the third. Marriaga’s body attack was too much, and Cervera elected to retire on his stool.

“He was a last-minute opponent that came a little heavier than what I’m used to fighting, and that’s why I focused on punishing the body,” Marriaga said. “He connected well with a solid punch and I went down, but he didn’t hurt me badly. My plan was to punish him with body shots until he did not want to continue and finally he didn’t come out to fight following the third round.”

Super lightweight prospect Miguel Parra (17-1-1, 12 KOs) made short work of David Morales (13-11,13 KOs), as Morales was unable to continue following the first round. Parra has now won eight fights in a row.