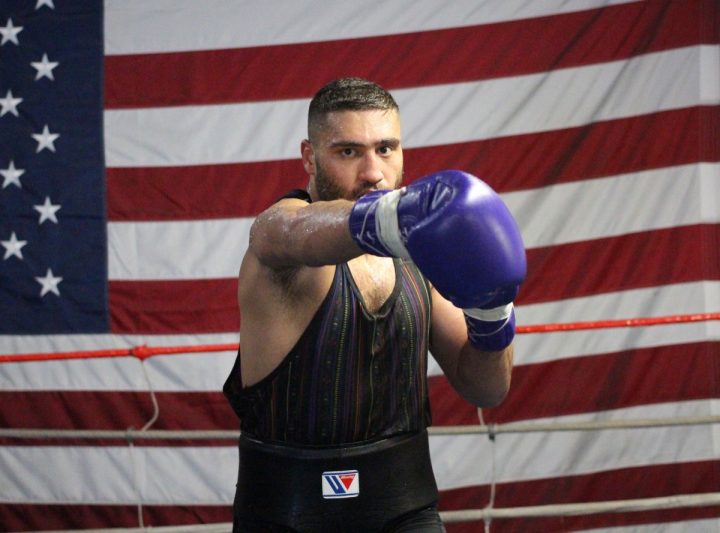 Light heavyweight brawler Ahmed Elbiali will return to the ring, and for the first time with new trainer Justin Gamber, when he faces Marlos Simões in a 10-round showdown as part of Premier Boxing Champions on FS1 and FOX Deportes action this Saturday night from Beau Rivage Resort Casino in Biloxi, Mississippi.

PBC on FS1 and FOX Deportes begins at 8 p.m. ET/5 p.m. PT and is headlined by former super welterweight champion Austin “No Doubt” Trout returning to the ring to take on former title challenger Terrell Gausha in a 10-round super welterweight battle.

Tickets for the event, which is promoted by TGB Promotions, are on sale now and can be purchased at the Beau Rivage Theatre box office and through Ticketmaster.

Elbiali has recently began working with a new trainer in Gamber, who also trains super middleweight champion Caleb Plant, and will look to show his improvement in the ring this Saturday night. Here is what he had to say about his new trainer and more:

On training with new coach Justin Gamber:
“I’ve been learning a lot since I started training with Justin Gamber, which was about six weeks ago. Nothing against my old trainers, I just felt I needed a new look. Justin and I work well together and I’ve improved tremendously. I’m learning how to relax more in the ring, which has helped me keep my power in the later rounds of sparring. Justin is a great coach and together we are going to make some noise in the light heavyweight division.”

On his recent training camp:
“I’ve put in a lot of hard work for this training camp and I can see the difference compared to other camps I’ve had in the past. I’m working on the fundamentals of boxing, using my jab more and setting up my combinations. I know I have the power to knock out my opponents, but now I’m learning more how to set it up. Living and training in Las Vegas has been a big boost to my career because the sparring out here is second to none. I’m having a great training camp.”

On his matchup with Marlos Simões:
“I know Simões is a durable opponent who’s only been stopped once in his career. I’m expecting him to be in great shape. He’s had a lot of success in the ring, so I’m preparing for a guy who can really fight. I’m just going to go in there and execute my game plan.”

On when he will be ready for a world title shot:
“I want to get as many fights as possible this year and make a world title run in 2020. Of course, everything is predicated fight to fight, but that is the goal.”

On making his televised return on FS1:
“Fighting on FS1 is always fun and exciting. FS1 is the platform where us fighters get the most exposure while we’re coming up. You can’t compare any other network to FOX, where the whole world can tune in. It’s truly a blessing for me to be fighting on FS1.”

Fans can live stream the fights on the FOX Sports app, available in English or Spanish through the FOX, FS1 or FOX Deportes feeds. The fights are available on desktop at FOXSports.com and through the app store, or connected devices including Apple TV, Android TV, Fire TV, Xbox One and Roku.


« Adam Kownacki vs. Chris Arreola in the works or Aug.3 at Barclays Center, Brooklyn, NY

Austin Trout vs. Terrell Gausha on FS1 & FOX Deportes on May 25 »