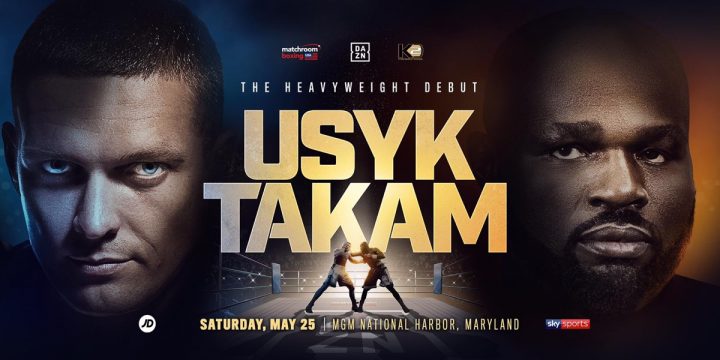 By Tim Royner: It’s now official that unified cruiserweight champion Oleksander Usyk (16-0, 12 KOs) will be making his first fight at heavyweight against 38-year-old former world title challenger Carlos Takam (36-5-1, 28 KOs) in a 10 round fight live on DAZN and Sky Sports at the MGM National Harbor in Oxon Hill, Maryland. This isn’t huge news that the fight is taking between the 32-year-old Usyk and the struggling Takam, as the match has been talked about for over a month.

The reactions from fans since then and today is mixed. While some boxing fans think this is a respectable match-up for Usyk in his first fight at heavyweight, many others point out that Takam has lost 2 out of his 3 fights, and was knocked out in the eighth round by high level journeyman Dereck Chisora last July. The fans have wondered why Matchroom Boxing promoter Eddie Hearn didn’t put Usyk in with the fighter that beat Takam recently in Chisora rather than picking him out. Takam is a respectable opponent for Usyk to fight in his first match, because it was only two years ago the Cameroon born heavyweight was knocked out in the 10th round by IBF/WBA champion Anthony Joshua on October 28, 2017 at the Principality Stadium, in Cardiff, Wales.

Usyk unified the cruiserweight division last year in beating IBF/WBA champion Murat Gassiev by a one-sided 12 round unnimous decision in the final of the World Boxing Super series cruiserweight tournament. Usyk came into the fight with the Russian Gassiev as the WBC/WBO champion. In beating Gassiev, Usyk captured the last two titles [IBF & WBA] not already in his possession to unify the division. Usyk now plans on unifying the heavyweight division quickly and then retiring from the sport as the unified champion. To unify the division, Usyk will need to beat IBF/WBA/WBO champion Joshua and WBC champion Deontay Wilder. In the best possible world, Usyk could have that goal accomplished by next year if he decides he wants to face Joshua as soon as possible. It won’t be hard for Usyk to get a fight against Joshua, since the two of them are both promoted by Eddie Hearn, but it’ll be more complicated to get the fight with Wilder setup. Wilder fights for Premier Boxing Champions on Showtime, and he’s going to want a 50-50 split against Usyk.

“May 25 marks a major moment in my career when I move to the Heavyweight division,” said Usyk. “At Cruiserweight I did it all and became the undisputed champion and that is my goal now in the Heavyweights.”

Usyk taking on a well known heavyweight with a lot of experience in Takam makes lineal champion Tyson Fury (27-0-1, 19 KOs) look bad in comparison in him facing little known German heavyweight Tom Schwarz (24-0, 16 KOs) on June 15 on ESPN at the Thomas & Mack Center in Las Vegas, Nevada. Although Schwarz, 24, is unbeaten and young, he’s not fought anyone nearly as good as Takam, who has been in with a number of tpo heavyweights during his career in results that haven’t always been good. Takam has wins over Michael Grant, Frans Botha, and Tony Thompson. Takam has been beaten by Chisora, Joshua, Alexander Povetkin, Joseph Parker and Gregory Tony. Takam has a controversial 10 round draw against Mike Perez in January 2014. A lot of boxing fans felt that Takam did enough to deserve a win in the Perez fight. He certainly outworked a demotivated looking Perez in that fight. Takam has pretty much only been beaten by the best. Chisora obviously one of the best, but Takam was beating him when he got caught in eighth round, and dropped twice by the heavyweight British fighter. At the time the fight was stopped, Takam looked to be ahead. In Takam’s last fight, he bounced back from his previous loss in beating Senad Gashi by a seventh round knockout on December 22 at the O2 Arena in London, England.

Usyk is moving up in weight at an odd time in his career. Just when he’s unified the cruiserweight, he could stay there and dominate the division for a long time to come if he wanted to. Although Usyk isn’t spelling out why he wants to move up to heavyweight, it’s pretty clear that it’s a move being done for the purpose of money. There’s good money Usyk can make it he moves up to heavyweight and beats Joshua. Even if Usyk doesn’t beat Joshua. He can still make a lot of money fighting him once or twice. Hearn will likely put Usyk and Joshua in with each other at least twice. The fan interest will be enough for Hearn to want to match them two times if not three times.

It’s a smart move on Hearn’s part in moving the Usyk vs. Takam fight to May 25 rather than putting the fight a week earlier on May 18, which is the same date Deontay Wilder will be defending against Dominic Breazeale in New York. Also on the May 18 date, former WBO middleweight champion Billy Joe Saunders will be fighting Shefat Isufi, IBF welterweight champion Ivan Baranchyk will be fighting Josh Taylor in the World Boxing Super Series 140 lb tournament, and IBF bantamweight champion Emanuel Rodriguez will be fighting Naoya Inoue in the WBSS bantamweight tournament. There’s too many other fights taking place on May 18 for Hearn to have risked putting Usyk against Takam on that date.

“This is the ultimate challenge and it begins on May 25 against Carlos Takam. It’s a tough first fight but I need to test myself against World class opposition on my new road to undisputed,” Usyk said.

It’s going to be tough for Usyk to make the leap up against the bigger fighters at heavyweight. The weight limit for cruiserweight is 200 lbs. Usyk looks like he’s been rehydrating to around 215 lbs for his cruiserweight fights. Takam weights in between 245 and 254 for his fights at heavyweight. Even if Usyk bulks up a little, he’s still going to be greatly out-sized by Takam. Usyk didn’t look that great in beating 2016 Olympic super heavyweight silver medalist Joe Joyce when the two competed in the World Series of Boxing in 2012/2013.


« Oleksandr Usyk – Carlos Takam on May 25 LIVE on DAZN