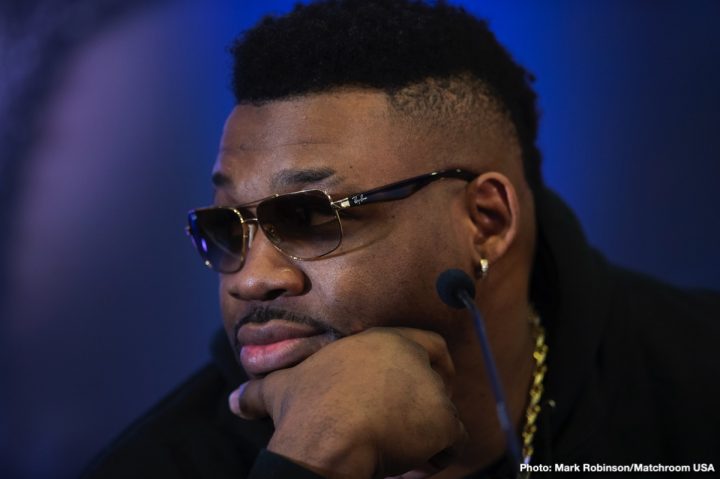 The Joshua vs. Miller fight was scheduled to take place on June 1 on DAZN and Sky Sports Box Office from Madison Square Garden in New York. The positive test for Miller, and his subsequent denial of a boxing license by the New York State Athletic Commission has sidelined him. Joshua’s promoter Eddie Hearn is actively looking for a replacement opponent for AJ to fight on June 1.

Miller (30-0-1, 23 KOs) says he will be “appealing” the New York’s Commission decision to deny him his license to fight in the States. Miller, 30, says he’s worked too hard during the last 15 years for him to give up and have his dream taken from him. He further says he doesn’t banned substances.

What may ultimately hurt or help Miller’s case is the B-sample that was taken by Voluntary Anti-Doping Association (VADA) during their random March 20th urine test. If that turns out to be negative for the banned substance GW1516

Here’s Miller’s response on his Instagram site to the New York State Athletic Commission denying him his boxing license:

“I want to thank all of my supporters who have stood by me since day one and especially during this extremely difficult time.

I have not been tuned in to social media and any other media outlets to focus and channel all of my energies into working hard with no distractions.

I am absolutely devastated upon hearing the news my boxing license has been revoked in NY State and I will be vigorously appealing this decision. I have NEVER knowingly taken any banned substance and when I found out the news last night I was totally shocked.

My team and I stand for integrity, decency & honesty and together we will stand to fight this with everything we have! This was a voluntarily test that I was very happy to do and these results came just one week after another voluntarily test that I had taken which was completely clean. I refuse to just lie down and let my dream be taken away from me when I know in my heart that I’ve done nothing wrong.

Remember don’t believe everything you hear and see. The facts will prevail and I shall be vindicate. I don’t have anything to hide and the truth will make itself known.”

It’s likely going come down to Miller’s B-sample for the test. If doesn’t show an adverse finding for the banned GW1516 substance, then he reapply with the New York State Athletic Commission to get his boxing license. It’s not common for the B-sample to come up negative when the A-sample has tested positive. It’s not likely to happen.

Obviously time of the essence. Unless this is done quickly, Hearn will select another opponent for Joshua, and that fight will be the one goes ahead for June 1 at Madison Square Garden in New York. Never the less, Hearn is rapidly closing in on a replacement opponent for Joshua (22-0, 21 KOs) to fight on the 1st of June, and he says he’ll be ready to make an announcement in early next week. As long as VADA can analyze Miller’s B-sample and release the results of the test this week, he might have a good shot at still getting the fight with Joshua, if his sample comes up negative for GW1516. If it’s positive for the substance, then that would put Miller in a bad position to get the fight with IBF/WBA/WBO heavyweight champion Joshua. Miller would likely need to come up with an explanation for how the substance turned up in his system.

“The New York State Athletic Commission has denied Jarrell Miller’s professional boxing license application for a violation relating to the use of a prohibited substance. We have no further comment at this time,” the commission said on Wednesday via ESPN.com.

Hearn is looking to find a replacement fighter that is popular enough to please DAZN, Sky Sports and Madison Square Garden, which is hosting Joshua’s June 1 fight. It’s not going to be easy to do with the names that Hearn has mentioned as options. These are the names that Hearn has mentioned: Manuel Charr, Luis Ortiz, Agit Kabayel, Adam Kownacki, Michael Hunter, and Joseph Parker.

“There are some names that would appeal to our partners — DAZN, Sky Sports and Madison Square Garden — more than others and it’s our job to get the ones that appeal most,” Hearn said to ESPN.com.

Hearn says he and Joshua both want former world title challenger Luis “King Kong” Ortiz (31-1, 26 KOs) to be the one that replaces Miller on June 1. The Cuban southpaw Ortiz, 40, is well known with the hardcore boxing fans in the U.S. However, he’s talented, dangerous and someone that came close to beating WBC champion Deontay “Bronze Bomber” Wilder a year ago in their fight in March 2018. Hearn has had the chance to fight use Ortiz in the past for Joshua and his other star heavyweight Dillian “The Body Snatcher” Whyte (25-1, 18 KOs), but he’s always rejected him and gone with arguably safer choices for his Matchroom fighters. However, Hearn needs to keep DAZN, Sky Sports and Madison Square Garden happy by picking a name that will appeal to all of them as the replacement for Joshua to fight. It’s no good if Hearn selects a soft touch for Joshua to bowl over on June if it’s someone that won’t bring in ratings or the ticket buyers.

Ortiz’s management think it’s too short notice for him to step in to take the fight with Joshua. It’s possible that Hearn might be able to persuade them to take the fight if he makes it worthwhile financially with a nice purse split. Hearn might not want to do that though, because this is a voluntary defense for Joshua, and not a unification match against Wilder.

Hearn says there will be 10,000+ British boxing fans that will be flying to the U.S to see Joshua fight on June 1.

Hearn lists these heavyweights as the possible fighters that could step in to fight Joshua on short notice on June 1st: Michael Hunter, Kubrat Pulev, Oscar Rivas, Adam Kownacki and Manuel Charr. Pulev is suspended, so he’s not an option. Kownacki is said to have rejected the fight. Hunter (16-1, 11 KOs) recently signed with Hearn, and fought for the U.S in the 2012 Olympics. If Hunter were from the UK, he would likely be a big name. In the U.S, Hunter isn’t well known. He’s very light for a heavyweight at just 213 lbs, and looks more like an overweight cruiserweight. It’s the perfect showcase opponent for Joshua to blast out and look good against. If the idea is to sign someone that will make Joshua look good, then Hunter is the guy. He’s not likely to bring in U.S boxing fans to want to watch Joshua fight live at Madison Square Garden or subscribe to DAZN to see him. Hearn needs a bigger name than Hunter to bring in the U.S fans.

Hearn stresses that this is the “Anthony Joshua show,” could be code for the fans are coming to see him fight regardless of who shares the ring with him in this fight.