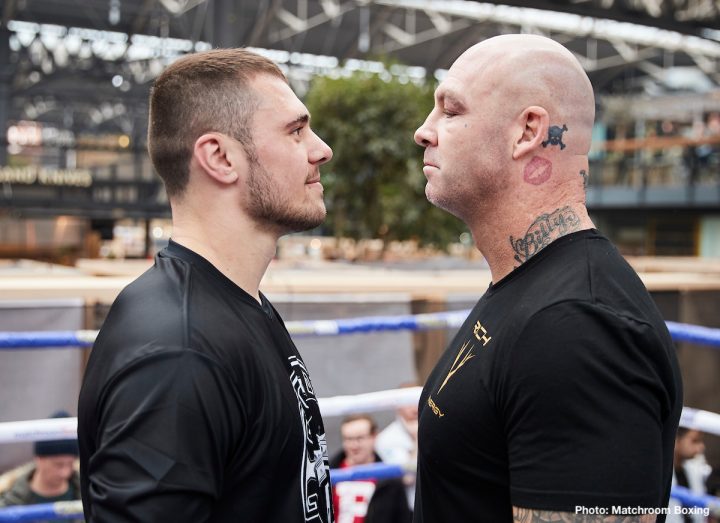 By Trevor McIntyre: Former WBA heavyweight champion Lucas “Big Daddy” Browne and domestic level fighter David Allen have a lot on the line for their 12 round scrap this Saturday night on DAZN and Sky Sports at the O2 Arena in London, England. Both guys need wins to stay in the hunt for bigger fights.

There’s no dislike involved between the two guys. They’re both looking to get the ‘W’ in a professional way without a whole lot of trash talking in order to take their respective careers to the next level. With former World Boxing Association heavyweight champion Browne (28-1, 24 KOs) being 40-years-old, it’s important that he get the win, as this could be the last hance saloon for him. It’s not as big of a deal for the 26-year-old Allen (16-4-2, 13 KOs) though, as he’s got time to rebuild his career if he loses. Additionally, Allen is promoted by Eddie Hearn of Matchroom, so he’s going to keep getting chances for fights even if he loses. Moreover, Allen has heavy hands, he throws a lot of punches, and makes it exciting. Browne has power too, but he’s slow, has a lot work rate, and as this writer already mentioned, he’s old.

Browne was recently stopped in the sixth round by #1 WBC Dillian Whyte last year in March 2018. Browne has won his last three fights against lower level opposition. Browne’s last win over journeyman Kamil Sokolowski was a controversial six round points decision. It looked like Browne lost the fight, but the referee scored it for him by a 57-56 score. Boxing News 24 had Sokolowski winning the fight by a five rounds to one score. Browne was knocked down by a big left hook from Sokolowski in the second round. Never the less, the fact Browne is struggling with journeymen at this point in his career shows where he’s at. The lack of hand speed for Browne was troubling. He looked glacially slow in getting beaten to the punch all night by Sokolowski.

“Even though there’s no animosity in the build-up, I want to punch him all over The O2. I’ve trained harder than ever for this fight and you’ll all see the difference come fight night. I’m going to knock him out,” Allen said. “A win here puts me on the big stage, not the highest level, but within touching distance of a fight that would then put me there.”

The first and the last quality victory Browne has recorded in his career was a big 10th round knockout victory over WBA ‘regular’ heavyweight champion Ruslan Chagaev in March 2016. Browne was getting his head boxed off going into the 10th round. Browne unleashed a series of heavy shots that put Chagaev down. Browne’s career has gone nowhere since his big win over Chagaev. Browne has fought five times since then, losing to Whyte, and beating four lower level heavyweights. Saturday’s fight against Allen will be another contest for Browne against a lower level guy. In this case, Allen is a real threat to Browne due to how slow and shot the 40-year-old Australian is starting to look.

“I don’t think he’s ever going to be a world champion but he’s definitely a great fighter,” Browne said. “If you put him up against anyone else in Australia, I think he beats them. He’s got a chin like a brick so it’s going to be a long night for me. I’m not going to bowl him over in one round but I’m prepared for all scenarios. We’re going to knock lumps off each other.”

Allen has won his last three fights since losing to 2016 Olympic super heavyweight gold medalist Tony Yoka by a 10th round knockout last June in Paris, France. That was a total mismatch. Even though Yoka looks like a poor heavyweight compared to how he performed in the Olympics, he worked Allen over in beating hi with volume punching until stopping him with a flurry of shots in the 10th. Since that loss, Allen has beaten Nick Webb, Ariel Esteban Bracamonte and Smir Nebo, all by knockouts. Hearn is pretty excited at the progress that Allen has made, because he’s a crowd-pleaser and he’d like to take advantage of that by putting him in steadily bigger fights. If Allen can get a top 15 ranking, it’s easy to see a scenario where Hearn sets him up with a title shot against IBF/WBA/WBO heavyweight champion Anthony Joshua in the future. Allen could make some life-changing money and set himself up for life if he can keep winning long enough for Hearn to give him that opportunity.

As bad as Browne has looked lately, you’d have to pick Allen winning this fight just based on his youth. Allen’s punching power, and his attacking style of fighting is going to give Browne fits, as he really labors when he’s forced to fight at a fast pace. Allen is going to be forcing the action on Browne all night long. It wont be surprising if Browne boils over, and is taken out from being exhausted.

Allen isn’t the most talented heavyweight, but he’s got enough for him to beat the brakes off an old timer like Browne. This should be entertaining from start to finish. If Allen can KO Browne in six rounds like Dillian Whyte did last year, he’d be making a statement. A loss for Browne against Allen would be a sure sign that it’s time for “Big Daddy” to hang up his gloves. Whether he does or not is unclear. It depends on the paydays that are available to an aging fighter like him.

Allen is going to push the fight against the 250+ lb Browne, and force him to work harder than his body can handle. Once Browne gasses out by the fourth or fifth round, Allen will pound him until the referee is forced to step in and stop the contest. It won’t be pretty.

Also on the Allen vs. Browne DAZN card this Saturday night are the following fights: