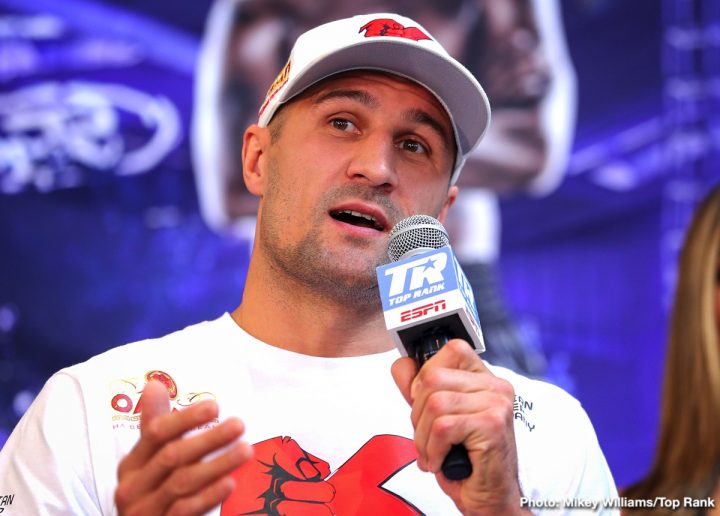 By Chris Williams: The purse bid for WBO light heavyweight champion Sergey Kovalev’s title defense against mandatory challenger Anthony Yarde has been moved from next Monday, April 8 to April 15. The purse bid being moved was done at the request of Kovalev’s promoter Kathy Duva of Main Events.

This has to be seen as a positive that the purse bid was postponed. It means the management of the two sides are trying to hammer out a deal get the fight done.

A lot of boxing fans see this as ultimately a hopeless endeavor on the part of Kovalev’s promoter Duva, because they believe that Yarde and his management don’t seriously want the title shot due to the high probability of it going badly for them. The inexperience that Yarde, 27, has is shocking for someone ranked #1 by the World Boxing Organization. Yarde has been fighting dreadful opposition since he turned pro in 2015, and he’s clearly not ready to be fighting any of the world champions at 175.

You can argue that Yarde isn’t ready to fight even a bottom 15 contender at this point, let alone a world champion like Kovalev. If Yarde and/or his team want out of the fight, they sabotage the negotiations quite easily in a number of ways, one of which would be to insist the fight take place in the UK. Kovalev, 35, isn’t able to give Yarde home advantage as the challenger. Kovalev’s management want the fight to take place in Russia, and if they win the purse big on April 15th, then he’ll have a good chance of making that a reality. Of course, Yarde could then pull out of the negotiations and refuse to fight Kovalev. If Yarde does that, then he’ll lose his #1 ranking with the WBO, and who knows how long it’ll take for him to get pushed back to the top. Yarde can obviously get ranked quickly by fighting high caliber contenders light Callum Johnson, Marcus Browne, Sullivan Barrera and Badou Jack. It’s unlikely that Yarde would risk his perfect record against any of those fighters.

If Yarde ducks the fight and takes off without facing Kovalev, then the WBO will need to come up with another mandatory for him to fight. The next highest rated contender in the WBO’s top 15 is #2 Dominic Boesel. He’d arguably be better option for Kovalev to fight. It might be a more competitive fight.