Khan: I was still in the Crawford fight 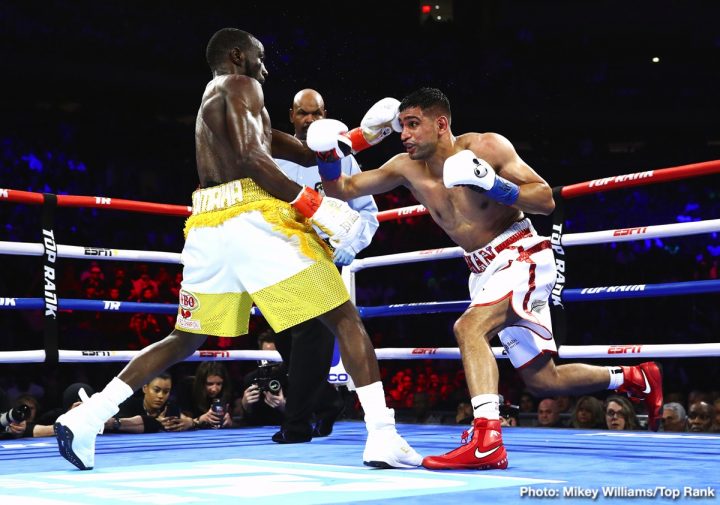 By Charles Brun: Amir Khan says he was still competitive in the sixth round of his fight against WBO welterweight champion up to the point the match was stopped by the request of his trainer Vigil Hunter after he was hit with a low blow last Saurday night at Madison Square Garden in New York.

Aside from his first round knockdown by Crawford, Khan (33-5, 20 KOs) insists that he was still very much involved in the fight, and that he wasn’t taking a lot of punishment. Khan’s faced looked marked afterwards, but wasn’t swollen and cut up the way fighters are when they’ve taken a beating.

There seems to have been some confusion between the conversation had with his trainer Hunter after Khan was hit with a low blow. Hunter thought Khan was saying that he was incapacitated from the shot, but it that’s not what he was trying to tell him. Khan was just answering a question by Hunter how he felt, and he wasn’t telling him that he couldn’t continue. It sounds like Hunter didn’t understand what Khan was telling him, so he reacted the way a trainer normally would react if he thought his fighter was too hurt to continue.

“Apart from the one knock-down, I thought I was in the fight. It wasn’t really a brutal fight. I didn’t take that much punishment,” Khan said to the Independent.

After the fight, Khan said he was peeing blood. It’s unclear that’s from him being hit in the groin or perhaps in the kidney area from Crawford’s body shots.

Khan was still fighting well in the fifth and sixth round. Crawford had shot off a lot of his fireworks in the first rounds. Whether he was starting to tire or whether Khan was starting to come on is unclear. Khan was doing well in the fifth and sixth round. The question that some have is whether Crawford, out of frustration of suddenly finding himself in a fight, decided to hit Khan with a low blow to gain an edge in the sixth. You have to realize that Crawford, who is kind of a hot-heated fighter to begin with, was having it his own way in the first four rounds. But when all of a sudden Crawford started getting hit back in the fifth, he didn’t look like a happy camper. If this was a game of chess, Crawford was starting to feel the heat and he didn’t like it when Khan started making a move towards his King. Did Crawford lose his cool and hit Khan with a low blow out of frustration at things no longer going his way? We don’t know. The timing of Crawford’s punch accuracy disappearing in the sixth just when Khan starting to do well looks fishy to some. Things were no longer going Crawford’s way. Out of nowhere, Khan gets hit by a low blow. Some would argue that Crawford lost his cool.

Khan says he’s still going to have opportunities with his career despite his stoppage loss to Crawford.

“I will always have world title fights. I will always have opportunities to fight for world titles, so yeah, I think that will always be there,” Khan said. “One thing about America, I’ll always get opportunities here because I train here and there are many fights out there for me. There are rematches with [Danny] Garcia, people will still want to see me fight people like [Keith] Thurman and [Manny] Pacquiao. But definitely, man, you’ll definitely see me again.”

It’s a good idea for Khan to make sure he gets on the same page with Virgil if he plans on working with his trainer in the future. If Hunter is going to misinterpret what Khan is saying each time something like this happens with low blows or some kind of ache and pain he’s feeling, he might continue to halt his fights in the future. Khan needs to let Hunter know that if he wants out of a fight, he’ll tell him ‘I want the fight stopped.’ That didn’t happen last Saturday.

“I want to come home and then decide what I do next,” Khan said.

Khan can probably still get big fights, but not against any of the elite level welterweights with Premier Boxing Champions. Adrien Broner or Adrian Granados would be good options for Khan. It’s unlikely Danny Garcia, Shawn Porter, Keith Thurman, or Errol Spence would fight him. It would depend though. If Danny Garcia or Mikey Garcia don’t have an opponent for their next fight, they might look Khan’s way. If Khan doesn’t mind facing either of those two fighters, it’s possible he could get a big fight later this year. Broner is doing poorly with his career as of late, but a fight between him and Khan would be an interesting one.