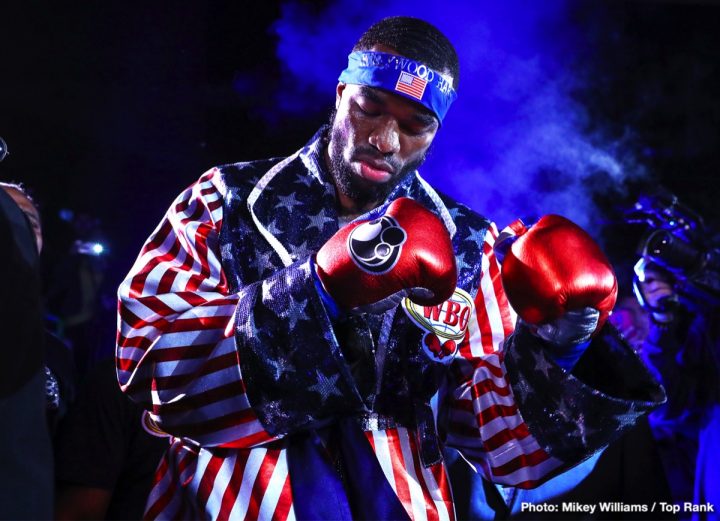 “It’s official,” Hart said about him fighting on june 15 against the recently beaten 35-year-old Eleider.

Dan Rafael of ESPN had this to say about the Hart vs. Alvarez fight on his social media site:

“Talked to @1hollywoodHart today and he said he is moving up to light heavyweight to fight former world titlist Storm Alvarez on June 15 on the Tyson Fury card on ESPN+ on June 15. Nice fight! #boxing.”

Thus far, Hart vs. Alvarez is the only fight on the undercard for the Fury vs. Schwarz card on ESPN+. That’s obviously going to change as the fight draws nearer. Top Rank will likely stack the card with some talented fighters to entice the casual and hardcore boxing fan to want to sign up for the ESPN+ app to see the fight.

With Fury being an unknown to casual fans, and and his opponent Scharz, who comes from Germany, also an not a recognizable name, it’s important that Top Rank adds some talented fighters on the undercard.

Hart, 29, is coming off of a close 12 round majority decision to WBO super middleweight champion Gilberto “Zurdo” Ramirez on December 14 in Corpus Christi, Texas. Hart hurt Ramirez during the fight a couple of times, but he wasn’t able to keep up with his high work rate.

Hart, the son of former middleweight contender Eugene “Cyclone” Hart, had a good amateur career before turning pro in 2012. He’s fought his entire seven year pro career at super middleweight, and has done well with the exception of his two losses to Gilberto Ramirez. The only other negative about the Top Rank promoted Hart is he never mixed it up with the other talented super middleweights.

Basically the majority of the top fighters in the 168 lb. were somehow bypassed by Top Rank when they went about matching both Hart and Ramirez. The politics of boxing were likely the main reason for a lot of those fights not happening, but it’s also likely that Top Rank didn’t want Hart and Ramirez to be put in situations where they might lose. There’s some fighters on that list that would have had a good chance of beating Hart and Ramirez had Top Rank made those fights.

Ramirez, 27, recently made his debut at 175 in beating former world title challenger Tommy Karpency last Friday night in a fourth round knockout win.

Hart will likely make his decision whether to stay at 175 or move back down based on how well he does against Eleider Alvarez on June 15. If he can beat Alvarez, he’ll probably remain in the division. Former WBO light heavyweight champion Eleider tasted defeat for the first time in his 0-year pro career on February 2 in losing a 12 round unanimous decision to Sergey Kovalev in their rematch in Frisco, Texas. Alvarez had knocked out Kovalev in the seventh round in their first fight in August of last year in Las Vegas, Nevada.

If Hart can beat a still talented light heavyweight like Eleider, it means he’s got the talent to mix it up with the best fighters in the 175 lb division. Unlike at 168, Top Rank is well represented with talented fighters at 175 in IBF champion Artur Beterbiev, WBC champ Oleksandr Gvozdyk and WBO champion Kovalev. All those fights would be available to Hart. Whether he could beat any of them remains the big question. Hart, 6’3″, has the height and power to be a major player at light heavyweight, but the only question is whether he can handle the big shots from the guys in this weight class.

It’s going to be tough for Jesse Hart to get passed Eleider on June 15. That’s an advanced fighter for Hart to be taking on in his first fight at 175. You can arguably say that Hart has already been competing against light heavyweights in his two fights with Gilberto, who tends to rehydrate a ton. For example, Ramirez rehydrated to 196 lbs for his fight against Karpency last Friday night. That’s not weight that Ramirez just recently packed on. He’s always been very big after he would make weight for his fights at 168. Hart held his own in his two fights against Ramirez, and almost beat him.

It’s too bad Hart vs. Alvarez will be on June 15. It’s a bad date for that fight due to the other fights that are taking place that night between Josh Warrington and Kid Galahad, and possibly the World Boxing Super Series cruiserweight tournament semifinal. Being on the Fury vs. Schwarz card is bad enough, but then you factor in that it’s on ESPN+ and on a date with a lot of competition, it’s bad news for Alvarez-Hart.