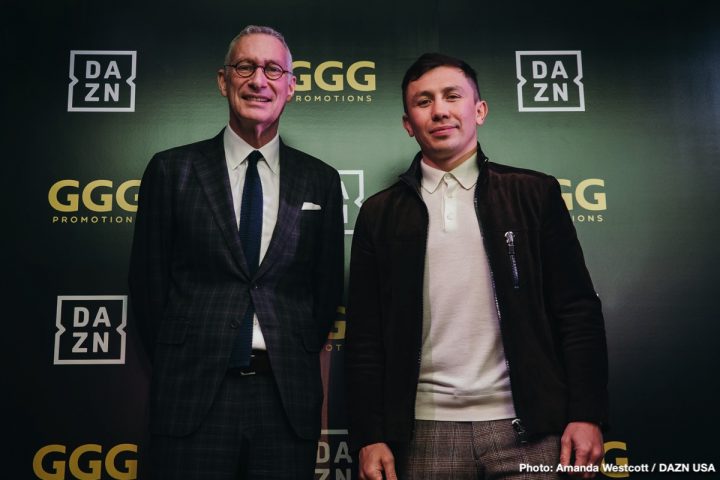 By Allan Fox: It’s now official that former middleweight champion Gennady ‘GGG’ Golovkin (38-1-1, 34 KOs) will be facing unbeaten Canadian Steve Rolls (19-0, 10 KOs) in a 12 round fight in GGG’s first fight of his six-fight contract with DAZN on June 8 at Madison Square Garden in New York.

GGG has been out of the ring since last September. So by the time he fights Rolls in two months from now on June 8, he’ll have been inactive for nine months. The grueling nature of Golovkin’s last fight against Saul Canelo Alvarez last September makes his long time off from the ring a positive thing for the Kazakh. Golovkin’s opponent Rolls shouldn’t give him any problems. It’ll be surprising if Rolls is able to make it to the third round. It’ll depend on how hard Golovkin shoots for a knockout.

It would be a good idea for Golovkin to let Rolls hang around for a while so that he can get the rust out, and work on some things that he can use when/if he get a third fight with Canelo Alvarez. The Mexican star said recently that he would be interested in fighting GGG again IF he brings a world title to their trilogy fight. If not, then Canelo said he might look in a different direction. This week, Canelo reiterated that he’s seriously interested in moving up to light heavyweight to face WBO champion Sergey Kovalev. That would be a big fight for Canelo if takes that one in September instead of GGG. Canelo is fighting next month on May 4 against IBF middleweight champion Daniel Jacobs (35-2, 29 KOs) on DAZN at the T-Mobile Arena in Las Vegas, Nevada.

“I am very excited to be returning to the ring and bringing the Big Drama Show back to Madison Square Garden,” Golovkin said in talking about his return to MSG for his fight against Rolls. “The Garden’s fans are fantastic. I love boxing and I promise to bring the best of me to everyone who will be watching me in an all-action fight with Steve Rolls. I am very happy that GGG Promotions has a new home at DAZN.”

Rolls is a slugger, so the fight should have action from start to finish. That’s one thing good about the choice of opponent for Golovkin. He won’t have to go looking for Rolls, because the Canadian will be right there in front of him the entire night.

Once Golovkin gets passed Rolls on June 8, his next fight will likely be against Canelo Alvarez in September. Yeah, Canelo said he wants Golovkin to have a title in his possession in order to make a third fight between them worthwhile, but the reality is Canelo just signed a huge 11-fight, five-year, $365 million contract with the streaming giant DAZN. The company is going to likely want Canelo and GGG to face each other to bring in money/subscribers. Golovkin recently signed a three-year, six-fight, nine-figure contract with DAZN. There are rumors that Golovkin will receive $15 million for his fight against Rolls. That’s a lot of money for what is all intents and purposes a mismatch. DAZN likely gave GGG and his management the green light for an easy fight with his first match with the streaming giant. But after this gimme against Rolls, Golovkin will likely need to start earning his big contract money by fighting lions like Canelo, Jacobs, Demetrius Andrade and Jermall Charlo.

Unlike the Golovkin-Rolls fight, there’s a lot of interest from boxing fans in seeing Canelo face Jacobs in their unification contest. That’s what makes Golovkin’s choice of opponent for his June 8 fight on DAZN look so incredibly bad. Canelo is risking life and limb facing a very tough guy in Jacobs, whereas Golovkin is arguably facing soft job in 35-year-old Rolls. It makes Golovkin look REALLY bad in fighting a guy like that. The timing for this type of a fight is a bad one for Golovkin. Someone like Rolls would be fine if Golovkin had just beaten Canelo, but not after losing to him. It looks like Golovkin is going downhill in fighting this type of opponent. Canelo’s fight next month against Jacobs is his next match since his win over Golovkin. In contrast, Golovkin will be taking his first fight back since his loss to Canelo when he faces Rolls on June 8. The opponent for Golovkin is all wrong, and of course the date is late, very late.

Golovkin always brings in large crowds when fighting at Madison Square Garden. The venue for the fight is ideal. The opponent, however, leaves a lot to be desired. It’s unclear whether this was all Golovkin’s management could get for him or if this is the kind of opponent that they wanted for him. Golovkin lost his last fight to Saul Canelo Alvarez by a 12 round majority decision last September, and took a lot of heavy blows in the fight. This was the second time that GGG had fought Canelo and failed to beat him. In Golovkin’s last three fights, his record is 1-1-1. With a record like that, it’s a good idea that GGG get a sure thing win against weaker opponent. So in that respect, Rolls is perfect, even though he’s someone that fans have little interest in seeing. Golovkin’s management are banking on fans wanting to see him fight, period. The opponent could be a cardboard prop, and boxing fans would still want to see him fight. Rolls is so over his head in this fight that it might as well be a prop. A fight like this scream mismatch. It’s too bad it’s not an exhibition. It wouldn’t be as bad.

News of Golovkin’s June 8 opponent, 35-year-old Rolls, was leaked earlier on Tuesday. The reaction to the fight was underwhelming to say the least. Indeed, a lot of boxing fans are totally turned off by the choice of Rolls. They expected much better from Golovkin, at least someone like Hassan N’Dam, Rob Brand, Maciej Sulecki or Sergiy Derevyanchenko. Rolls is undefeated, but he’s pretty old at 35, and that’s a ripe age for someone that has never fought anyone of note during his career. The best fighter on Roll’s eight-year pro resume is journeyman KeAndrae Leatherwood (21-6-1, 13 KOs). Rolls easily beat Leatherwood by a one-sided 10 round unanimous decision last December, but he wasn’t as impressive as other guys that have beaten the same fighter.

This will be Rolls’ first fight at Madison Square Garden. Rolls has been fighting in Canada. He’s ranked #9 with the International Boxing Federation, but not with any of the other sanctioning bodies unfortunately. Rolls recently won the vacant USBA middleweight title in beating KeAndrae Leatherwood. Rolls has a lot of knockouts on his resume, but they’ve come against that aren’t world class fighters. That’s the main problem that boxing fans have with Rolls. He has a nice looking 19-0 record, but he’s not beaten anyone good during his career. However, the casual boxing fans will likely be impressed with GGG fighting a guy with a 19-0 record, so they won’t be bothered that he’s arguably being matched a fluff opponent instead of someone with talent.