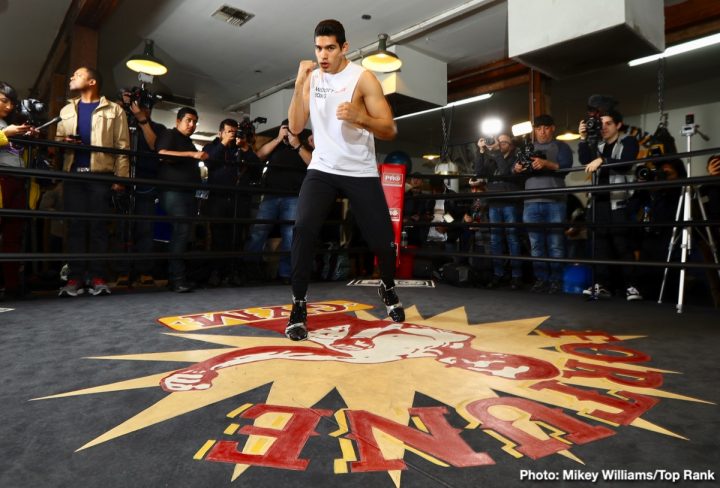 By Mark Eisner: WBO super middleweight champion Gilberto “Zurdo” Ramirez (39-0, 25 KOs) says his goal is to unify the titles at 168 and see if he has a chance of making big things happen at 175. In other words, Ramirez doesn’t sound he’s made up his mind about giving up his 168 lb title, like contender Billy Joe Saunders was hoping he would do.

Ramirez will be taking a test fight in eight days from now on April 12 against southpaw former light heavyweight world title challenger Tommy Karpency (29-6-1, 18 KOs) on the undercard of Vasiliy Lomachenko vs. Anthony Crolla on ESPN+ at the Staples Center in Los Angeles, California. The streaming portion of the card begins at 11:00 p.m. ET/8:00 p.m. PT. Also on the card is unbeaten light welterweight Arnold Barboza Jr. (20-0, 7 KOs) fighting former WBO light welterweight champion Mike Alvarado (40-4, 28 KOs) in a 10 round fight.

“I’m looking forward to getting into the ring this April 12 for the fans to enjoy my performance,” Ramirez said to ESPN. “I’ll be in my best condition and I want to give them a big fight, if everything goes well, we’ll try to unify titles in 168 or we’ll see if we’re given an opportunity at 175 pounds. I want to be in the ranking of the best pound for pound,” Ramirez said.

This should be a good test for Ramirez to fight the southpaw Karpency. The 33-year-old Pennsylvania native put Oleksander Gvozdyk on the canvas in the first round of their fight in July 2016, and landed some big shots on him in the second round as well that had him looking hurt. Gvozdyk did a good job of making adjustments to come back and stop Karpency in the sixth round, but the fight showed how good the southpaw can be. Karpency beat Chad Dawson by a 10 round split decision in October 2014 that shocked a lot of boxing fans. The win by Karpency didn’t end Dawson’s career, but it sent him down the road to where it eventually did end three fights later.

“I made history when I became the first super middleweight champion in the history of Mexican boxing, and now I’m moving up to the 175-pound division to continue making history,” Ramirez said.

Ramirez is capable of winning a world title at light heavyweight if matched against the right guy, but right now there doesn’t seem to be any weak champions in the division that he’s capable of beating. Out of the bunch, IBF champ Artur Beterbiev and WBO belt holder Sergey Kovalev are the most beatable right now. Some boxing fans would argue that Beterbiev is a solid fighter, and would destroy Ramirez without any problems. Beterbiev didn’t look great in his wins over Callum Johnson and Enrico Koelling. Ramirez would have a real chance of beating Beterbiev based on those two performances. Ramirez would obviously take some big shots during the course of the fight, but he would have a good chance of out-boxing the two-time Russian Olympian.

Ramirez wants to clean out the 168 and then go after the belt holders at 175. You have to ask what he’s been waiting for all this time. Ramirez captured the WBO super middleweight title three years ago in beating champion Arthur Abraham by a one-sided 12 round unanimous decision on April 9, 2016. Ramirez has since defended his WBO title successfully five times in beating Max Bursak, Jesse Hart [twice], Habib Ahmed and Roamer Alexis Angulo. Surely, there would have been plenty of time for Ramirez to mix in a unification fight against one of the super middleweight champions during the last three years. Top Rank hasn’t put Ramirez in with the right guys for him to take his career to the next level. Now he’s 27, and he’s looking at young talents like David Benavidez coming back and getting ready to make big noise at super middleweight. There’s also Callum Smith that many boxing fans feel is the best fighter in the division. If Ramirez is going to make a move to unify the 168 lb division, he’s going to need to make that move soon before those other fighters catch their stride and hit their prime. Benavidez, 22, looks like the real deal, and could be someone that eventually rules the super middleweight division with an iron fist. If Top Rank wants to make a star out of Ramirez, they should have him fight Benavidez and other champions at super middleweight right now rather than waiting for them to improve.

“I want to face the best fighters and clean out the division. I want all the titles,” Ramirez said. “I want to be one of the best pound-for-pound fighters in the world. I’m ready to prove I’m an elite fighter.”

The test move by Ramirez at light heavyweight is a curious one, because it’s a division where the top guys are expected to have a lot of punching power. Ramirez isn’t a puncher even at 168. Just what he’s going to be able to do against the best light heavyweights is the big question. It makes sense for Ramirez to go up to 175 for a nice payday fight against an older more vulnerable champion like Kovalev, but it might not be a good idea for Ramirez to mix it up with Beterbiev, Dmitry Bivol or Gvozdyk. It’s doubtful Top Rank will let Ramirez fight the unbeaten Bivol, because he’s not promoted by them, and he’s looking like he might be unbeatable right now. Ramirez matches up better against Kovalev than he would against Bivol.

If Ramirez doesn’t shine against Karpency on April 12, it’ll be an interesting to see what he does. Will Ramirez move back down to 168 to continue to defend his World Boxing Organization title against all comers or does he move up to light heavyweight on a permanent basis? If Ramirez moves back down to super middleweight, then he’s going to need to defend against the winner of the Billy Joe Saunders vs. Shefat Isufi. The winner of that fight will be the mandatory challenger for Ramirez if he keeps his WBO super middleweight title. Saunders is expected to beat Isufi, so Ramirez is going to have a very skilled fighter that he’s going to have to defend against soon if he decides to keep his WBO belt.