Derek Chisora: “To beat Usyk you might have to foul him a little bit, a couple of low blows…” 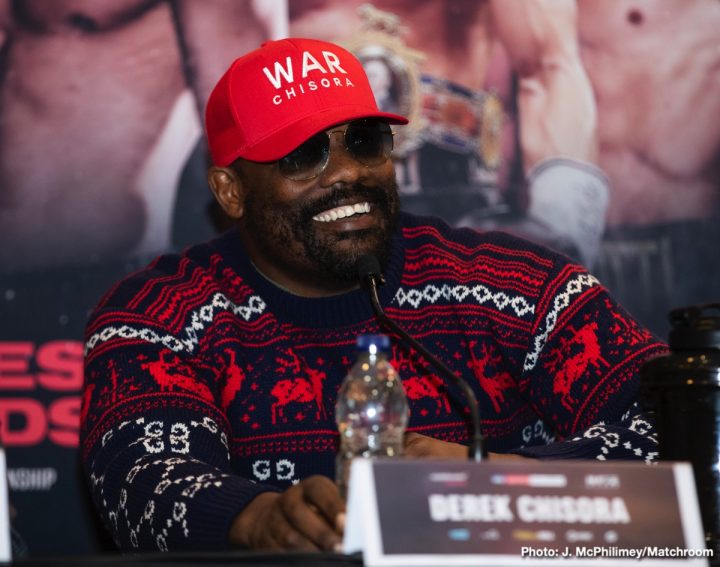 Derek Chisora says he would be open to fighting former undisputed Cruiserweight World Champion Oleksandr Usyk – should he come through his crunch Heavyweight clash with Senad Gashi at The O2 in London this Saturday, shown live on Sky Sports in the UK and DAZN in the US.

Pound-for-pound star Usyk makes his Heavyweight debut against former Chisora foe Carlos Takam at the MGM National Harbor in Oxon Hill, Maryland on May 25, and the Finchley man says Usyk’s switch to Heavyweight spells big trouble for the other members of the division.

“Usyk will be a nightmare for everybody,” said Chisora. “The moment he puts his weight on, he will be a nightmare. He has the punching power and the boxing skills, his movement will kill most Heavyweights. I think to win with that guy you might have to foul him a little bit, a couple of low blows!”

“Is he holding hand luggage or a massive suitcase of money? I love fighting – whoever wants it can have it. We do the deal, we sign, we get ready for it, we fight. Parker or I might go to watch Usyk – I don’t mind having some of that. I just want to fight. Most people are scared of fighting but, if I could fight every week, I would do.”

Chisora recently split with long-time coach Don Charles and is feeling upbeat after moving up to Yorkshire to train with Dave Coldwell at his gym in Rotherham alongside rising Featherweight talent Jordan Gill and two-time World Champion Jamie McDonnell.

“I like Don but it was time for a change,” added Chisora. “In the Takam fight, he (Coldwell) was on the other side and I could hear him shouting instructions, – and Tony (Bellew) told me it was a good move. He is making my feet move fast, everything move faster – I am feeling great benefits and everything is working out great.”

Chisora vs. Gashi is part of a huge night of boxing in the Capital.


« Lartey: Daniel Dubois is NOT the next Anthony Joshua