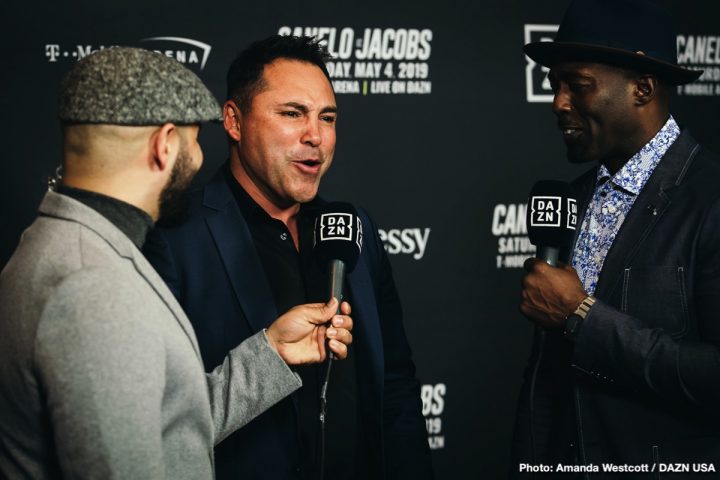 By Aragon Garcia: Golden Boy Promotions boss Oscar De La Hoya wants Daniel Jacobs to rest assured that he doesn’t need to worry about the judges for his unification fight this Saturday night against superstar Saul Canelo Alvarez on DAZN. De La Hoya says Jacobs (35-2, 29 KOs) should be more focused on winning the fight instead of thinking about whether the judges will be fair on Saturday night at the T-Mobile Arena in Las Vegas, Nevada.

Jacobs, 32, has been talking in the media about his worry of whether the judges will be fair in scoring the fight. The T-Mobile Arena in Las Vegas is the same venue where Canelo fought Gennady Golovkin twice. Some boxing fans believe that GGG was robbed in one or two of those fights. The reality is, Canelo outsmarted Golovkin, who was never able to make adjustments in those two fights. Never the less, Jacobs is worried that won’t get a fair shake from the judge. The set of judges that are working Saturday’s Canelo vs. Jacobs fight are the same three – Dave Moretti, Glenn Feldman & Steve Weisfeld – that worked the rematch between Canelo and GGG last September. However, the general view by the boxing public is Canelo deserved to win the rematch with GGG last September.

De La Hoya points out that anyone can lose in Las Vegas. Despite being the biggest star in boxing during his career, De La Hoya lost three decisions in Las Vegas against arguably less popular fighters in Felix Trinidad, Shane Mosley and Floyd Mayweather Jr. If De La Hoya could lose in Vegas, then anyone can.

“Anyone can lose in Las Vegas. I lost in Vegas and apparently I was always the favorite,” De La Hoya said to RingTV.com. “Anybody can lose and I would be surprised if Daniel Jacobs is thinking about that because I know what a professional he is. I can tell you Canelo is going in there with the mentality of winning and I expect Jacobs to do the same. Don’t worry about the judges; worry about the fight.”

If the fight does go to the scorecards and Jacobs loses, hopefully he doesn’t complain endlessly like he’s done for the last two years after his decision loss to Gennady Golovkin in 2017. Jacobs didn’t do enough in the GGG fight to win that match. Instead of taking the high road and giving the judges credit for being professionals and scoring it the way they, and many boxing fans saw it, Jacobs has complained that he should have been given the victory. Canelo and Golden Boy Promotions must know by now that if Jacobs loses a decision, he might choose to stubbornly resist agreeing with the result, and he could try and muddy the water by crying about being robbed.

Ideally, this weekend’s Canelo-Jacobs fight will end with a knockout, be it with Canelo winning or Jacobs winning. The best way to avoid controversy is for the fight to end by knockout, but that’s not likely to happen. Both fighters are elite level guys. Jacobs has only been stopped once in his career by Dmitry Pirog nine years ago in 2010 in a fifth round KO. Jacobs has improved a lot since then. Canelo has never been knocked out or even been close to being stopped.

If Canelo wins this fight on Saturday, it’s unclear who will be next for him. It was originally thought that Canelo and Golovkin would face each other in a trilogy match next September, but De La Hoya says that might not happen. Canelo and De La Hoya both wanted Golovkin to face WBO middleweight champion Demtrius Andrade first to win that belt before looking in their direction for the trilogy fight. Golovkin and and his promoter Tom Loeffler don’t believe that drastic is neccessary to get the third fight. They point out that Canelo didn’t have a title at the time he challenged GGG for his three belts back in 2017, so they shouldn’t require that he have a belt. They also point out that the boxing public and DAZN both want to see the third Canelo-GGG fight in September.

All the same, Canelo and De La Hoya have stated what they want, and they’ve drawn a line in the sand with the requirements that GGG will need to meet before he can get the trilogy fight. Golovkin will be fighting fringe contender Steve Rolls on June 8 on DAZN at Madison Square Garden in New York. Presumably, that will be the only fight for Golovkin before he and Loeffler look to make the third fight with Canelo. If the Mexican star holds his ground with his requirements that GGG win a world title first before he can get a third fight, then those two won’t be facing in 2019, and possibly never again unless Golovkin decides to agree with Canelo’s conditions and challenge one of hte champions at 160 or 168. Canelo could move up to light heavyweight in September and take on one of the fighters in that weight class. There’s also a possibility he could move back up to 168 to defend his WBA ‘regular’ title. WBA Super World super middleweight champion Callum Smith would likely be more than willing to take on Canelo.

Canelo thinks Jacobs is a tougher fight for him than Golovkin due to his size, speed and mobility.

“I understand why Canelo feels that way,” De La Hoya said about Jacobs . “Jacobs is a boxer who can move and throw combinations. He is slick and moves well and can fight too. Jacobs is a different style than what Canelo has faced…Jacobs is no dummy. I am sure he prepared well but how can you prepare for a complete fighter like Canelo? That’s why I can’t wait for Saturday night for us to see who is the best middleweight in the world.”

Golovkin might not like hearing De La Hoya describe the Canelo vs. Jacobs fight as the match to determine who the best fighter is in the middleweight division. What that means is GGG is now the #3 middleweight in the division. Golovkin has gone form #1 to #3, and he could slip even further if he doesn’t start facing the best once again.