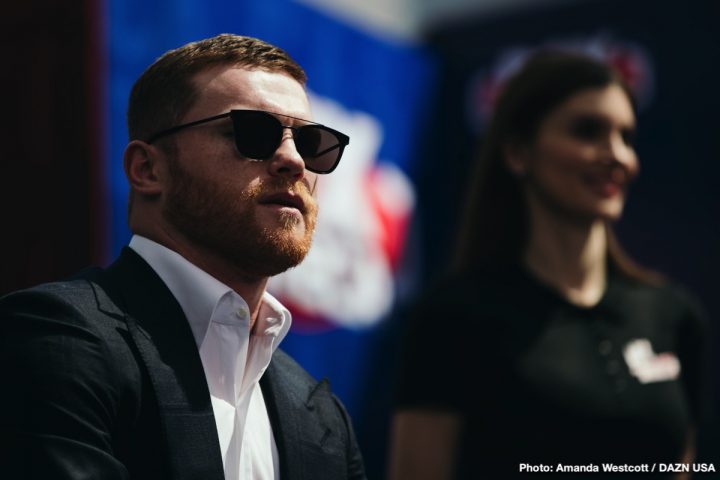 By Aragon Garcia: Promoter Oscar De Hoya has confirmed that Saul Canelo Alvarez isn’t kidding around by saying that Gennady Golovkin MUST win another world title to bring that to the table before he’ll fight him a third time in September.

De La Hoya says former IBF/WBA/WBC middleweight champion Golovkin (38-1-1, 34 KOs) has to make the move to win a world title to get the third fight. But with Golovkin already signed to fight unbeaten and virtually unknown Canadian fighter Steve Rolls (19-0, 10 KOs) on June 8 on DAZN at Madison Square Garden in New York, it doesn’t look like the Kazakh will have the title that Canelo and De La Hoya are telling needs to win be given the magic keys to the kingdom for a third fight.

It’s a pity that Golovkin and his promoter Tom Loeffler didn’t take Canelo seriously when he told him what his requirements are for him to get the third fight. Golovkin and Loeffler must not have believed Canelo, because they’ve gone in the opposite direction by facing Rolls. Not only is Golovkin not fighting a champion, he’s not even fighting a top 10 contender, which would really hurt a the promotion for a third Canelo vs. GGG fight.

You can understand if from Canelo and De La Hoya’s point of view for why they wouldn’t want to put together a trilogy fight with GGG under those circumstances. It’ll look too much like GGG is going for a cash out fight in the eyes of a lot of boxing fans if he faces a stiff before fighting Canelo in September. For the third Canelo vs. Gennady fight to mean anything, GGG needs to show that he’s still serious about his career, and isn’t just looking to get payday fights against Canelo.

“It’s NOT true that (Golovkin) has the fight in September with Canelo,” De La Hoya said to ESPN Deportes. “I agree with Canelo, one hundred percent, Golovkin has to climb again. Canelo is now the champion and he has many options, he can go up to 168 pounds, go up to 175 pounds and make history. If GGG wants to fight Canelo, he has to fight before a world championship,” De La Hoya said.

From Canelo’s side, he’s risking his neck by fighting for a world title against a very tough opponent in IBF middleweight champion Danny Jacobs. He expects the same from Golovkin to go after the WBO belt against champion Demetrius Andrade. If Canelo beats Jacobs, he’ll have 3 of the 4 titles in the middleweight division in his possession after next Saturday night. He wanted Golovkin to fight for the WBO strap, and bring that title with him when they fight in September.

Instead of doing that, Golovkin is fighting Steve Rolls. It appears that Golovkin believes that he’s still going to get the fight with Canelo. That be a mistake on GGG’s part, because it doesn’t look like it’s going to happen judging by De La Hoya’s comments. Canelo would be doing Golovkin a favor by giving him a fight he didn’t earn. GGG might have made a mistake in thinking that the trilogy fight with Canelo would be an automatic think just based on him signing with DAZN. That’s not how things work. This isn’t an automatic thing.

Canelo doesn’t have to fight GGG just because he signed with DAZN. If Canelo wants to fight Golovkin, he can do that. If not, he’s not going to be forced to face him. As long as Canelo is involved in fights that bring in the subscribers to DAZN, that’s all that’s important. Canelo vs. Kovalev will bring in massive amounts of subcribers to DAZN. That fight is a gold mine. That’s the one that Canelo needs right now.

Golovkin is arguably hurting his own popularity by taking a fight against an unknown opponent in Rolls after a loss to Canelo. That’s the worst thing GGG could have done. It presents the image to the public that Golovkin’s confidence is shaky. That’s not good for Canelo. What Golovkin should have done was shown strength and courage by setting up a fight with Andrade or one of the talented super middleweights like Callum Smith.

Canelo has already said that he wants to fight Kovalev. That’s a better fight than a third fight against Golovkin, because more boxing fans would tune in to see Canelo face a fighter two divisions above his current weight class at middleweight. It would be a history making fight for Canelo if he moved up to 175 to face Kovalev for his WBO title.

Since it’s virtually impossible for Golovkin to fight in June against Rolls, and then face Andrade immediately after that in a quick fight before September, it’s safe to say that there won’t be a Canelo vs. GGG trilogy fight in September. Golovkin can always try to move down to 154 or 168 and see if he can line up a quick fight in one of those divisions, but that’s not going to happen.

De La Hoya believes there will 20,000 fans filling the T-Mobile Arena next Saturday night on May 4. Although the tickets still aren’t sold out, there’ expected to be a huge walk-up crowd on the night of the fight with a massive amount of Canelo fans streaming into the beautiful T-Mobile Arena to cheer him on the victory this important legacy fight for him.

“There are tickets left, but few. We know that it will end on May 4 with boxing fans,” De La Hoya said about the available tickets for the T-Mobile Arena for next Saturday. “We have no doubt that we will fill the arena. There will be 20 thousand souls supporting Canelo in Las Vegas.”