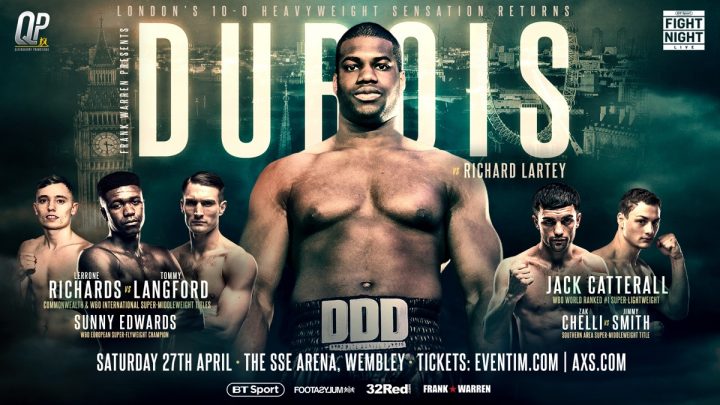 One of the sport’s fastest-rising heavyweights, Daniel Dubois, returns Saturday when he takes on Ghanaian puncher Richard Lartey for the vacant WBO Global strap in the main event from The SSE Arena, Wembley in London.

This will be the fourth ESPN+ appearance for Dubois (10-0, 9 KOs), a 21-year-old London native who has seven knockout victories within the first two rounds. After going 3-0 in 2018, he opened up his 2019 slate March 8 against former world title challenger Razvan Cojanu. Dubois knocked out Cojanu in the second round with a chopping right hand.

Lartey (14-1, 11 KOs) has won eight consecutive fights since the lone loss of his career, a fifth-round TKO loss that saw him retire on his stool due to an injury. He has won four in a row via knockout but will be making a seismic step up in class versus Dubois. In his last bout, Dec. 24 of last year in Accra, Ghana, he stopped Morris Okola in the 10th round to pick up the WBO Africa heavyweight title.

Sunny Edwards (10-0, 3 KOs) returns to defend his WBO European junior bantamweight strap against Pedro Matos (7-1, 1 KO) in a 10-round tilt.

Lerrone Richards (11-0, 3 KOs) and former British middleweight champion Tommy Langford (21-3, 6 KOs) will duke it out in a scheduled 12-rounder for the vacant Commonwealth and WBO International super middleweight titles.

Super lightweight contender Jack Catterall (23-0, 12 KOs), coming off a career-best win over Ohara Davies, will seek to continue his momentum versus Oscar Amador (10-17, 1 KO) in an eight-rounder.

QUEENSBERRY PROMOTIONS ARE delighted to announce that hot on the heels of his exciting knockout of former world title challenger Razvan Cojanu, Daniel Dubois will be headlining on April 27 at the SSE Arena, Wembley, live on BT Sport on a card that features a wealth of exciting up and coming talent.

The 21-year-old from Greenwich added a fourth belt to his collection at the Royal Albert Hall last week when he won the WBO European title, to compliment the WBC world Youth, Southern Area and English title honours already in his possession. It is expected that a win over Lartey will see Dubois break into the WBO’s top 10 heavyweight rankings.

In his first contest since his unanimous decision win over Ohara Davies last year, unbeaten WBO number one ranked super lightweight Jack Catterall (23-0) will also return on the card. Catterall will feature in a 10 round contest before he goes on to face world champion Maurice Hooker later this year as mandatory challenger.

Sunny Edwards (10-0) also returns and will defend his WBO European Super-Flyweight Championship. The fledgling career of 23-year-old from Croydon – who trains in Sheffield – is on a genuine upward trajectory following fine wins over Ryan Farrag and Junior Granados in his last two fights and he is quickly becoming a force to be reckoned with in the flyweight or super flyweight ranks.

Exciting Fulham super middleweight Zak Chelli (5-0) will be involved in his first title fight, taking on Jimmy Smith (7-1) for the Southern Area Championship.

Dubois’ win over Cojanu was a statement performance from the big-hitting young heavyweight against an opponent who had previously extended both Joseph Parker and Nathan Gorman the full 12 rounds.

The Martin Bowers trained heavyweight hitter was assured by his promoter Frank Warren that he will be kept busy in order to build towards a blockbuster domestic clash against the Ricky Hatton-trained Gorman towards the end of the year.

Dubois, who will fight for the first time at Wembley, is happy to be back in action just over a month after his last success.

“When Frank said I would be kept busy and would keep stepping up my progression it was music to my ears,” said the 10-0 star with nine KOs to his name.

“I was pleased with my last fight and with how I got the job done and I think you could see the improvements I have made since fighting Kevin Johnson.

“I want to continue being tested and showing people what I am all about. Lartey is a good opponent for me and will bring something different to what I have encountered before.

“He is a dangerous fighter but, as always, how the fight plays out will come down to what I bring on the night and I am confident I have got what it takes to pass this latest test put in front of me.

“I am looking forward to fighting at Wembley because, like the Royal Albert Hall, it is a place where the great British heavyweights of the past have been showcased and I hope the public get behind me in the same way they did last Friday because it made it an even more special night for me.”

Promoter Frank Warren added: “It is all about building a real momentum with Daniel because he is not a long way off the top fighters in the heavyweight division.

“As I have said already, we will keep him very busy and carry on stepping up the levels. Lartey has got ambitions of his own and there is no doubt he will be coming to win and make a statement of his own.

“His only defeat was due to an injury-enforced retirement over four years ago and he has built a pretty formidable record – so we should be in for an explosive encounter on the night.

“People are really starting to sit up and take notice of Daniel now and it was pleasing to see how the fans really got behind him at the Royal Albert Hall last week. I fully expect this to continue at Wembley and we are putting together another top night of boxing.

“British boxing is going through a transitional phase right now with a lot of top fighters retiring, leaving the door open to build the stars of tomorrow, give them a chance to shine and give them greater exposure. We’ll be setting up the arena for 6 thousand just like I did in the early days of Ricky Hatton in Manchester, slowly building big ticket sellers. We want to make these London venues the homes of the exciting young local talent we have coming through.”

ARCHIE SHARP BELIEVES a fight with the British super featherweight champion, Sam Bowen, is an inevitable encounter that is there to be made.

The WBO European champion Sharp, who de-throned Lyon Woodstock to claim his title back in October, makes a return to the ring on April 27 at the SSE Arena, Wembley, where he will box an eight-rounder to shake off the ring rust after recovering from injury.

His immediate goals, should he emerge unscathed at Wembley, are to defend his title while seeking to expand his belt collection by taking on other champions.
This means Bowen – who also holds the WBO Intercontinental title – fits the bill nicely and Sharp agrees it is a natural match-up.

“Exactly that and the Bowen fight is going to happen,” insisted the Welling-based 23-year-old. “We’re both unbeaten, we’re both with Frank (promoter, Warren) and we’re both top prospects.

“So that fight is going to happen. When it is going to happen I am not too sure, but it will go ahead in the future. I saw an interview where they were talking about Scott Quigg, so they are chucking names about trying to go for something bigger.

“I’ve got names I would like to look at as well like Lee Selby and Sam Bowen is amongst those names too, so we will see what happens.”

Sharp knows full well that stepping in with Bowen would represent a step up from his 14 previous opponents, but his confidence and self-belief has been infused by the recording of such an accomplished victory over Woodstock on away turf in Leicester.

“Great fighter, I am a great fighter too, so it will make a great fight. One hundred per cent it is a clash of styles, he is a very strong fighter and I am a very classy fighter. At the end of the day I feel like it would be the Woodstock fight all over again.

“I know he is stronger than Woodstock, but I am getting stronger every day.”

Also present on the super featherweight landscape is Zelfa Barrett – soon to return after injury – and Woodstock, who registered a comeback win in March.
Both are bidding to make a return to title contention but, in the opinion of Sharp, they are currently lagging behind with the also-rans and would need to bring something to the table before he would consider them a viable opponent.

“Yes, I don’t even particularly want to mention their names. I know Lyon is out there trying to get a rematch, but they are both beaten fighters so why don’t they box each other and do what they’ve got to do.

“Once they start winning belts they can get in the mix with us.”

The following are the weights and the running order for the The SSE Arena, Wembley on Saturday 27th April. The show is live on BT Sport 1 from 8:00pm.