Khan ready to shock the world against Crawford 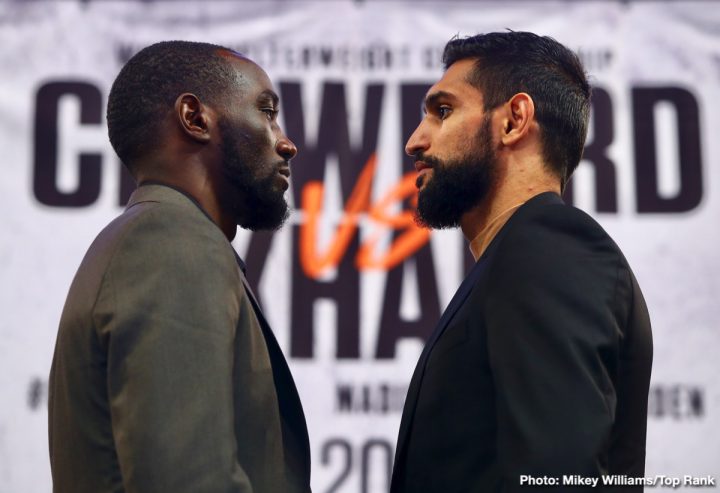 By Mike Smith: Top Rank has selected what they arguably feel is a sacrificial lamb in Amir Khan to feed their fighter Terence Crawford this Saturday night on ESPN PPV at Madison Square Garden in New York.

Khan and Crawford are evenly matched in the power department. Crawford, 5’8″, isn’t a big puncher at 147, despite what some talking heads say about him. Crawford isn’t a big puncher at all. He’s right at Khan’s level in the power department. Khan had the advantage in hand speed. Both are about the same in terms of mobility. Crawford has been looking good since he moved up to 147 last year, but he’s been helped dramatically by the match-making that his promoters at Top Rank has done for him.

They’re either purposefully matching Crawford against beatable opposition to make him look better than he actually is to fool the casual boxing fans or they’re just unable to negotiate with other promoters that have superb fighters signed with them. Crawford has six strikes against him when it comes to other promoters wanting to put their fighters in with him and they are as follows: He’s a counter puncher, he moves a lot, he switches his stances constantly, he’s not popular, he’s hard to hit and he has fast hands.

Crawford (34-0, 25 KOs) is an aging fighter whose career is flying by without him mixing it with the best, and his popularity has suffered because of the lack of big name opposition. Top Rank Boxing was able to sign a faded Khan (33-4, 20 KOs) to take the fight with WBO welterweight champion Crawford, and they’ve stuck the fight on ESPN pay-per-view, which is strange move on their part, as neither fighter has a large fan base.

Khan, 32, thinks he’s going to shock the world by beating Crawford. The odds-makers disagree, picking Crawford to win by the line -1800 for Terence and Khan at +900. With those lopsided odds, you have to wonder about the wisdom of Top Rank putting the Crawford vs. Khan fight on ESPN PPV. The fight would have been much better off being shown on regular ESPN. This writer isn’t talking about ESPN+, the one you have to subscribe for.

“For those people, and even Crawford if he’s thinking this way, that are thinking it’s going to be an easy fight for him because they’re taking me from the last fight against [Samuel] Vargas, I think I’m going to shock the world, definitely,” Khan said to Yahoo Sports News. “If they’re thinking I’m going to be the same fighter as that fight, they’ll be in for a big shock.”

Khan has been exposed four times in the past in losses to Breidis Prescott, Lamont Peterson, Danny Garcia and Saul Canelo Alvarez. The good news is Khan hasn’t lost a fight in three years since his sixth round knockout defeat to Canelo Alvarez in 2016. Unfortunately, he’s only fought ever since in beating Phil Lo Greco and Samuel Vargas. Khan didn’t look at all good in the Vargas fight last September in getting knocked down in the second round, and hurt by a fighter that was supposed to have an easy tune-up for him. The way that Khan looked against Vargas, it had to have been a great lure for Top Rank to want to sign him as soon as they could to put him in with Crawford for a sure thing win for him.

Well, if Khan can pull off the upset, then the boxing fans that are paying to see the fight on ESPN PPV will be happy. It’s not that they don’t like Crawford. It’s that they don’t like when a top fighter picks out over-the-hill opposition to look good against. The fans would have much preferred to see Crawford fighting the likes of Errol Spence Jr., Manny Pacquiao, Keith Thurman, Shawn Porter, Danny Garcia, Regis Prograis, Jose Ramirez, Josh Taylor, Maurice Hooker, Jermell Charlo, Jarrett Hurd, Jaime Munguia, Tony Harrison, Erislandy Lara or at the very least, Yordenis Ugas. You’ve got to be inventive with a fighter like Crawford, because he BADLY needs to start facing quality opposition, because it’s getting late in the game for him. Crawford is about to turn 32, and he still doesn’t have one big name on his resume. His only notable win during his 11 year pro career was against Yuriorkis Gamboa, and in that fight, the Cuban was fighting two divisions above his natural weight class of featherweight. Crawford didn’t even look good in that fight. Gamboa was dominating him until he slipped and hit while he was falling down. The referee Gernaro Rodriguez blew the call by saying it was a knockdown. It shouldn’t have been. Gamboa then lost his cool at the blown call by the referee, and he just started swinging for the fences and fighting with anger instead of intelligence. That’s all Crawford needed to take over the fight, and cruise to a ninth round knockout win. Crawford already had the size on his size against the much smaller WBA featherweight champion Gamboa.

It would have been ideal to put Crawford-Khan on regular ESPN, because that way at least the boxing public won’t be furious afterwards for having thrown away their hard-earned money when Crawford destroys Khan. When fans pay to see fights on pay-per-view, they want to see quality. That’s number one. Number #2, they want to see competitive matches, not slaughters involving an over-the-hill fighter with a chin problem taking on a guy that is rated in the top five pound-for-pound. Obviously, the pound-for-pound ratings are just junk stuff that means nothing in predicting who will win a particular fight, but in this case, it says a lot that Crawford is rated highly by Ring Magazine, and Khan nowhere to be found. It’s clearly a mismatch, and if it turns out to be bad as the odds-makers think it’ll be, there’s going to be some unhappy fans that have thrown their money away ordering the Crawford-Khan fight thinking it was going to be thrilling and competitive.

“He is a very good boxer. He is going to give Crawford a hell of a fight,” said Crawford’s promoter Bob Arum of Top Rank Boxing to Yahoo Sports News. “If he’s at his best and Crawford’s at his best, I’m not saying he’s going to win. What I am saying is, if Crawford is looking past him to some other fight, which I don’t think he’s doing, Khan is quite capable of winning this.”

Arum is accurate with his assessment of Crawford not looking passed Khan towards another fight in the future. What other fight would Crawford be looking at? There’s nothing that Arum has on the future boiler for the Nebraska native. Arum has been talking about how he’s going to call Al Haymon next week to try and put together a fight between Crawford and IBF welterweight champion Errol Spence Jr., but that’s not going to happen. It’s unclear whether Arum was serious at all in saying he’s going to call Haymon up. If he is serious, he’s likely wasting his time, because the Spence vs. Crawford is not going to get made right now. Spence has too many options available to him for big fights against Haymon-managed fighters like Keith Thurman, Manny Pacquiao, Shawn Porter and Danny Garcia. Those are four good fights with potential rematches for each one of them. We’re probably looking at a fight between Spence and Crawford being kicked down the road three, possibly four years before it eventually happens. Crawford will be 35 or 36 by the time he meets up with Spence. Will Crawford still be a champion at that age? Yeah, probably if Arum is going to be putting him in with faded guys like Khan, and beatable contenders like Jeff Horn and Jose Benavidez. Whatever chance Crawford might have had to beat Spence will likely go down the drain due to age. Crawford’s game is build on hand and foot speed. At 35 or 36, he’s not going to be as fast as he is now, and he’s going to have problems against Spence. Even then, that fight will likely need to take place in the 154 lb division or not at all.

Khan has the speed advantage over Crawford, and he can move as well as him. The problem that Khan will likely have on Saturday night is his habit of throwing sustained combinations that leaves him open. When Khan starts throwing combinations, he’s going to get caught in between those shots. Khan would be safer to throw one fast shot at a time against Crawford, who is a counter puncher, and thrives on fighters that throw combinations. There are fighters that would make Crawford miserable with their combination punching, guys like Errol Spence Jr. and Shawn Porter. Those fighters have the chin to deal with Crawford’s single counter shots. They would take his counter punching and keep on unloading on him until he either drops or is forced to run away. Khan can’t do that, because he doesn’t have the punch resistance to fight in that manner. He’s got to stay disciplined and focus on just throwing one punch at a time. Khan has amazing talent. What he doesn’t have is a great chin or common sense not to put himself at risk. In other words, Khan is too brave for his own good. He possesses excellent boxing skills, but he doesn’t always use the right judgement in his fights.

This fight looks so out of place on ESPN pay-per-view. Fans would want to see it if it were on regular ESPN, but unfortunately it’s not going to be seen by a lot of boxing fans, who follow the sport and realize it’s a sick mismatch involving a top fighter facing a faded guy that is yesterday’s news in Khan. This match would have made sense if Top Rank made it nine years ago in 2010 when Khan was on the top of the world after beating both Paulie Malignaggi and Marcos Maidana. The fight would have been a great one way back then. But since 2011, Khan has suffered three devastating defeats at the hands of Lamont Peterson, Danny Garcia and Canelo Alvarez. Those defeats knocked Khan’s career off kilter, and he’s been unable to right it. Khan got hung up on taking tune-ups/confidence builders, and then he started traveling the world, and not focusing on boxing. Since 2013, Khan has been more of a part time fighter, and not a true boxer. The fact that Khan was able to continue fighting at high enough level to still beat a decent fringe contender in Samuel Vargas is a testament to the talent level that he once had, but he’s clearly lost a huge amount of his game by not staying active with his career since his loss to Danny Garcia in 2012.

Crawford should win this fight without any problem on Saturday night, but it’s going to be against the same type of beatable opposition that his promoters at Top Rank has been feeding him for the last five years. It’s a fight that many boxing fans are going to hear about rather than see it happening, because a lot of them aren’t going to want to pay to see it because it’s a mismatch. It would have been better off for Top Rank to setup a fight between one of their prospects with Khan rather than Crawford. Khan would have been perfect for Teofimo Lopez. That at least would be compelling due to the size advantage Khan would have over Lopez.