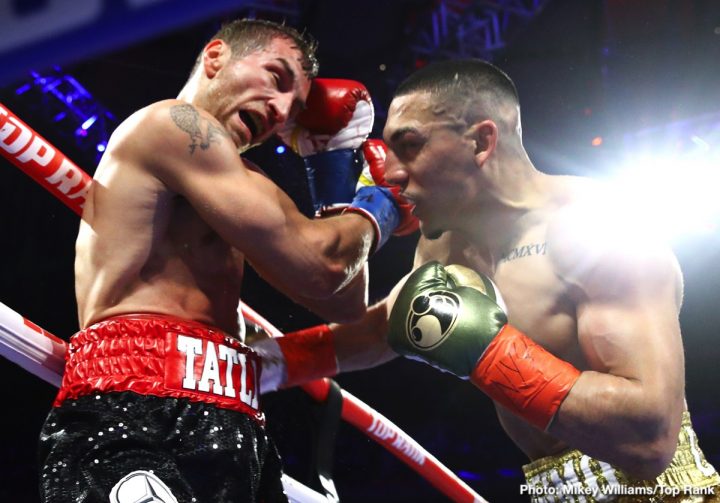 Hot lightweight contender Teofimo Lopez continued to be the most talked about fighter in the sport of boxing as he knocked out European champion Edis Tatli in the 5th round of their bout at Madison Square Garden.

With the win, Lopez (13-0, 11 KOs) retained the NABF Lightweight title, and moved one-step closer to a world title opportunity.

Lopez controlled the fight from the opening bell as he showed off superior boxing skills, and with each moment started land power shots with more authority.

In round five, Lopez landed a thudding right to the body that sent Tatli down for the count of ten at 1:32.

It was the first time in the 34-fight career that Tatli, who is a former world title challenger has been stopped.

The fight, which was the co-feature the Terence Crawford – Amir Khan title clash, further made the case for Lopez as being the top lightweight contender in boxing, and that a title shot could come as early as this Summer.

“I didn’t have the best camp, but I did what I needed to do and came out victorious,” Lopez said. “I knew I was going to get him with a body shot. I softened him up and finished him.

“I want a world title shot next. That’s what I want. We promised to take over the show, and once again, I took it over.”

Two-Time Olympian from India, Vikas Krishan made it two straight to start his pro career as he took a six-round unanimous decision over Noah Kidd at Madison Square Garden in New York.

The Krishan – Kidd bout was seen live on ESPN 2.

Krishan fought through a cut over his left eye, but controlled the action with his aggressiveness, and he landed shots on the inside as well boxed well from distance. Krishan won by scores of 60-54 twice and 59-55.

The 27 year-old Krishan was an Olympian in 2012 and 2016, and is the only Indian fighter in history to capture gold medals at both the Asian and Commonwealth Games as well as the AIBA Youth Boxing Championships.

In 2012, at the London Olympics, he defeated current IBF welterweight champion Errol Spence Jr. via 13-11 decision, only for the decision to be controversially overturned five hours later due to various fouls Krishan committed during the bout.

In the last Olympics, Krishan made it to the quarterfinals. He became the first three-medal winner of the Asian Games as he won a Bronze Medal.

Jones was able to drop Brow with a hard right hand. Jones continued to dominance as he landed a flurry of punches to the body and head before the bout was stopped.

With the win, Jones, 24 years-old of Leesburg, Virginia is now 10-1 with eight-knockouts.

This past Saturday at the Scottish Rite Theatre in downtown San Antonio, welterweight’s Gilbert Venegas Jr. (11-1, 7 KOs) and Hector Coronado (2-0, 2 KO), both who are managed by Greg Hannley of Prince Ranch Boxing and promoted by TMB & PRB Entertainment, scored impressive knockout victories.

Venegas stopped Adam Ealoms (3-17-3, 1 KO) by way of a brutal fourth round knockout. A powerful overhand right landed flush on the chin of Ealoms, sending him straight to the canvas, forcing the referee to end the bout immediately.

“I felt like my old self fighting at my normal weight,” said Venegas, who cut down to 140 lbs. in his las bout. “In my last bout I was totally weight drained and it cost me. This time I was way stronger going into the ring and I got the knockout. It felt great to get back in the win column.”

Coronado, a rising prospect from Del Rio, Texas, scored a first-round knockout Jesus Angulo (4-13, 3 KOs). Coronado ended the bout with a flurry of punches toward the later half of round one.

“I’m very happy with the way my career has started,” said Coronado. “I just want to stay busy and continue to learn my craft as a professional fighter. I have a great team around me, and I know with hard work, many doors will open up.”

“With Venegas fighting at this normal weight, he can compete with anyone in the division.” said manager Greg Hannley. “Coronado has all the talent in the world to become something special in this sport. Both fighters are a staple of the Prince Ranch Boxing brand and I’ll be exploring other fights for them in the near future.”

“I was very impressed with Venegas because he knocked out a very durable opponent,” said TMB & PRB Entertainment promoter Rick Morones Jr., “Coronado is a young lion with power in both hands. We have a lot of talented young fighters that we are grooming for the championship level. After a few more years these kids will be ready for their shot at a world title.”

“We had a very nice crowd in attendance this past Saturday,” said Alex Draghici of TMB & PRB Entertainment. “Venegas and Coronado both delivered spectacular performances.”

“What Erick did really well was set traps and have Estrella walk into his punches,” said Doug Fischer, color commentator for TB Presents. “As a result, Erick did a great job timing his punches all night.”

Indeed, Ituarte loaded up on his right hand for most of the fight, and Estrella failed to make the necessary adjustments to make it a competitive night.

“I knew he would try to come forward and attack me in a straight line,” Ituarte said after the fight. “I just waited for the openings and landed plenty of clean shots throughout.”

Ituarte looked sharp and well-conditioned despite an 11-month layoff. He had considerable snap on his punches and showed no signs of ring rust.

“I felt strong heading into this match up and I think it showed in my performance,” Ituarte said.

In the co-feature, junior middleweight Richard Brewart (5-0, 2 KOs) of Upland, Calif. showcased a polished boxing ability on his way to a dominating decision win over Sergio Ramirez (6-6, 6 KOs) of Mexico.

Brewart, 20, displayed a significant amount of patience throughout the four round fight. He mixed his attack well by never relying too heavily on a single approach. Ramirez, who took the fight on short notice, failed to mount any type of counter attack. Brewart essentially walked him down in every round and connected with a variety of combinations. Scores 40-36 all around.

Heavyweight prospect Oscar Torrez (5-0, 2 KO) of San Bernardino, Calif. remains undefeated after a fourth round stoppage of Thomas Hawkins (4-4, 1 KO) of Houston. Torrez had the faster hands and better footwork throughout the fight, which was scheduled for four rounds.

In the third, Torrez stunned Hawkins several times with his right hand, which later set up the knock out finish in the ensuing round. Official stoppage time came at the 1:20 mark.

Crowley landed most of his clean shots in the first and fourth rounds, while McCowen did his best work in rounds two and three. Crowley’s go-to punch was a compact, right cross, while McCowen was able to connect with a left hook.

“Locked n’ Loaded” was presented by Thompson Boxing Promotions and sponsored by Everlast.

“Training in the same place as heavyweight legends at the Kronk Boxing Gym in Detroit has improved and taken my skills to the next level,” said Davtaev. “We trained for the knockout and i am happy that I was able to execute the game plan perfectly. I am now ready to take the next step up in the Heavyweight ladder.”

“I am happy with my victory and am now ready to challenge the best in the world,” said Salamov. “I am ready to take the light heavyweight world crown!”

All three fighters’ promoter, Dmitriy Salita, said his young contenders are moving into position for their first world-title shots.

“Apti’s size, strength and boxing skills make him a big threat in the heavyweight division. He is making a name for himself as one to watch in the deep pool of talented heavyweights. This is going to be a big year for Apti.

“Umar, continued Salita, “has consistently showed improvement on a world-class level over the last year. This was a very impressive win that puts him in line with the best light heavyweights in the world.

“And lastly, Aslambek is emerging as one of the best super middleweights in the world and he is only 23 years old! He has consistently improved and is now a bonafide threat in the division. He has all the tools to be a world champion.”

The lucky fans who attended FFC 35 in the sold out Fight Dome in Las Vegas were treated to a boxing classic between Mayweather’s Kevin Johnson and Utah brawler Larry Gomez.

For Vegas-based, Detroit-born Johnson, Gomez represented a tough domestic opponent who had yet to taste defeat in his eight professional boxing bouts. When you factor in Gomez’s seven knockouts and his brawling style, Johnson would’ve been foolish to expect an easy night.

Gomez obliged and stood toe-to-toe for eighteen minutes with Johnson, with both men throwing everything at each other, refusing to drop to the canvas. The passionate crowd was split between the red and blue corner, with a strong Utah following roaring Gomez forward.

Johnson, under the tutelage of Otis Templeton and Roger Mayweather reeled off his combinations and looked to take control of the ring… but Gomez just kept coming back and throwing everything at the Michigan man.

The capacity crowd were brought to their feet at the conclusion of the six-round super lightweight bout, with refereeing legend Tony Weeks in awe of both boxers. The judges’ decisions reflected the back-and-forth nature of the bout, with the scorecards split but in favour of Kevin Johnson.

Johnson moves to 2-0 under the FFC banner, with a title shot seemingly in sights for the twenty-six-year-old. Who’s next for Johnson?