Berchelt vs. Vargas and Navarrete vs. Dogboe on May 11 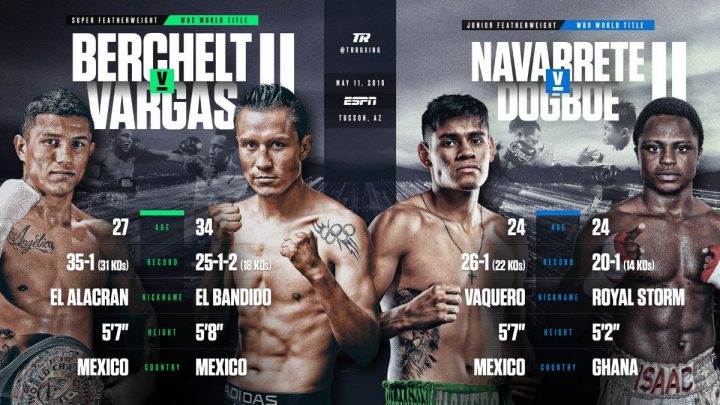 Miguel “El Alacran” Berchelt and Francisco “El Bandido” Vargas waged pugilistic war once before. The Mexican warriors, two-plus years removed from their breathtaking battle, are set to do it again.

Berchelt, who snagged Vargas’ WBC super featherweight title via 11th-round knockout in January 2017, will make the fifth defense of that belt on Saturday, May 11 at the Tucson Arena, located inside the Tucson Convention Center

In the sensational co-feature, WBO junior featherweight world champion Emanuel Navarrete will look to repeat the deed when he defends his title in an immediate rematch versus Isaac “Royal Storm” Dogboe, whom he defeated by unanimous decision last Dec. 8 on the Vasiliy Lomachenko-Jose Pedraza card.

Berchelt-Vargas 2 and Navarrete-Dogboe 2 will be televised on ESPN and ESPN Deportes beginning at 10 p.m. ET. The undercard will stream live starting at 6:30 p.m. ET on ESPN+ — the new multi-sport, direct-to-consumer subscription streaming service from The Walt Disney Company’s Direct-to-Consumer & International segment in conjunction with ESPN.

Promoted by Top Rank, in association with Golden Boy Promotions, tickets for this world championship event priced at $102, $77, $52 and $27 go on sale Tuesday, April. 2 at 12 p.m. ET/10 a.m. MST. Tickets may be purchased at any Ticketmaster outlet, online at www.Ticketmaster.com, by phone at (800) 745-3000, or by visiting the Tucson Convention Center ticket office.

“Francisco Vargas is a great Mexican warrior, just like I am,” Berchelt said. “I am training at my best to prove once again that I am not only better than him, but that I am the best 130-pounder in the world.”

“I have no doubt that 2019 will be my big comeback year,” Vargas said. “The three wise men came bearing gifts, and one of them is my highly awaited rematch against Miguel Berchelt on May 11. Like I said before our first fight, Mexicans never back down, and I will show that once again in the ring.”

“We’re all looking forward to this card. Berchelt-Vargas and Navarrete-Dogboe were incredible action fights the first time around, and the rematches will provide fireworks,” said Top Rank chairman Bob Arum. “This is surely one of the great fight cards of 2019, and there is no better place for it to take place than the incredible city of Tucson. The fight fans there are passionate, knowledgeable and will sell the building out.”

News:
Mikey Garcia wants to win a world title at 147

“The first fight between Francisco Vargas and Miguel Berchelt was a war,” said Eric Gomez, President of Golden Boy Promotions. “Vargas came up short that night, but it’s been his only loss. Since then, he’s gotten a lot better by training with Joel Diaz, so I’m even more confident now that Vargas will get his belt back. Golden Boy Promotions is committed to making the best fights, and we’re happy to be working with Top Rank and Zanfer Promotions to make another classic battle.”

Berchelt (35-1, 31 KOs) is a pure boxer-puncher who has won 14 in a row since his only defeat, a controversial first-round knockout that most experts believe was stopped prematurely. He had been an interim world champion before facing Vargas in Indio, California. It was a back-and-forth affair that saw Berchelt steadily wear down Vargas until the referee stopped the bout at 2:19 of the 11th round following a flurry of punches. He went 3-0 in 2018, most recently stopping Miguel “Mickey” Roman in the ninth round of a Fight of the Year contender.

Vargas (25-1-2, 18 KOs), who has won two straight since the Berchelt loss, is incapable of making a boring fight. He was one half of the Fight of the Year in 2015 and 2016. In 2015, bruised, battered, and with a busted eye that nearly caused the fight to be stopped, he came back to knock out Takashi Miura in the ninth round. In 2016 he fought Orlando “Siri” Salido in a seesaw battle that ended in a draw. In his last bout, he knocked out Rod Salka in six rounds, setting the stage for what promises to be an all-action sequel.

Navarrete (26-1, 22 KOs) has won 20 consecutive bouts, bursting onto the world scene with his shocking upset of Dogboe. In their initial contest, he pressed the action and busted up Dogboe to notch the well-deserved decision. A two-fisted power puncher, the Dogboe victory ended his knockout streak at eight. Dogboe (20-1, 14 KOs), 24, emerged in 2018 as the latest in the long line of fan-friendly Ghanaian champions. A member of Royal Badu family of Anyako in the Volta Region of Ghana, Dogboe snatched the WBO junior featherweight title from Jessie Magdaleno in April 2018, coming off the deck in the opening round to stop Magdaleno in the 11th. He defended his title in August, steamrolling Hidenori Otake in one round. Then, he ran into the upset-minded Navarrete, who put a halt to Dogboe’s magical run. Come May 11, Dogboe will have a chance to regain his status as one of the sport’s elite young talents.

“I am ready to show the world that our first fight was no accident,” Navarrete said. “I am the better fighter, and I will show that again. Dogboe made a mistake in taking this rematch.”

“Look, in my last fight, I wasn’t fit. I underestimated Emanuel Navarrete,” Dogboe said. “But you know something, at my lowest, he couldn’t knock me out. This fight, May 11, it’s a guarantee: Isaac Dogboe is here to set the record straight. Tucson, it’s going down. You don’t want to miss this fight. It’s a fight people are going to be talking about for a very, very long time. A fit Isaac ‘Royal Storm’ Dogboe is a dangerous Isaac ‘Royal Storm’ Dogboe. May 11, I’m coming for my title!”

Boxing » Press News » Berchelt vs. Vargas and Navarrete vs. Dogboe on May 11