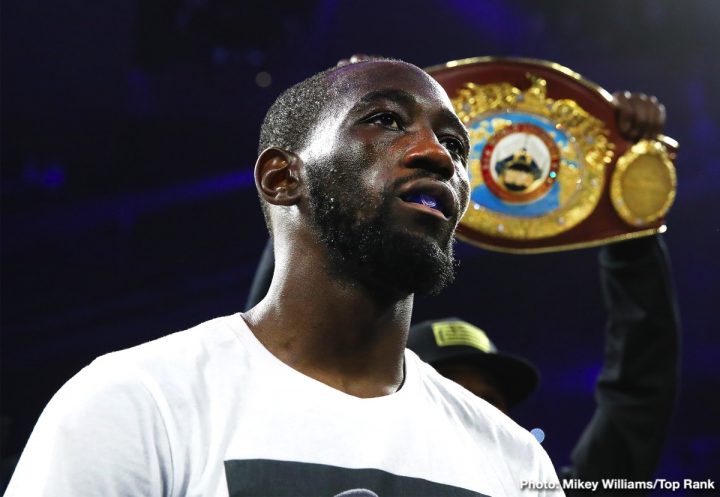 If Crawford going to be the successor for Leonard, then Arum needs to step it up already and start putting in with better opposition soon, REAL soon. By the time Leonard was 35-years-old, he was a shot fighter physically. Leonard was 35 when he was totally dominated by Terry Norris in 1991. Leonard was a guy that won his fights with his hand speed more so than his power. Once the speed was gone, Leonard didn’t have enough punching power to extend his career.

Crawford is 31 now. If he’s the next Leonard, then Arum only has four more good years with Crawford before he’s over-the-hill, and started getting batted around the ring like Leonard did when he was 35. If Arum can’t match Crawford against any of the top elite level fighters with Premier Boxing Champions, then the only guys Crawford will be fighting are fighters like Khan, Jeff Horn, Jose Benavidez, and Egidijus Kavaliauskas. Crawford isn’t going to turn into Sugar Ray Leonard’s successor fighting those guys.

Arum might have been over the moon, but of the boxing fans that paid $70 to watch the Crawford vs. Khan fight on ESPN pay-per-view were less than pleased to see Crawford hitting Khan with a low that caused the fight to be stopped in the sixth round. The low blow wasn’t very Leonard-esque by Crawford. It was more like Andrew Golota-esque.

The boxing fans at Madison Square Garden were none too pleased at seeing the Crawford-Khan fight that they paid to watch being stopped by a low blow from Crawford. Never mind that some boxing fans think Khan quit. The fact of the matter is, Crawford hit him low and then the fight was over. The fans at home were equally angry at the ending of the fight.

Congrats to Terence “Bud” Crawford on another spectacular victory. There is no question that Bud is the best welterweight in the world and the rightful successor to Sugar Ray Leonard.

After the fight was over, Arum climbed into the ring and went on a long rant at how manager Al Haymon needs to let his fighter IBF welterweight champion Errol Spence face Crawford. Arum then suggested that fans should boycott Haymon’s fighters’ fights until he lets Spence fight Crawford. It looked to some boxing fans at the time like Arum was trying to distract from the horrible ending of the Crawford vs. Khan fight by talking up a Crawford-Spence match.

It’ hard to take Arum seriously when he compares his Top Rank fighters from guys from the past. First it was Vasily Lomachenko being in the same league as Muhammad Ali in terms of boxing skills, and now it’s Crawford being the successor for Leonard. Crawford fights nothing like Leonard, even the old Leonard towards the end of his career. Leonard was always a combination puncher with blazing hand speed, and he brought a sense of theatrics into his fight. At 5’10” Leonard was taller than the 5’8″ Crawford, and he more an offensive-minded fighter. Crawford is a counter puncher, who switches stances constantly.

Leonard never wasted his time with changing stances in his fights. He was all action. He didn’t need to try and confuse his opponents by switching stances in order to keep from throwing punches. Leonard was too busy going on the attack. Crawford never went to the Olympics, so he’s not in Leonard’s in that category. Crawford hasn’t won five world titles like Leonard. Crawford has captured three division titles. For him to equal or surpass Leonard, Crawford would need to win world titles at 154 and 160 to equal Leonard. To pass him, Crawford would need to move up to 168 or 175 to win a world title. Leonard moved up to 175 and won a world title. It would be interesting to see if Crawford could do that. Would Crawford beat the likes of Artur Beterbiev, Oleksandr Gvozdyk, Sergey Kovalev, Marcus Browne or Dmitry Bivol?

Thus far, Crawford’s best fights have come against these guys:

None of those guys are considered the best fighters in their weight classes. Crawford has fought a lot of middle of the road fighters in the 135, 140 and 147 lb division. He’s not done anywhere near what Sugar Ray Leonard did during his career, and doesn’t fight like him. Crawford’s style of fighting is entirely different than Leonard’s. If Crawford had an exciting style of fighting instead of his counter punching style, he would already be a huge star. He’s clearly not a big star, because he doesn’t have the style that attracts fans, and his match-making has been too careful.

If he’s serious about wanting Crawford as the successor to Sugar Ray Leonard, then Arum needs to have change his counter punching, switch-hitting style of fighting and have go on the attack more in his fights to make him a combination puncher the way Sugar Ray was. Crawford is a one punch at a time fighter. That’s NOT how Leonard used to fight. Arum of all people should remember how Leonard fought, because he was around back then. The younger boxing fans only have to take a glance on Leonard’s highlight videos on Youtube to realize that he was a MUCH more entertaining fighter than Crawford, and a completely different fighter. The two have nothing in common. When Leonard was young, he was outgoing, charismatic, friendly, slow to temper, and an incredibly popular guy. Crawford is more laid back, less smiley, and not as out-going. Crawford might be the successor to some fighters that lived in the past, but Leonard isn’t one of them. Crawford fights nothing like Leonard, and he’ll never be like him, because he’s different type of fighter and has a completely different personality. Leonard was Hollywood when he was young. Crawford isn’t like that at all.


« Khan: I was still in the Crawford fight

Anthony Joshua vs. Andy Ruiz in the works for June 1 at MSG »