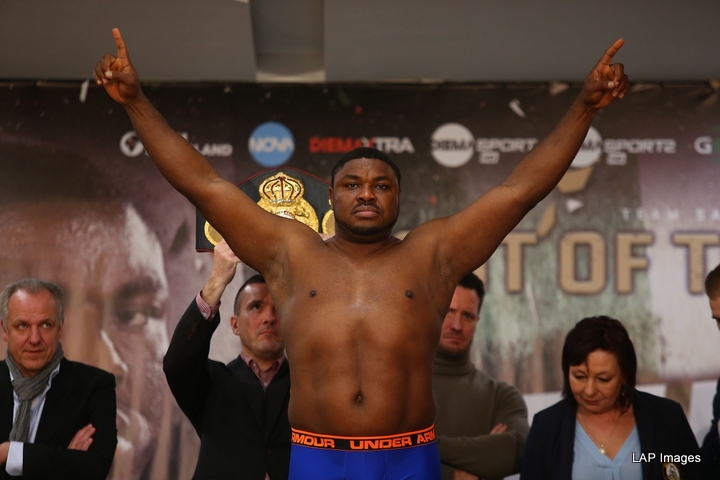 By Mike Smith: Former WBC heavyweight champion Samuel Peter will be fighting next month against little known journeyman Mario Heredia (15-6-1, 13 KOs) in an eight round contest on April 13 in a non-televised portion of the Claressa Shields vs. Christina Hammer fight card on Showtime at the Boardwalk Hall, in Atlantic City, New Jersey.

Peter (37-6, 30 KOs) has the punching power to give any heavyweight in the division problems if he can land his shots. What he lacks is stamina, defensive skills, height, reach and the youth to get the job against the better heavyweight. At 6’2″, Peter is somewhat short for the heavyweight division. There are some heavyweights that height that can do well, but not many.

Peter’s weight is the central issue. He weighed 271 lbs for his fight with Kubrat Pulev, and 262 lbs for his last fight in February. Considering that Peter’s best weight was in the low 240s, he’s carrying around too much fat for him to be a factor in the division. If Peter could get with a good trainer that could work on his weight, he might be able to make a run at a title. However, you have to question that’s going to happen at this point in his career.

The 38-year-old Peter is making his second fight of his comeback after returning to the ring last February in stopping journeyman Gerardo Escobar (2-22, 1 KOs) in the first round in Tijuana, Mexico. Before that fight, Peter, nicknamed, “The Nigerian Nightmare,” had been action for over two years since his third round stoppage loss to Kubrat Pulev in December 2016.

It’s unknown what Peter is coming back for. If the goal is for Peter to get a crack at a world title, then he’s going to need to be matched against weaker opposition. It was a mistake for Peter to face Pulev. That was a bad match-up for Peter. Maybe if he was still in his prime of his career back in 2004 and 2005, when he almost knocked out Wladimir Klitschko. Peter was a dangerous puncher back then, and a guy that was feared. After Peter’s eighth round stoppage loss to Vitali Klitschko in 2008, his career floundered from that point on. Peter suffered further losses to Eddie Chambers, Wladimir and Robert Helenius before losing to Pulev.

Peter shouldn’t have any problems beating the 26-year-old Heredia. There’s a big difference in pedigree between the two heavyweights. As long as Peter doesn’t gas out in this fight, he should easily win. Heredia likely won’t hang around long enough to test Peter’s conditioning.