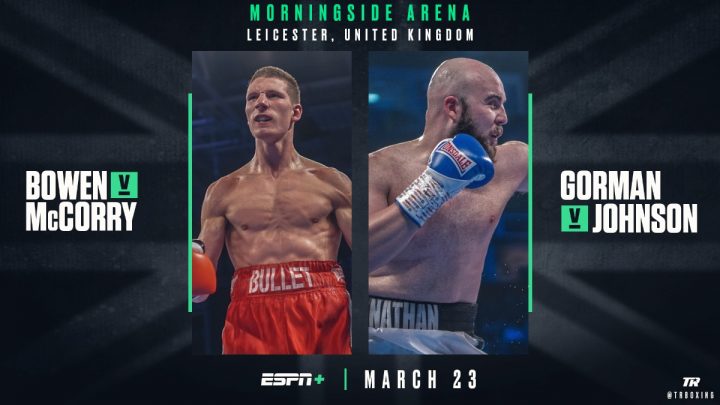 Two of Great Britain’s most promising young prospects will be showcased live in the United States on Saturday afternoon.

In the main event from Morningside Arena in Leicester, England, Sam Bowen will make the first defense of his British super featherweight title against Jordan McCorry. And, in the co-feature, heavyweight hopeful Nathan Gorman will fight former world title challenger Kevin “Kingpin” Johnson in a 12-rounder.

Bowen (14-0, 10 KOs) is coming off a banner 2018 in which he knocked out Maxi Hughes in eight rounds to win the vacant British super featherweight title and knocked out Horacio Alfredo Cabral in four to pick up the WBO Intercontinental belt. His first British title defense comes against McCorry (17-4-1, 4 KOs), who is looking to rebound from a competitive decision loss to Patrick Kinigamazi.

Gorman (15-0, 11 KOs) is one of Britain’s top heavyweights, a 22-year-old boxer-puncher who is making his 2019 debut after a successful 4-0 campaign in 2018. In his last bout, Dec. 22 in Manchester, England, he dominated former world title challenger Razvan Cojanu over 12 rounds to score a near-shutout decision. Johnson (34-12-1, 18 KOs) is a 16-year-pro who has fought many of this generation’s leading heavyweights, including Vitali Klitschko, Kubrat Pulev, Anthony Joshua and Tyson Fury. He has only been knocked out twice as a pro.

About ESPN+
ESPN+, which surpassed one million paying subscribers in just five months, is the premium multi-sport, direct-to-consumer video service from The Walt Disney Company’s Direct-to-Consumer and International (DTCI) segment and ESPN. It offers fans thousands of additional live events, on-demand content and original programming not available on ESPN’s linear TV or digital networks, along with premium editorial content