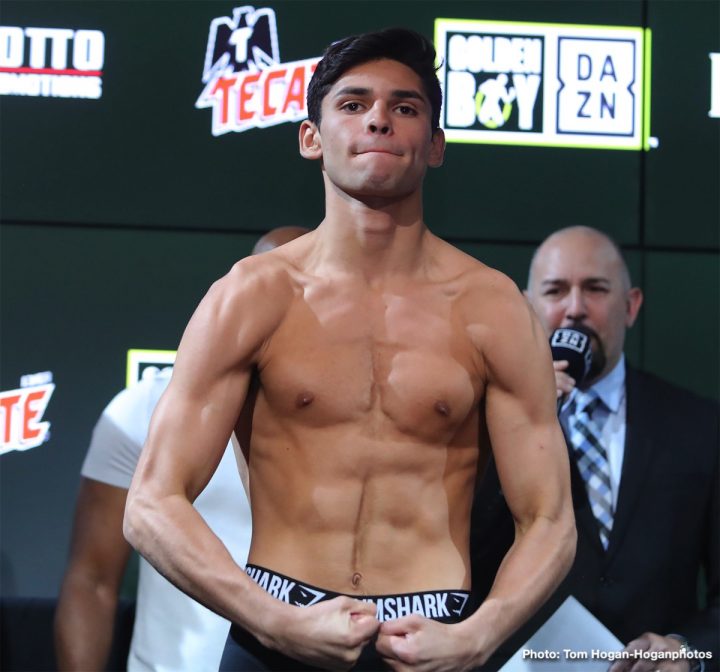 Popular lightweight prospect Ryan Garcia (17-0, 14 KOs) will look to inch closer to a world title opportunity when he returns against Jose “Wonder Boy” Lopez (20-3-1, 14 KOs) in a 10-round battle that will headline a stacked night of Golden Boy action. The event will take place on Saturday, March 30, 2019 at Fantasy Springs Resort Casino in Indio, Calif. and will be streamed live on DAZN .

“These are the kinds of fights that Ryan Garcia must win to become a world champion,” said Oscar De La Hoya, CEO and Chairman of Golden Boy Promotions. “He has all the makings of a global star, so it will be interesting to see how he can overcome this challenge. At the same time, Lopez is a tough fighter who really needs a win, so he’ll do everything he can to end Ryan’s undefeated streak. I expect a sold-out crowd at Fantasy Springs Resort Casino to be present for a full card of action and on the best platform in boxing, DAZN.”

Garcia is a rising talent who had a spectacular year in 2018, fighting four times and earning the NABF and NABO Super Featherweight Titles. The 20-year-old native of Victorville, Calif. also made an important change to his stable, adding Eddy Reynoso as his head trainer before stopping Braulio “El Chavo” Rodriguez in his last bout. Garcia plans to demonstrate new skills as he seeks to earn a shot at a title.

“I’m excited to come back for my first fight of 2019,” said Ryan Garcia. “We sold out Fantasy Springs last March when I knocked out Fernando Vargas, and I expect this fight to be exactly the same: a big win in front of a huge crowd. Let’s get this win!”

Lopez is a 24-year-old contender who has earned two regional titles since making his debut in September 2011. The native of Carolina, Puerto Rico has fought the likes of Jonathan “Polvo” Oquendo and Avery Sparrow. Lopez’s biggest win was against Miguel Angel “Miguelito” Gonzalez in April of last year, and he’ll look to prevent Garcia from becoming a big star in the sport.

“I’m very excited for this opportunity,” said Jose Lopez. “Ryan is a great fighter and a top prospect at Golden Boy. I know the challenge that I have in front of me, and I am getting ready to make a great fight. I will get the victory no matter what.”

“This is a great fight for both fighters,” said Miguel Cotto, President of Miguel Cotto Promotions. “This will be a classic battle between two young lions. Anything can happen inside the ring, so you can’t miss this fight.”

In the co-main event, hard-hitting Angel “Tito” Acosta (19-1, 19 KOs) of San Juan, Puerto Rico will defend his WBO Light Flyweight Title against Ganigan “El Maravilla” Lopez (35-8, 19 KOs) of Mexico City, Mexico in a 12-round battle. Acosta, who is part of a co-promotion with Miguel Cotto Promotions, is coming off a sensational first-round knockout win over Abraham “Choko” Rodriguez in October 2018.

Rising super featherweight Eduardo “Rocky” Hernandez (27-0, 24 KOs) will make his debut in the United States when he takes on Ibrahim Class (22-5, 10 KOs) of Dar es Salaam, Tazania in a 10-round clash. Hernandez is co-promoted by Promociones del Pueblo as Golden Boy looks to introduce yet another future Mexican star to an even larger audience.

NABO Featherweight Champion Joet Gonzalez (21-0, 12 KOs) will defend his regional strap in a 10-round fight.

Antonio “Relentless” Orozco (27-1, 17 KOs) will return to the ring after his first world title opportunity in a 10-round super lightweight fight.

Danielito Zorrilla (10-0, 8 KOs) of Rio Piedras, Puerto Rico will participate in an eight-round battle in the super lightweight division.

Neeco “The Rooster” Macias (17-1, 10 KOs) will look to bounce back from his first loss in an eight-round super lightweight fight.

Garcia vs. Lopez is a 10-round lightweight fight presented by Golden Boy Promotions and Miguel Cotto Promotions. The event is sponsored by Tecate, “THE OFFICIAL BEER OF BOXING” and Hennessy “Never Stop. Never Settle.” The event will take place Saturday, March 30, 2019 at Fantasy Springs Resort Casino in Indio, Calif. and will be streamed live exclusively on DAZN.