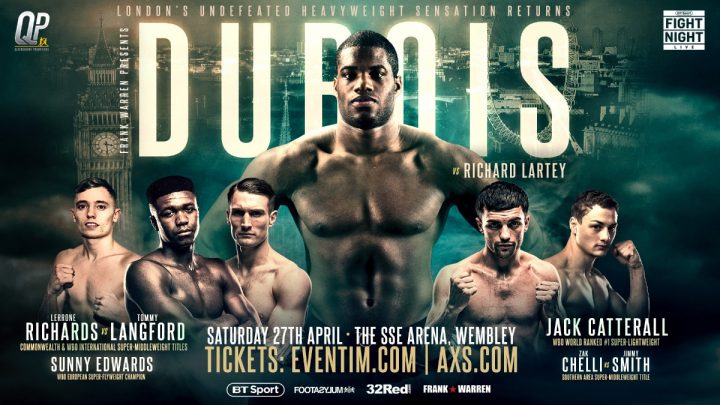 FRANK WARREN held a press conference in London today to announce a show featuring some of British boxing’s best prospects at The SSE Arena, Wembley on Saturday April 27.

WBO super-lightweight mandatory contender Jack Catterall (23-0, 12KOs) has a non-title ten rounder under the lights as he prepares for a crack at Maurice Hooker’s world title.

Here are a selection of quotes from today’s presser:

News:
Dubois And Joyce To Battle For European Title

“It will be a terrific show because these guys are great talents. They have the platform to be the next big stars of boxing. It is a another big step up for Daniel, but I have confidence in him. He is a star in the making. If it was about who punches hardest Daniel would be up there, but he needs experience. He will fight Nathan Gorman this year and whoever wins will be knocking on the door. British heavyweights are coming along like buses and we’re blessed with them.”

“I’ve seen a few videos of Lartey and he will throw punches. I am looking forward to the challenge, but I will get a victory. They say he is a big puncher, but I will perform. It feels good to be topping the bill at Wembley. I want Nathan Gorman, definitely. It is good the fight is building up and getting bigger. I’m ready for him, but I have nothing to say to him. I’m ready for challenges in my career.”

“This is a great opportunity and I cannot wait to showcase my skills. I box smart, I fight smart, bring science and I will show on the night what I am all about. This isn’t an easy fight at all. Tommy is a very good boxer and intelligent. It will be as easy as I want to make it. People underestimate my power and if I rock Tommy Langford I will stop him.”

“I carry my personality into the ring – my style and flair. I don’t ever see myself ever doing anything else in my life. I have built momentum and I am looking to push on. I have been bottom of the bill, but I deserve these TV chances. I love the entertainment aspect of the sport, the back and forth. Some people think I am cocky and arrogant, but in my last two fights I have backed it up against Ryan Farrag and Junior Granados. I don’t sit on a cloud believing my hype, but at my best I can mix with any boxer of a similar weight.”

“I am just looking forward to getting active after being injured. The British champion Sam Bowen is a great fighter, but so am I and we will meet. The fight is going to happen and I am here to box great fighters. I have boxed all around the world and know what I am able to do. I just need to get active and I will be ready for Sam.

“Some of my fights have been tough and they have got me in this position. Jimmy is a durable opponent and I’m training for ten rounds, but I might win quicker. Jimmy likes to come forward, but I will show my skill.

“When I got the call I jumped at the chance. This is an amazing opportunity and the hard work has paid off. Zak is a good talent, but I believe I’ve seen things. Winning this fight means everything.”