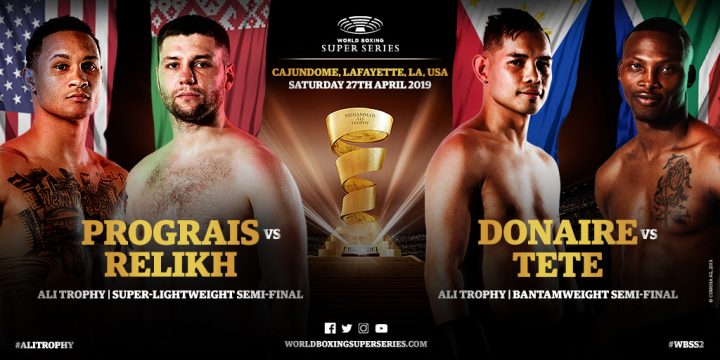 Regis Prograis & Kiryl Relikh and Nonito Donaire & Zolani Tete continue their pursuit for the Ali Trophy on April 27 at the Cajundome in Lafayette, Louisiana, USA. Tickets on sale next Friday.

The sensational doubleheader opens the semi-final stage of the World Boxing Super Series.

“Fighting in Lafayette is a perfect situation for me because it’s halfway between my two homes Houston and New Orleans,” said Prograis, the WBC Diamond Champion. “I can’t wait to come out and put in a historical event.”

“We are thrilled to bring the Ali Trophy lights to Lafayette kickoff the semi-finals of the World Boxing Super Series,” said Kalle Sauerland, Comosa’s Chief Boxing Officer. “The fans in Lafayette and around the world can look forward to two unbelievable blockbusters with the best production in the game all on one night.

“The WBSS is about the best fighting the best and to serve up Fight of the Year contenders in the quest for the Ali Trophy and the supreme international superstars involved in this doubleheader at the Cajundome on April 27 will deliver just that .”

Fans wanting to buy tickets are encouraged to sign-up to Ticket Alerts to receive emails reminders when tickets go on sale here.

The road to Lafayette

October 7 in Yokohama, Japan Kiryl Relikh defeated Russia’s Eduard Troyanovsky by a unanimous decision, with all judges scoring it 115-113 in favour of ‘Mad Bee’, to reach the semi-final, while tournament No.1 seed Regis Prograis advanced in more dominant fashion on October 27 in New Orleans, also via a unanimous decision, over the UK’s Terry Flanagan. The judges had it 119-108, 118-109, 117-110 for ‘Rougarou’.

“I know Relikh is a tough and strong fighter and I never look over an opponent but I have no doubt in my mind that I will win,” said Prograis. “I’m looking very much to the semi-final and the quest for the Ali Trophy,” said WBA Champion Relikh. “When I fight the fans will get the money’s worth. I predict just like all of my fights a win for me.”

October 13 in Ekaterinburg, Russia Zolani Tete outpointed Russia’s Mikhail Alo-yan with scores of 114-110, 114-111 and 114-111 for the ‘Last Born’, when he booked his place in the semi-final. Nonito ‘The Filipino Flash’ Donaire, a four-division world champion, won his quarter-final on November 3 in Glasgow, Scotland as No.1 seed, Northern Ireland’s Ryan Burnett, was forced to retire from the fight after four rounds of action due to a lower back injury.

“Tete is a formidable opponent and we have been preparing since the last fight. I’m even more excited with it being in the U.S. and won’t waste the opportunity to show the crowd what we’ve been working on,” said Donaire, WBA titleholder.

“Nonito Donaire is a true champion and has had a lot of success against my fellow countrymen like Moruti Mthalane and Jeffrey Mathebula in the past, but that stops here,” said WBO Champion Tete. “I respect Nonito, but I have a lot of faith in my own boxing ability and I will come out victorious when we fight.”

Tickets from $25 for the WBSS Super-Lightweight and Bantamweight Semi-Finals – Regis Prograis vs Kiryl Relikh and Nonito Donaire vs Zolani Tete – at the Cajundome in Lafayette, LA, USA April 27 are now on sale.


« Rahman Jr: Mikey Garcia might get KO’d in 1st round by Spence

Dereck Chisora vs. Senad Gashi on April 20 on Sky »